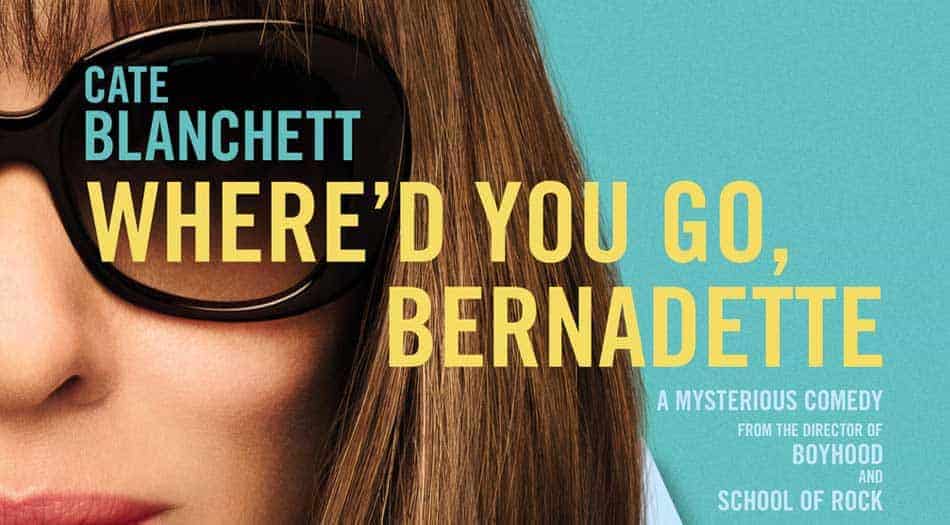 ​Originally slated for a March 22nd release, ‘Where’d You Go, Bernadette’ is finally here! Good! I can see it again. This is one of the most distinct and intelligent films to come out in quite some time. It’s based on the 2012 best-selling novel of the same name by Maria Semple, which I didn’t know until after watching the movie. I felt that there was so much more to Bernadette than what the film could expose so learning that made that feeling make sense. Nonetheless, it’s excellent. I must insist you drop what you’re doing right away and see this! Especially if you’re a fan of Cate Blanchett. She’s phenomenal in this magnificent little oddity; a performance you must witness for yourself.

She plays Bernadette Fox, an eccentric recluse, architect, and icon. At one time in her career, she stood alone in the once male-dominated business of Green home building. Successful or not, she walked away. She left the architecture game when the purchase of her magnum opus called the ‘Twenty Mile House,’ goes to someone who plans to and does, destroy it. She takes this as a personal insult. Having put so much time and energy into something she loved and have someone carelessly discard it was more than she could stand. After, she not only lost her ability to create, she lost a little of herself, too.

Though she misses being creative, she marries Elgie (Crudup) and has a daughter named Bee, played by newcomer, Emma Nelson. She and Bee are incredibly close. At one point, Bernadette says that Bee is the only person she can stand. You do recall my just saying she was married, right? She’s oddly detached from him, reality and everyone around her. Elgie works all of the time so shopping online, taking care of Bee’s needs and working on the old mansion they purchased, keeps her busy most days. These tasks also help keep her from sinking into depression, however, they don’t seem to be doing the trick these days. What finally does is a planned family trip to Antarctica that she ends up taking on her own. On this trip, she reconnects with Bernadette and rediscovers she once had passion.

My suggestion to you is to not watch any trailers because the film will be much more appealing if you go in without knowing too much beforehand. The movie is narrated by Bee at the time she and her father search for her mother and it needs to unfold naturally as the author originally intended.

Director Richard Linklater (Dazed and Confused, Boyhood) does do a good job of not revealing things about Bernadette too soon. By doing this, he keeps you wondering why she has become the woman she is. ‘Where’d You Go, Bernadette,’ has an extraordinary cadence that only Blanchett could have made work which keeps you on the edge of your seat to learn at exactly what moment did this once brilliant mind turn into a despondent, manic, ill-tempered, creator of mischief. In fact, like me, you may find this movie so compelling, you’ll have to run to the store to purchase the book.

@peepso_user_7832(NicoleMcNeely1) Cate deserves an Oscar nomination for this film. She is PHENOMENAL in it. FANTASTIC movie!! I highly recommend it.
1 person likes this