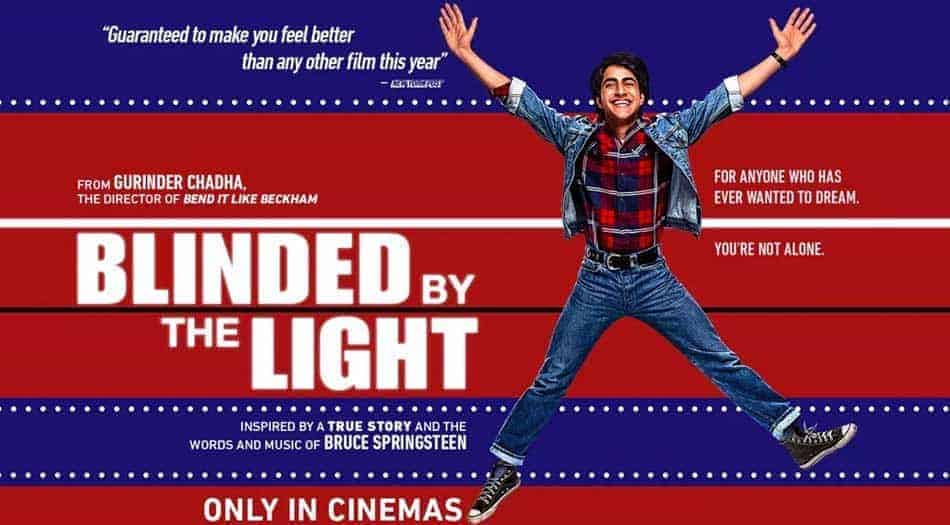 Blinded by the Light is an incredibly inspirational film. It’s the story of a Pakistani teenager named Javed (Viveik Kalra) who’s going through a tremendous identity crisis. In a unique fashion, his story shows us that the most important thing in life is to discover who we are. Growing beyond childhood regularly takes being forced into it when we’re not ready. That nudge ofttimes comes from the most unlikely of places. It certainly does in Javed’s case.

Set in 1987, the movie is based on the real-life events of Sarfraz Meera’s life. He not only helped write the script but also the book the film is based on which is his acclaimed memoir called, ‘Greetings from Bury Park.’ This is more or less the retelling of how he went from boy to man.

Activated and armed with lyrics to Bruce Springsteen’s most inspirational songs, Javed’s aimed, locked and loaded, ready to meet any challenge that comes his way. But before his introduction to ‘the boss,’ he believed that it would be impossible for a shy boy to leave the tiny town of Luton, England, where he grew up, and make anything of himself. Through his friend Roops (Aaron Phagura), a Sikh student, Javed finds the music that changes his life forever. That music is the compositions arranged and produced by Bruce Springsteen in the seventies and eighties, seemingly for the blue-collar workers, he was raised by.

Springsteen songs were psalms that spoke to Javed and conveyed the course in which to set his life. The mountain he had to climb over was not only the racial discrimination of Thatcher’s England but that his family was always economically challenged. His culture says that being the male heir, it’s his responsibility to stay home and help the family rather than to chase his dreams of becoming a writer. His mother and father came to England with visions of their children doing much better than they did. A career in writing promises no such thing. If he leaves to pursue this life, he does so without the support of his father. But being encouraged to take that leap of faith by his teacher and the words of this powerful musician, no other input is needed or welcomed, and threats carry no weight. Javed knows that just because the life his father wanted didn’t materialize for him, it doesn’t mean that outcome will be the same for him. He had faith that if he stuck with it he’d eventually become a successful writer.

Gurinder Chadha, the writer, director, and producer who brought not only this thought-provoking tale to life but also brought us ‘Bend it like Beckham,’ is very creative in telling this story. The lyrics are so important and parallel Javed’s life to such a degree that she makes sure her audience doesn’t miss that point. There are a number of times she projects the lyrics across the screen as the soundtrack plays, something not usually done in your typical narrative. There are even a few musical numbers you don’t see coming and a sweet teenage love story, as well. With Javed’s decisions and her unprecedented style, Chadha touches the ‘Hungry Heart’ in all of us who hope for a happy ending. Viveik Kalra was the perfect choice to play the dreamy eyed teen. As the story progresses, he stays somewhat innocent looking but at the same time he appears to mature and to wise up about life withing the two hours it takes to get through the film. She gets topnotch performances from her entire cast of relatively unknowns and manages to make us all Springsteen fans while she’s at it… or reminds us of why we liked him in the first place.

Blinded by the Light