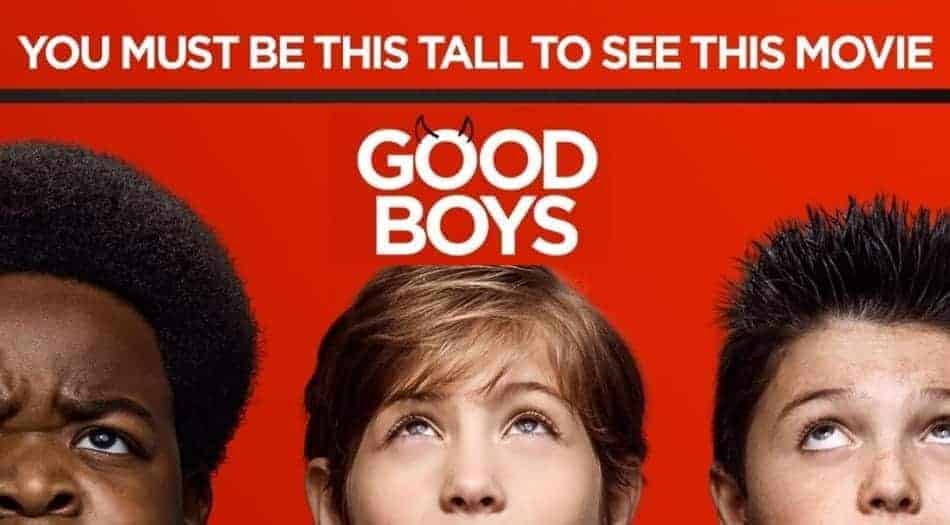 “Good Boys” sets up in the same tradition as “Super Bad” or “Booksmart”. There are people who hear of a wild and crazy party that will be held soon. They make up their minds that they will do anything to attend. But the guys who hear of the party are not college-age. They are not even high school age. They are in sixth-grade, and the big shindig in question is a ‘kissing party’ in the basement of one of the ‘cool kids’ from school. To them, it is a chance to get up into the ‘cool kid’ ranks, and one of them will meet up with the girl on whom he has a crush.

Max (Jacob Tremblay) has his best friends Thor (Brady Noon) and Lucas (Keith L. Williams). They have been good buddies since kindergarten, and now they are really close. Max’s dad (Will Forte) is going out of town, and he tells Max that nothing can happen to the new drone. His dad uses it for work and it is NOT a toy. The three of them hear about a party Friday night. It will have a mix of boys and girls – and it will be a ‘kissing party’. They are excited to go, but they have no idea about how to kiss. They try to research it on the Internet – with some NSFW (Not Safe For Work) results. Max knows of a high school girl down the street who is always smooching with her boyfriend. If there was only some device that they could use to spy on the girl…

The two girls from down the street are high-school seniors named Hannah (Molly Gordon) and Lily (Midori Francis). Hannah’s boyfriend is a college frat boy, but he drops her that day. But he leaves a bottle containing illicit drugs (Molly). The two girls are going to take it and go to a concert, but they are interrupted by the boys flying the drone above their heads. They catch the drone, and the boys want it back. But the young scoundrels make off with Hannah’s purse. It contains the drugs, so there is meeting and stand-off at the playground. The guys finally get the drone, and they also take off and keep the purse/drugs. But they by mistake destroy the drone…

So, the three boys will need to ditch school and go on quest to get a replacement drone. They will need to keep Hannah and Lily from finding them and getting the drugs back. Max and Lucas and Thor have a journey set up for them. They need to ride their bikes for 4 miles to the mall and pick up a new drone. They got the money to purchase it after an odd incident in which they sold a special ‘CPR Dummy’ (that looks a lot like a sex doll) to some random pervy guy that they found. They have run-ins with severe shoulder displacement, an off-duty cop in a quick mart store, crossing freeway traffic without a crosswalk, and a paintball shoot-out at a frat house.

The boys are ‘good’ boys, in terms of being sweet and innocent. They take the perils and pitfalls of their unusual day in stride. The finally get things settled, and Max does sneak out to the ‘kissing party’.  They can handle everything because they rely on each other for help and assistance. Thor is able to admit that he really likes the Theater Club. Lucas develops more friends in the School Council Against Bullying (which goes by the unfortunate acronym of S.C.A.B.). Each of them is finding that other friends can be found in the neighborhood. But they will never forget the true friendship that they have with each other.

Because there is some grown-up use of vulgar language (read: multiple F-Bombs) and some drug talk and some sexual innuendo – these kids who star in this movie would not be old enough to see it. At least, not without Adult Supervision. But that is the funny twist to this movie. In most other raunchy teen comedies, the stars are usually teens or very young adults. But this is a movie staring ‘tweens’, and is hilarious to see them get into the same level of oddball situations as in the other R-rated movies. So, mark that up as a bonus in its favor.

The movie would totally fall apart if it did not the right level of talent in the young stars. But it has three fine performers in Jacob Tremblay, Keith L. Williams and Brady Noon. Playing Max, Lucas and Thor – they hit all the right notes as BFF buddies who need each other for support and friendship. They drop quite a verbal assault on the ears with multiple crude words, but each one looks like such a nice boy. They are naive and unknowing about many ‘adult’ things. That is a big part of the humor, when you see them mistake anal beads for a fancy necklace.