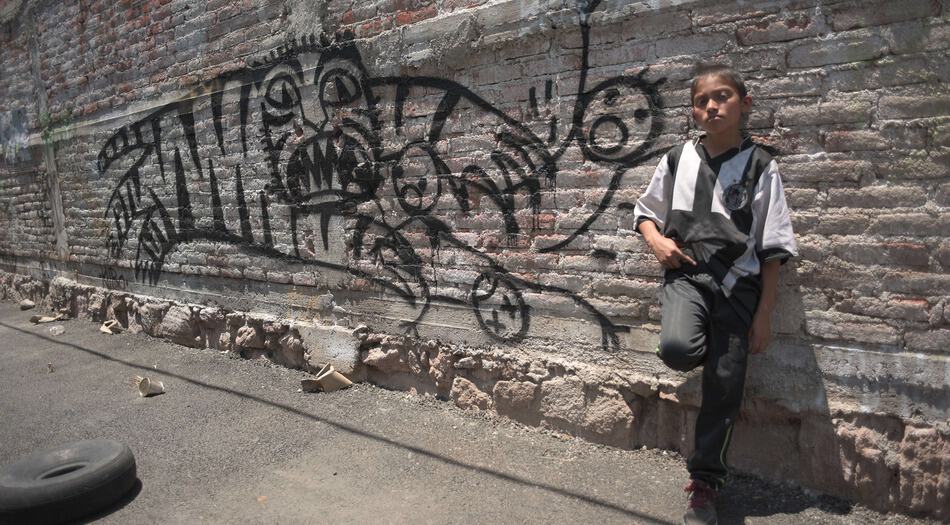 The film opens by throwing incredibly frightening statistics out at us. We’re told that in Mexico, since 2006 which was when the ‘war on drugs’ began, 160,000 people have been killed and that 53,000 have ‘disappeared.’ And those numbers don’t include the children!

These unfortunate individuals have simply been callously disregarded. Stephen King called ‘Tigers Are Not Afraid’ a terrific film and said that while watching it, he was, ‘Under its spell.’ Guillermo Del Toro has endorsed it by saying it was, ‘Innovative. Compassionate and mesmerizing.’ I don’t know about you, but that’s all I needed to hear.

You first see the statistics of the drug war, and then you meet the players of the film. Children forced to grow up far too early. They’re orphaned because the cartel has moved in and murdered their parents. Whenever they like, the cartel still comes in and picks off the children that they need for various reasons. Some of these are too unimaginable to consider. The kids range in ages from about seven to ten. With no choice, they have created for themselves patriarchy that works. Their leader, Shine (Juan Ramón López) takes good care of them teaching them what they need to know to live another day. Reluctantly, Shine allows a newly orphaned girl, Estrella (Paola Lara) into the group. They don’t realize it but are suddenly aware of what has been missing; the feminine vibe. She comes loaded with three magical wishes. These wishes will be used to combat men who have been killing their families.

These children, though very young, refuse to be victims any longer. With magic on their side, they develop a plan to take down the leader of the cartel and be free of, not only the ghosts that haunt them but of the evil presence of the entire cartel itself. Cut off the head, and the body will die.

This movie is what filmmaking is all about. It doesn’t have glitz and glamour and doesn’t try to be something it is not. It’s dark, but it needed to be. Writer-Director Issa López takes the worlds grim realities and turns them into entertaining fantasy without ever losing focus of the main subject, the orphaned children. They never have time to be innocent and play. López is almost cruel when she shows the faces of the children when they finally do… for a moment. A short moment at that. Her characters are brave, hard yet loving at the same time. They’re the worlds hope if they can make it through today.

*See it today in Phoenix at Filmbar!

Tigers Are Not Afraid