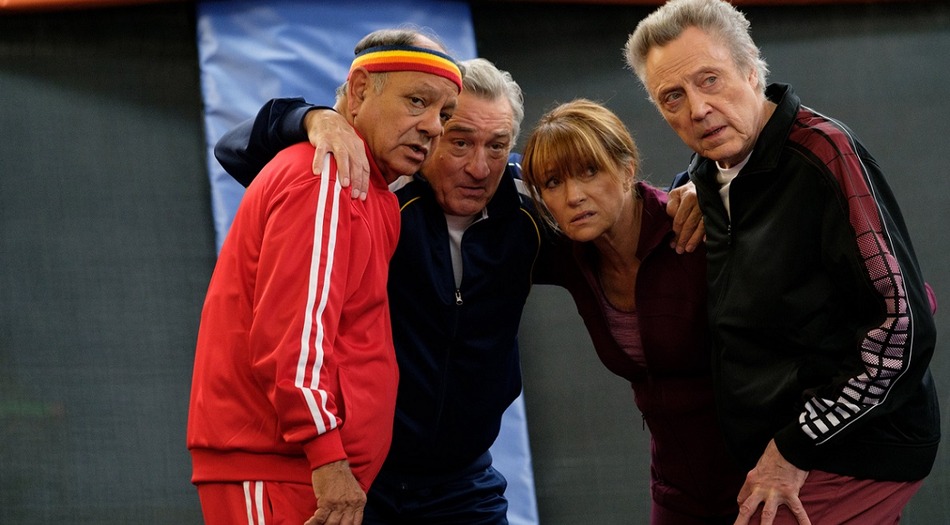 In case you weren’t aware, ‘The War With Grandpa’ is based on an award-winning children’s book of the same name written by Robert Kimmel Smith.

That said, it’s geared toward the young, but the plot itself is very much suited for any lover of the cinema to enjoy. This movie is for the kids but trust me when I say that if you’re in a situation where you’re asked to view this, you won’t mind sitting through the flick.

The actors in ‘The War With Grandpa’ are definitely out of their element here. I say that to mention how unusual it is to see these particular thespians in these types of roles, giving it almost the sole reason to put in the time. When you think of them, you immediately picture them in their stereotypical tough guy parts. When you see them here, their appearances are so shocking that it’s ludicrous. You don’t usually witness Robert De Niro playing the grandpa or Cheech Marin and Christopher Walken playing the senior citizens in the park, wearing running suits, and drooling over every woman that goes by. Well, you’ll get that here in a way only they could make work.

The story is that grandpa or Ed, played by De Niro, a recent widower, is becoming a danger to himself and others. When she sees that her father is no longer capable of adequately caring for himself, his daughter Sally (Thurman), insists he come home with her. Ed’s reluctant to give up the home he and his wife shared and lets her know that he’s less than enthusiastic about the move. His feelings mostly come from the fact that he believes the unwritten rule of fish and relatives smelling after three days to be true.

Once he gives in and the move happens, everyone in the family is fine with Ed’s staying, except for Peter (Fegley), who has to give up his perfect bedroom. He’s even more frustrated when he finds that he’s being relocated to the uncomfortable, leaky attic that has bats and mice. Myself, I’d think a boy in sixth grade wouldn’t mind this sort of arrangement, but you’d think his parents would have at least gotten rid of the pests first! I gave them too much credit, I guess. Peter plays nice for a short time, but with this situation and being teased by some older students at school, he can no longer maintain his composure. He gets tips from his best friends and decides it’s time to send his grandfather a Declaration of War. In part, it states that Ed has twenty-four hours to give Peter back what is his or face the consequences. The winner of said war gets the bedroom. However, Peter doesn’t realize that grandpa has been on a real battlefield and is more prepared than Peter would like.

Director Tim Hill wrote for ‘Spongebob Square Pants,’ so he knows how to deal with a spoiled brat, and so does grandpa. The war begins once battle lines are drawn, and terms are agreed to by both parties. They now go by the Secret Warrior and the Senior Soldier. From here, okay, from the start, the script isn’t that complicated. You’ll see most of the jokes coming from a mile away, but it’s entertaining, nonetheless.

When Ed goes to his friends, letting them know of the unsophisticated armature he’s dealing with, you’ll find the dialogue they interject quite amusing. They also willingly get wrangled into combat with their friend. Ed also manages to pick up Diane, a new female friend, along the way. Diane, who has more than once gotten into fisticuffs with her own grandchild, is ready to attack. The talented and beautiful Jane Seymour plays this part.

With so little being released these days, you may wonder if ‘The War With Grandpa’ is a De Niro film you should skip and instead watch a classic of his. I have to ask that you don’t look at it that way. Go in it knowing what you’re getting, appreciate the story for what it is, and embrace the silly. Once you get over the fact that Ed isn’t the guy from ‘The Godfather,’ ‘Goodfellas,’ or ‘Casino,’ you’ll have a more enjoyable time.

The War With Grandpa