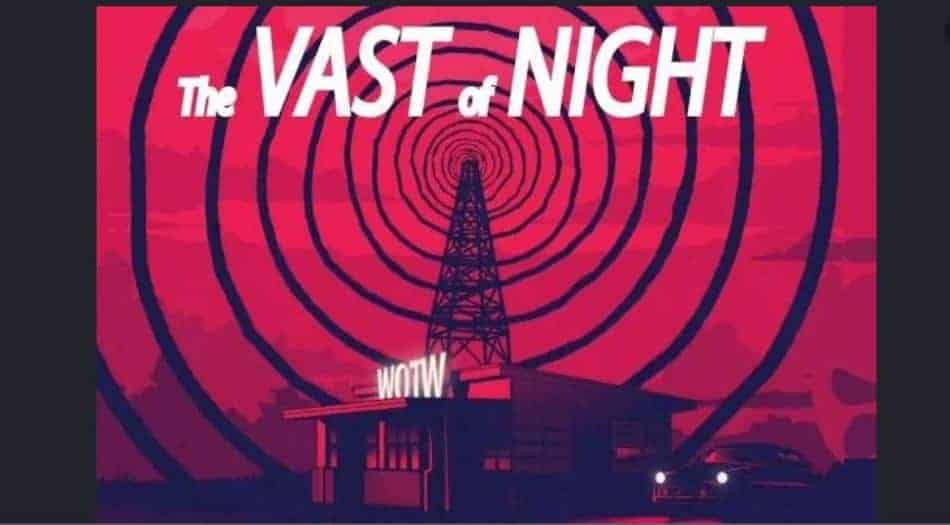 “The Vast of Night” follows the nighttime adventures of two people in a very tiny town beset by mysteries. This is wonderful original science-fiction independent production that seems destined to be reaching for higher places. The setting is in the early 1950’s in a small town located in New Mexico. But the real heart of this film is in the fine line that it walks between homage to early TV shows (“The Twilight Zone”, “The Outer Limits”) and the nostalgic embrace of past eras — such as seen in “American Graffiti” and even “Stranger Things”.

Back in the 50’s, when the local radio DJ was a minor celebrity — being stuck in one-horse town was usually boring. It is Friday, and the high school basketball team is on tap for the first game. Almost everyone in the town is at the game. The few that are elsewhere are Fay Crocker (Sierra McCormick) and the ‘famous’ DJ Everett (Jake Horowitz). Fay is running the local phone company operator switchboard. She actually uses the long wires with plugs to connect various calls. She is listening to Everett on the radio, as she works the few calls that come into the board. But she hears some odd sounds from the radio broadcast, and she gets a couple of odd phone calls.

There is that strange sound that she hears, and now it is also on the phone line. She gets together with Everett and they decide to investigate together. He plays the sound again over the air, and invites callers to comment. There is a call from Billy (Bruce Davis), who is an older Black man with some ‘unusual’ experiences in the military. He has heard that same sound – but he does not know the source. Could it be from a top secret government agency, or a military operation? Everett thinks it could be from Russian spies. Then a new caller named Mabel (Gail Cronauer) tells the radio audience that these sounds are out-of-this-world.

Everett and Fay are caught up in a whirlpool of fantastic stories and potential Earth-shattering events. But they do not know who can be believed. The do not know which parts of these stories might be true. Based on the fear of the unknown — or maybe the excitement of perhaps finding out — they both delve into a cat-and-mouse chase to see if there are any things they can sort out as truth. Because – as people would know far into the future — “The Truth is Out There”.

“The Vast of Night” takes a fresh and original look at some old subjects, such as weird suspected extraterrestrial activity and government conspiracies. But giving it a new perspective as a 1950’s era discovery of all these odd happenings, it becomes a revealing blast from the past. Andrew Patterson has fashioned a perfect time capsule as a set piece. The story by James Montague and Craig W. Sanger takes all the small details and puts a little punch into the development and the structure. The fine acting from Sierra McCormick (Fay) and Jake Horowitz (Everett) make for a believable presence in the placid little town where nothing happens – until it does.

The movie takes risks that come from major ideas crammed into a minor budget. Director Patterson has some stunning long takes and camera tracking shots that look quite in place for a huge Hollywood movie. He uses a slow fade to black a few times when Billy is telling his story on the radio. It makes you concentrate and form your own mental images of what type of secret operation went on in that desert many years ago. Plus the whole movie is presented as a fictional episode of a black and white science fiction show called “Paradox Theater”.

The minor budget and independent nature of the movie does not detract. Instead it makes more intimate and personal – and it brings you along for a helluva ride

The Vast of Night

@peepso_user_48180(MovieReviewMom) Those long camera takes were amazing. Such a quirky, fun movie.