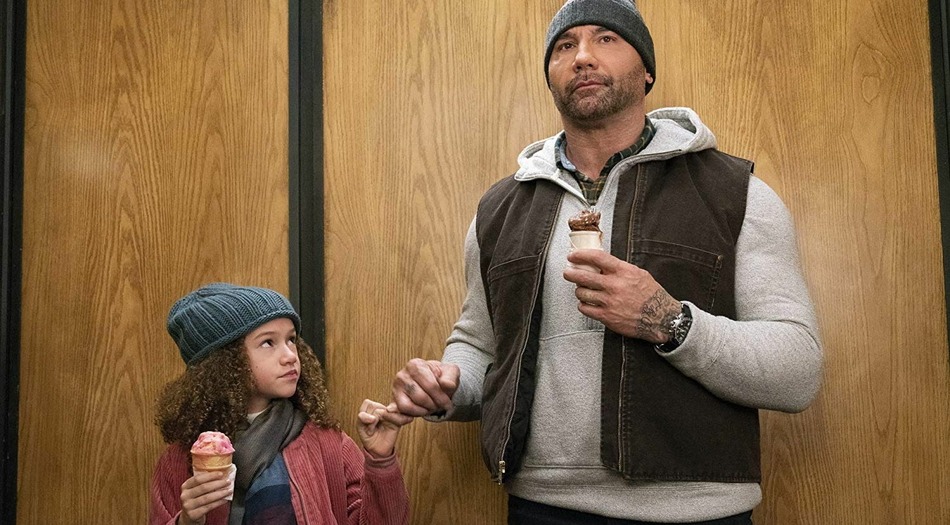 My Spy was supposed to be released months ago, but because of Covid-19, I think this being in the middle of summer instead, is a better choice. Your whole family is around right now, and everyone’s ready for a feel-good story with a laugh. The same old stuff isn’t cutting it at the moment, so here comes STX Entertainment and Amazon, who couldn’t have chosen a better cast to deliver that very story. Dave Bautista (Guardians of the Galaxy, Stuber) and Chloe Coleman (Big Little Lies) form the perfect team, making it easy to believe that he’s the ideal unsuspecting adult who would bend to her keen and perceptive charms.

The storyline itself isn’t anything new. That said, the chemistry between Bautista and Coleman is undeniable and, therefore, worth watching no matter how familiar the formula, even one that’s as cuss word laden as this. I guess that’s what won the movie, its PG-13 rating.

Bautista plays JJ, a CIA operative, who we meet during a job that doesn’t quite go down as it’s supposed to. In fact, it goes so bad that his boss, who still needs to complete the assignment, puts JJ on surveillance duty rather than on the mission.  JJ feels slighted, of course. Instead of being in the action, he’s now charged with ‘babysitting the civilians’ that the man who he was supposed to takedown in the first scene, will be coming after.

He prefers to be alone, but with this job, he’ll be working with Bobbi (Kristen Schaal), who fan-girls at the idea because she admires him so much. She starts asking JJ if he’ll teach her some of what he knows so she can move up in the ranks at work. JJ isn’t too fond of anyone, let alone her, or the idea of getting stuck with her. In his own impersonal and detached style, he’ll try to make the best of it.

The two get an apartment in the building of the targets, Kate (Parisa Fitz-Henley) and her daughter Sophie (Chloe Coleman), and set up shop. JJ puts cameras all around Kate’s apartment, and they start monitoring them. Almost immediately, Sophie finds one of the cameras. The astute nine-year-old knows that such equipment would act as a beacon, so she gets to work quickly. Due to knowing her way around the internet, Chloe tracks down from where the signal is emanating. Almost immediately, and bravely for a youngster, she walks in on them as they’re going through tapes of her and her mother. She starts recording them on her phone and is very direct in her line of questioning. This is a great scene, watching them squirm when they realize a child has had them.

Having just moved to the area, Sophie doesn’t have any friends, so she sees an opportunity and goes for it. She blackmails them into filling that gap, even seeing JJ as a suitable father figure. This dynamic works very well as the script actually has her dragging him to her school to show him off to the cool kids who won’t have anything to do with her. Quite hilariously, she continues to use him, taking full advantage of the power at her fingertips. Predictably, he not only forms a relationship with the girl but with her mother. Things like this are yawn-worthy, but overall, this is an entertaining, well written, aptly edited, and genuinely satisfying movie. We get to witness a loner grow while watching everlasting friendships flower. Outside of the profanity and some of the violence, ‘My Spy’ is the perfect family movie. Don’t listen to any harsh criticism if you hear any. Enjoy!