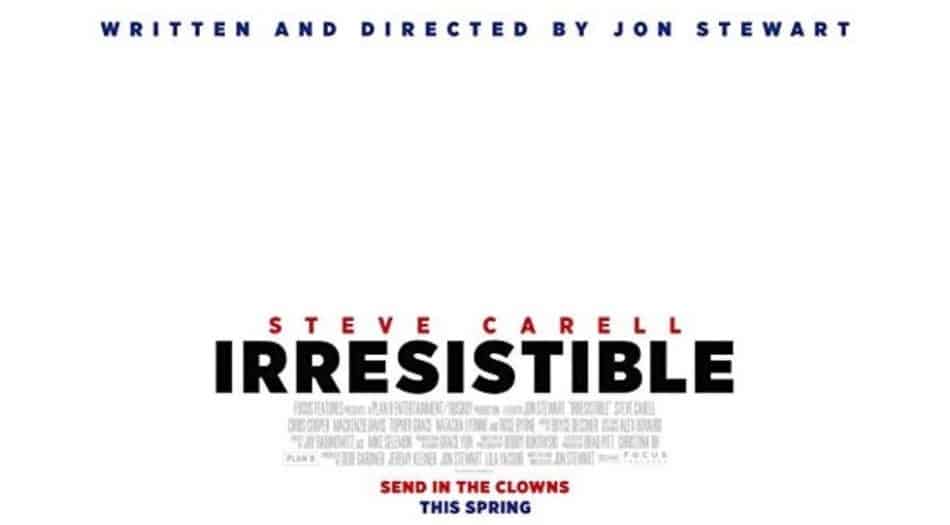 “Irresistible” – Available for screening (to rent or buy) on June 26th

“Irresistible” is the second movie that has been written and directed by Jon Stewart. Stewart is well-known for being a cable channel comedian and political commentator. He had a great run on the Comedy Channel, being one of most talked-about talents in the business.

His first movie “Rosewater” was very political, and touched on a sensitive subject of a political prisoner in Iran. So for this movie “Irresistible”, he has made his topics much closer to home, here in the United States. This time, it is a small town in the Heartland of the country – rural Wisconsin.

Due to an unfortunate situation, I was not able to watch the screening made available. This is a mistake on my part, not anything done wrong by the studio or the promotional representatives. Rather than creating a post with a full-fledged review, I will gather as much information about the movie and present it here. With that, the movie can get the wide-spread knowledge that the audience will need to know about this movie and to find out how to view it. It will be available for screening (to rent or buy) on June 26th.

A Democratic political strategist works the campaign for a retired veteran’s bid for mayor of a small right-wing Wisconsin town. After the Democratic National Committee’s top strategist Gary (Steve Carell) sees a video of a retired Marine colonel (Chris Cooper) standing up for the rights of his town’s undocumented workers, Gary believes he has found the key to winning back the Heartland. However, the Republican National Committee counters him by sending in his brilliant nemesis Faith (Rose Byrne) and a local race quickly becomes a fight for the soul of America.

Jon Stewart takes the approach that a small rural town will become the microcosm of the Country-wide political power struggle between Democrats and Republicans.  The small rural town will play out all the political divisions of the Left vs. Right and the Conservative vs. Liberal. The mindset of the Coast Elite Class (East Coast D.C and New York, West Coast San Francisco and Los Angeles) will do battle in the “Fly-Over Country”. This is the kind of thing that Stewart should excel in creating. The whole false front of major political Party logic falls apart when questioned by the local ‘hicks’ and ‘rednecks’. So will this movie succeed in getting the grain of truth that is in every political election?

Stewart has collected a ton of fantastic talent in this movie. Steve Carell, Chris Cooper, Mackenzie Davis, Rose Byrne (among some others) are the lead players in the comedic look at the small town election pulled into a major nationwide spotlight. The people involved are very capable of making a great script sizzle, and can even a good script become a tasty meal. The premise is fun, because it can set it up for a equal-opportunity bashing of both Left-Wing and Right-Wing ideas. However, just because the chance is there to create some biting satire, will the movie go ahead and take a bite? Jon Stewart has the reputation of being sharp-witted master of Satire. We will see if that can carry through into the movie.

Once the movie does become generally available (starting June 26th), I am going to make it point to try and see this movie and create a full review for “Irresistible”.

“Irresistible” – Available for screening (to rent or buy) on June 26th