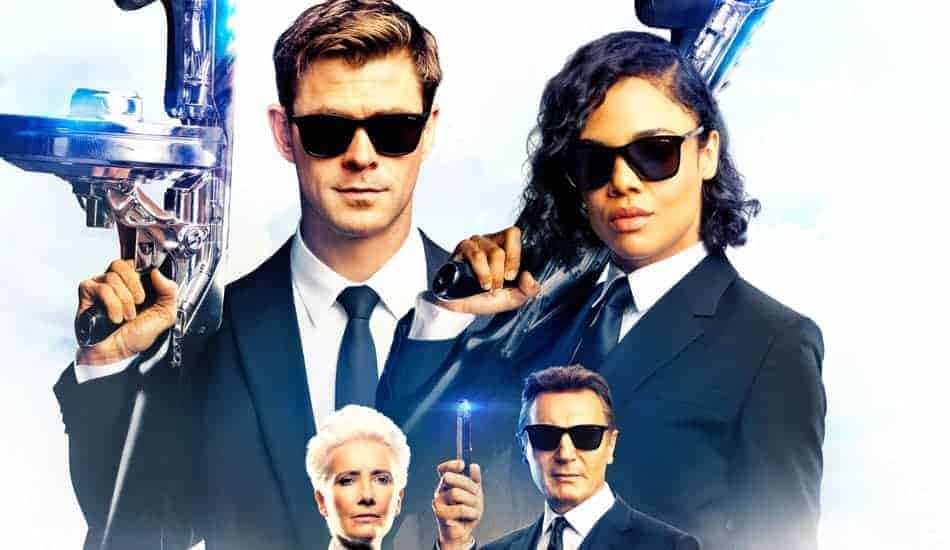 “Men In Black: International” demonstrates that the whole world still needs to be saved from some truly awful aliens. But MIB is no longer only in America, eh – mostly in New York City – but now in London, Paris and other exotic locations. The New York agents K and J are gone now. Perhaps they have taken a vacation to Uranus. But in any case, there are still threats to the world. And there is a band of Men (and Women) in Black to keep the peace. Not to mention all the De-Neuralyzer action to start flashing and make all the bystanders forget anything they saw of the action…

Molly (Tessa Thompson) is a young kid who lives and breathes science and outer space. When an alien makes it to her house one day, she befriends the little guy and helps him escape. The Men in Black visit the house and De-Neuralyze her parents to make them forget, but they did not get Molly. She grows up and finally locates the NYC branch of the MIB offices. She invites herself into the building, and is caught by the new Chief, Agent O (Emma Thompson). She gets put into probationary status as a junior Agent. She is now going to be Agent M, and she gets sent to the London branch to help out over there. She meets the leader in London, named (appropriately) High T (Liam Neeson).

The London office is in a bit of a shambles. There might a mole in the office, and some people are not trusting anyone else. Agent C (Rafe Spall) thinks there is something fishy with the most famous one, Agent H (Chris Hemsworth). Agent H and High T once saved the world in Paris a few years ago, and he will not let anyone forget. Agent H decides to team up with the new Agent M and show her how it done. The first assignment is an easy one – protect a royal alien dignitary show him a good time. However, when a couple of shape-shifting aliens attack and try to kill the visiting alien – the royal visitor gives Agent M a special keepsake before he dies. Then shift to Marrakesh, where some shady arms dealers have been attempting to get banned alien weapons to sell on the Black Market. Agent H and Agent M find that his contacts have been killed.

They also locate a strange small alien race that lives life on a chessboard. All the other little alien guys have been murdered, and only a single pawn remains. Agent M names him Pawny (Kumail Nanjiani), and he swears allegiance to Agent M forever. Agent H and Agent M (and Pawny) are chased by other MIB Agents, but they escape. Agent M determines that the ‘special keepsake’ was a secret weapon with the power of a supernova. It could destroy the whole planet if, it fell into the wrong hands. The all decide to go and visit Agent H’s old girlfriend in Naples. She is a three-armed alien named Riza (Rebecca Ferguson), and she could be after the supernova weapon. But Riza has a mean alien bodyguard who is ready to kill Agent M, until she remembers that he is the grown-up version of the cute little alien from her childhood. Awwwww!

When all seems lost, High T comes with reinforcements and saves the day. The shape-shifting aliens are destroyed, and the supernova weapon is secured back at London HQ. The MIB world can now rest in peace. Or is it going to be – RIP? If there is a high-ranking mole, then the special weapon is in danger, and so is the rest of the Earth. Agent C now understands that Agent H is not the bad guy, so it must be someone else. But can they get to the Paris location where the earlier battle occurred? The world is under attack and again, and the only group who can save it are the Men (and Women!) in Black. Just like AC/DC might say, “I’m Back in Black”!

This version of the MIB is very good, even without the original pair of Agents (Tommy Lee Jones and Will Smith). Getting it to open up overseas where even more insane action can happen is a good thing. Chris Hemsworth and Tessa Thompson have a really finely-honed ability to do comedy. The story can sometimes drag in places, but it gets a few great lines and some nice touches here and there. A good voice acting job is done by Kumail Nanjiani as the cute little Pawny. It would have been nice to have a little bigger role for Emma Thompson, because her part was little more than a cameo. And of course, Liam Neeson could never be the bad guy, right?

“Men In Black: International” does what it can to pick up after the prior three MIB movies. If this one can generate some sparks, then maybe we can eventually see a sequel crossover event, an MIB movie directed by Christopher Nolan — “”Men In Black: Interstellar”…