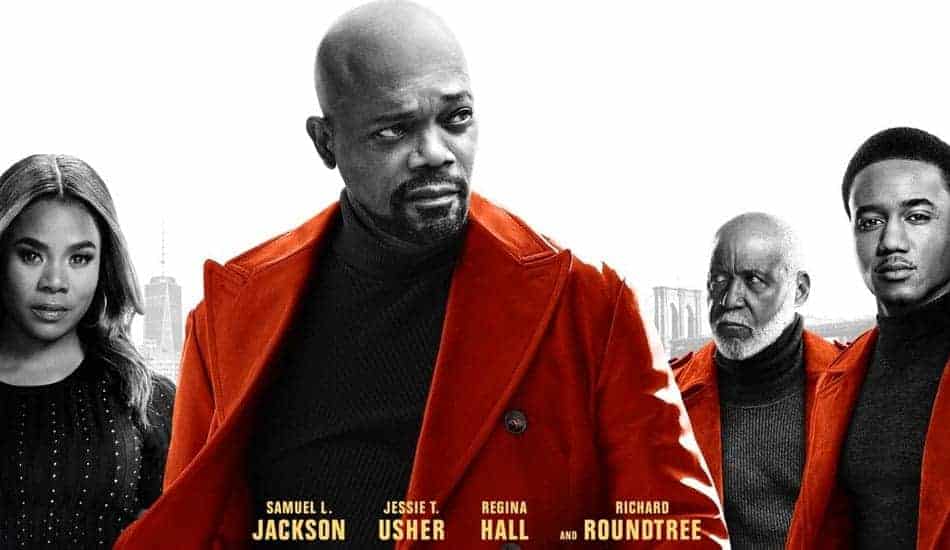 “Shaft” is the current 2019 version of the continuing story of John Shaft that was started in 1971. “He’s a complicated man – But no one understands him but his woman” – you know, the theme song by Isaac Hayes. Well then, “Shaft” later appeared in 2000, when Samuel L. Jackson took over the main role from Richard Roundtree. Now, with this movie, there is trifecta of “Shaft”. This new version has Jessie Usher playing a newest generation of “the cat that won’t cop out, when there’s danger all about”. Can ya dig it? You’re damn right!

JJ Shaft (Jessie Usher) was raised by his mother Maya (Regina Hall) because she was afraid of the violence that followed her husband, John Shaft (Samuel L. Jackson). JJ grew up not knowing that his father was a fearless private detective in Harlem. He had a major bad attitude that matched his bad-ass skills. JJ is much meeker and more gentrified, being raised by his Mom. But law enforcement was in his blood. He became an FBI Agent, well – actually – he is a Computer Data Analyst. JJ is far from the guns and violence and the street thugs, or so he thinks. A friend of his is found dead of an overdose. But his childhood friend Sasha (Alexandra Shipp), who is now a nurse, knows that he was killed, and it was made to look like an OD.

JJ Shaft takes time from his FBI duties to go and find his father, John Shaft. Shaft has not seen JJ in close to 20 years, and he wonders why the kid seems like a wimp. John Shaft has no filter and says whatever the F*** that he wants. So, there is a little bit of stress between the two of them. Since the death of JJ’s friend also ties back to a drug kingpin, John Shaft is very interested to find out more. JJ and John go and start checking into some seedy places to find out things that some very scary people want to keep private. Sasha is not amused with the blunt attitude of Mr. Shaft (senior). But she also finds some clues that lead the detectives onto the right trail. Maya has also come back into New York City for a date, but she does not know that JJ is working with John Shaft.

There are some assassins that are out to kill John Shaft and in son JJ. They attack them in different places, where JJ is with Sasha and wher John is around Maya. They both get the best of both of teams of thugs, sent by a mysterious source. Later JJ and Sasha go to explore a warehouse that they think is a link to drug smuggling. Sasha gets abducted and taken as a hostage, and JJ goes to his dad for help. John Shaft knows that he could also use some assistance. So, he goes and gets another person to help them – the original John Shaft (Richard Roundtree). He is the uncle (or father?) of the current John Shaft, and he knows New York City and Harlem scene since, when – going back at least to 1971…

“Shaft” is a politically-incorrect, trigger-rich environment of crazy laughs and misadventures. It is not for the faint-of-heart or for people who could be easily offended. If that might describe you, then “yo’ better keep yo’ ass away!” (as John Shaft might say). It is designed to teeter over into crude language, violent behavior and irreverant humor. This movie is that much better for doing that, and pulling no punches. It skids out of the boundries of ‘polite company’ into a uproarious down-n-dirty gutter crawl through the funniest adventure ever found in Harlem. Samuel L. Jackson is given full reign to go off the rails in his portrayal of John Shaft. He rides that role hard and puts it away wet. With top-notch help from Regina Hall, Jessie Usher and Alexandra Shipp – the movie is a full-tilt boogie blast of fun. Then, bring on the original Shaft – Richard Roundtree – at the end, and it’ll blow the roof off the joint.

“Shaft” uses the Hard-R rated power of Samuel L. Jackson to deliver one wild Harlem ride. “You see this cat Shaft is a bad mother. Shut your Mouth !”