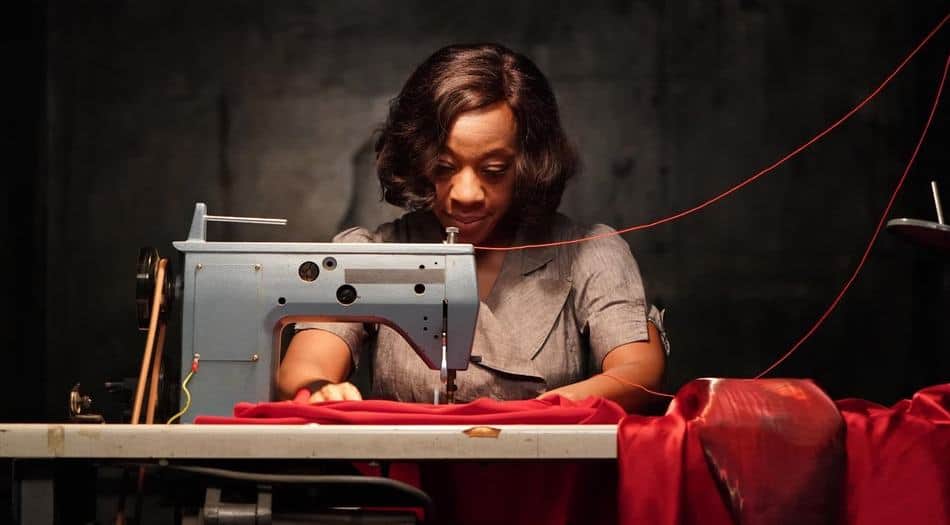 “In Fabric” is a One Size Fits All disaster. This movie is supposed to be a ghost story. However, it’s a ghost story that doesn’t let you fully enjoy yourself. It’s the films fault, honestly. It could have been so much more and you could have really gotten into it, but every time you start to fully invest yourself into the story-line, it takes you down another rung on a macabre, ghastly, in fact, quite horrendous staircase from which you can never fully ascend. Sounds like a good thing? I thought it would be, especially from its intriguing trailer and with how the film begins, but it doesn’t quite work out that way.

The film is set in a department store during its busy season. In fact, one scene will have you swear you were reliving your first ‘Black Friday’ experience. The story centers around a fascinating and alluring red dress that consumes the person who last wore it… literally and figuratively.

We see the dress move from shopper to shopper, in this case, victim to victim, by way of the bustling shop. Once it ensnares the person who loved and admired it, the purchaser is to, from what I can tell, love only it. You can’t even wash it. To wash it means that you would have thought it imperfect enough at some point as to need to wash its natural aroma away… and possibly damage it’s flawless fabric. How dare you even suggest such a thing! Yes. I am implying the frock has thought.

The first owner of the garment, Shelia (Marianne Jean-Baptiste) is a great character! She needed to be in the whole film. Had we continued to focus on her story and her handling of the dress, I would have liked the film more.
I’m getting ahead of myself.
Shelia is down on her luck. She’s looking for love and is unfortunately talked into purchasing something she doesn’t need or feel remotely comfortable in. The dress. It isn’t her. Soon, she’s marked by the gown; has a strange red sore on her chest. She waves it off as a rash. Not long after, she is trying everything she can to rid herself of the unholy threads. Shelia has become acutely aware there’s something wrong with the thing. Sadly, she doesn’t quite know what she’s dealing with.

Billed as a comedy/horror, I was expecting the laughs. They didn’t come. Figuring it must be leaning heavily toward the scary side of things, I assumed it would get bloody and outside of what was an unexpected and unforgettable scene, I got zip. However, the movie was filled with a lot of incredibly wordy dialogue that was, at times, fun to decipher. But that doesn’t make it a comedy. It made the experience feel more like a lecture you were forced to sit through, honestly.

To which I say this, if the entire middle third of this piece were taken out and thrown into the washing machine that the dress was in such opposition of, and then reinserted with more Shelia and some structure, this could be a decent art-house picture.
As it is, the script is too long and overall, the message is pretty well lost.
If nothing else, the movie is an exercise into how a good cinematographer can take advantage of a flowing dress and a fan to reveal how the two together, coupled with some marginally well placed lighting and synth music, works well to be, at least subliminally, an intense transition shot.

Let “In Fabric” be a lesson to us all. Watch your greed, envy or whatever sin you might be committing because it just may lead to hell… which is where you are as you watch this film. So, after venturing into screening this forgettable flick, ask yourself this, (only after will my point make any sense), which sin did you commit to land YOU in front of the screen?