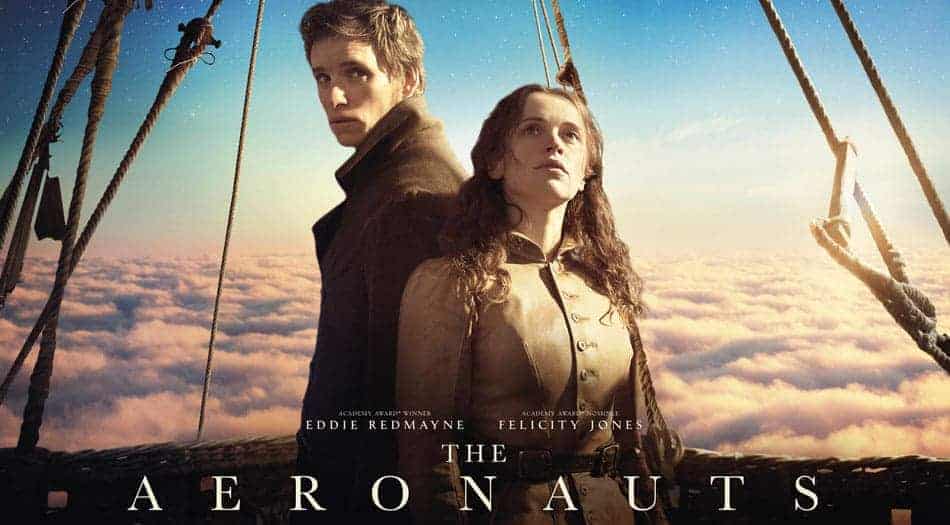 This stimulating story brings the stars of ‘The Theory of Everything,’ Felicity Jones and Eddie Redmayne, back together… and their chemistry still works. This film is electrifying, exhilarating and uncommonly, unexpectedly, hair-raising!
‘The Aeronauts’ script is written and directed by Tom Harper (Wild Rose) and co-written by Jack Thorne, yet it’s based on a composite of flights that are detailed in a 2013 book by Richard Holmes’ called, ‘Falling Upwards: How We Took to the Air.’ Harper takes the story of James Glaisher’s record-setting turn as a meteorologist on a voyage of discovery, and delivers a stunning visual ride that can be enjoyed by the entire family. Is it a masterpiece? No. But, it’s breathtakingly thrilling and for an hour and forty minutes, you can get away and fly into the heavens for awhile. So why not take that ride?

Well, I say see this but the nay-saying has something to do with, not miscasting, but missing characters. The book is a somewhat true account of the most important and compelling balloon flights ever for a reason.
The event happened on September 5th of 1862. Two British aeronauts, named James Glaisher and Henry Coxwell, took to the skies in a coal gas filled balloon and broke the world flight record for altitude, rising to about 38,999 feet! Quite an accomplishment, right?!
But here’s where critics of the film come into play. Redmayne (The Danish Girl) plays James Glaisher but the movie has no Henry Coxwell. Strange. He has been discharged and in his place is a woman named Amelia Wren, played by Felicity Jones (Rogue One: A Star Wars Story). Wren is a completely fictional character. that’s a puzzle.

Anyway, Amelia is a wild, sassy, mischievous and playful woman, but also a knowledgeable and very much needed balloon pilot. When we first meet her, she’s doing everything she can to entertain the crowd that’s there to witness the balloon take off.
If you know nothing of the story, you can’t quite figure out how she’s paired with the serious scientist or how that dynamic will work, but you trust Harper, nonetheless. Almost immediately we’re in the air. Very little is known about the weather in 1862. Glaisher believes the skies hold many answers and wants to fly higher than anyone ever has in order to learn what secrets the clouds are keeping to themselves.

One thing he learns, but that Amelia has warned him of, is that the human body has limits, no matter how much James wishes that weren’t true. Once he’s in the balloon, he has only his objective in mind, which she believes is to not appear a failure to his colleagues. What Amelia wants most to do is, ‘reach the moon and bring back stardust.’ What they ultimately do together, and learn from their experience, is determine that the atmosphere has layers.
How all of this plays out is quite captivating. This scientist’s objective is to be able to predict the weather to save lives, stop famine and prepare for droughts. He needs her help to prove theories. She needs his, as well, to move on from the great loss of her last hop. She conceives of nothing better than to fly to find happiness and wishes to be happy again. However, it’s what she lost that brought her contentment, not necessarily the wild blue yonder.

The climax of the film is outstanding. You’ll feel for the characters and hope for their survival. Amelia gives a lesson on how it’s almost scientifically impossible for them to, weather this storm, so to speak, which makes the movie that much more of a nail-biter! The woman is on the outside of the balloon, in below freezing temperatures, performing impractical stunts as she climbs to the top of their inflated vehicle. I was wiggling in my seat all over the place as her resolve carries her through a task that heretofore have only been performed by the likes of John McClane!
What these two… no… what the real people did, led to the first scientific weather forecasts. They changed the world. Perhaps it wasn’t the best idea for Tom Harper to change Coxwell to a made-up character… but it made for a very entertaining film to go see on the big screen this weekend. And hey… if you had never heard of Coxwell before, now you have.