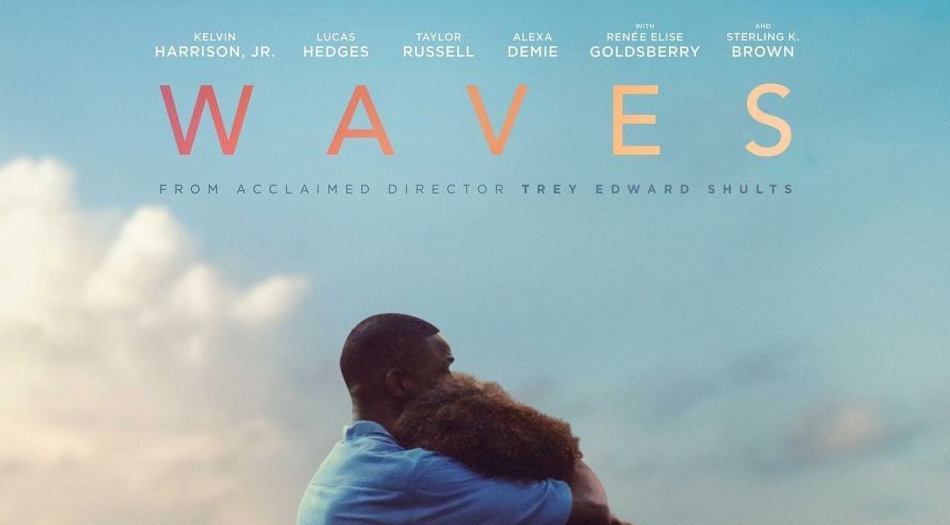 Waves” is a movie that is broken – not in the way that you might think. It is broken into two different pieces, with a different focus for each part. It follows the same middle-income Black family who live on the outskirts of Miami, in Hollywood. But it is not the Tinsel-Town version, it is a normal town in an attractive place that is near a major city. The good life in the ‘burbs may not be a hard-knock life as some people have it in the inner-city. But there can still be demons, and angels, in the shadow of the City.

Tyler Williams (Kelvin Harrison Jr.) is a senior at high school, and a wrestling star. His strict and regimented father Ronald (Sterling K. Brown) pushes it into Tyler that being average is not enough, and that being himself is suicide. He must always push through to be the best in everything. Even if he must push through the pain, the pain of a shoulder tear that could end his wrestling time completely. Tyler will not mention that to Ronald, or to his step-mother Catherine (Renée Elise Goldsberry). Tyler will never tell his younger sister Emily (Taylor Russell), who also attends the same high school. Again, Tyler keeps these things to himself, and he will not say anything to his lovely girlfriend Alexis (Alexa Demie). Tyler is, of course, a Big Man On Campus – and the world revolves around him.

But a bad move in a wrestling match shuts Tyler down physically. He has damaged his shoulder beyond repair this time, and there is no getting back into shape. His girlfriend also has some news about her new discovery – she is pregnant. Tyler takes Alexis to a clinic to ‘handle the problem’. But Alexis decides that would not be her choice in the matter. She has major fight with Tyler, and they break up. Tyler continues on a downward track, by drinking too much, and by getting high, and by stealing his father’s pain medications. There is a prom night coming up, and Tyler sees that Alexis is going with some other guy. He goes to a house where there is a prom party – words are exchanged – and a tragic event occurs. Tyler is scared and he is at wit’s end. He does something terrible, and there is no going back…

But there is another story to tell, and Tyler’s sister Emily is the one to take center-stage. She and her parents are deeply affected by what happened. Her parents are on the verge of breaking up over it. Emily has very little to hold on to as the waters rise, and the emotional waves crash all around her. But a fellow student makes awkward small talk, and finally asks to meet her for lunch. Luke (Lucas Hedges) and Emily talk for a while, and Emily sees that Luke has some very fine qualities. He is concerned for Emily’s well-being, and that is a good start. He also has a somewhat rough home life, because his father ditched out when he was young. But now she hears that Luke’s father is near death, a few states away.

She presses Luke to do the right thing, and they go on a road trip to visit his father for one last visit. Luke has not seen his dad in forever, and he was holding a very big grudge against him. But now seeing that he was sick and basically helpless – Luke and Emily do all they can to make his father’s final day less burdensome. Having some people around him was giving his father hope that his live was not wasted. Emily knows that Luke would have never forgiven himself, if he had not made this trip to see his dad one last time. Emily also knows that she and her father can reconcile at some point. She had felt so angry about what happened to Tyler. She wants to make sure that they know in her family — all of them can choose a path of forgiveness and love, rather than to cling to the ugliness of the past.

“Waves” packs an emotional wallop in the story structure of two sides of the same family. The first part, featuring Tyler’s story, is pulsing and racing around with loud rap music and strained relationships. The second half, the point where Emily’s story takes over – this part is much more subdued and quieter. The story line is fractured, because it reflects the family life – also fractured. The acting is personal and emotionally raw. Kelvin Harrison Jr. (Tyler) is excellent, as in Taylor Russell (Emily). Sterling K. Brown (Ronald) also has a commanding presence, and Lucas Hedges (Luke) puts in a good turn as an emotionally stable boyfriend to Emily.

“Waves” unusual story development is similar to a movie from 2013 called “The Place Beyond the Pines”. It also had two-part type setup, and the first part of that story led directly into the other half of the story. Other than that, this is a unique type of writing. This might not be everybody’s cup of tea – but there are a lot of emotions brewing in this movie.