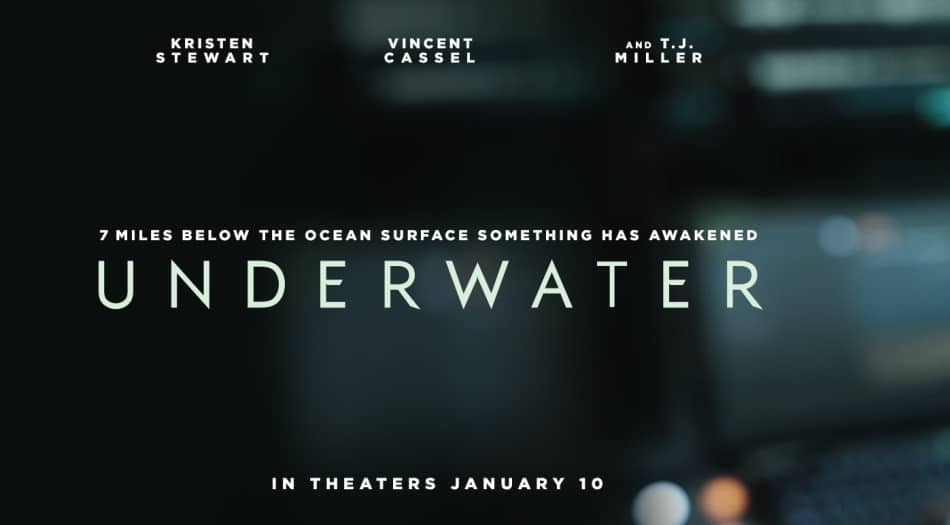 “Underwater” is a science-fiction based movie that veers into horror, and it takes a tense route to get there. No matter that the overall premise is bit unrealistic. The idea is that near-future oil drilling can be done at the bottom of the ocean, and at the deepest depths of the Marianas Trench. But once the minimal settings are in place, the movie takes off like an overloaded freight train barreling down a mountain straight-away. This movie grabs you and puts you into the middle of a Deep Blue Disaster. And that is just in the first five minutes…

Many workers live in the massive structure that is almost seven miles under the ocean. One of them is Norah Price (Kristen Stewart), who is an engineer. Before her day gets started and she can finish brushing her teeth, all hell breaks loose. A massive shift in the tectonic plates causes an earthquake. The tremors make it to the oil rig structure, and everything shakes loose. Power goes out, computers shut down and the living quarters start to crack under the 8000 pounds per square inch of water pressure. Norah, still in bare feet runs to find an escape route. She meets up with Rodrigo (Mamoudou Athie). They are able to find some others – and all are in jeopardy. They first come across Paul (T.J. Miller), and they get him out of the rubble.

Norah and Rodrigo are joined by Captian Lucian (Vincent Cassel), and also navigator Liam Smith (John Gallagher Jr.). There is another person, a research assistant named Emily Haversham (Jessica Henwick). All they know is that they will die if they stay there. It might be possible to use heavy deep-water suits to walk across the bottom of the ocean to get to a different drilling platform. And that is the BEST idea that thye come up with. There are enough suits, which are bulky and hard to work with. But at least the glass helmet pieces are all in perfect condition, right Rodrigo?

The smaller group goes on to find other odd assorted things, such as a baby deep ocean creature that is of course, not an Alien. Perhaps they could call it a Hydromorph? They are band of small humans in big, bulky suits have some unwelcome local guests. These previously unknown creatures that have been released by the earthquake are following these guys. They are trying to decide if these skinny packages of lean meat in a mechanical suit should become dinner. So they all play a little ocean floor game of catfish and mouse.

Along the way, there are a couple of members of this spunky group of survivors who leave that group (i.e. they don’t survive). Each step of the way has danger written on it, and each new tremor can cause more damage. They are being stalked by some things that they do not understand. They have time to ponder what caused all of this mayhem. But soon enough, new problems arise and new deadly forces intervene. Everyone is almost completely out of air, and they are no closer to finding the other drilling station. Even if they can find it, will there be any escape pods left that will work?  And when the chips are really down, will there be someone who will make a sacrifice to see that others get home safely?

“Underwater” is a movie that you almost want to imagine can only be a stinker. It has a weird premise, it comes out in January, and it has little publicity. But when you watch it, you get placed into a side-by-side position with the people in peril. The tension is effective, and you want to root for these guys to make out of there. The overall reason of why this situation in the movie came about becomes unimportant. Now you want to see if anyone can make it through the gauntlet of deadly sea monkeys at the bottom of the deepest part of the ocean.

There is little in the way of character development, and the there is not much of any back-story or any explanations for things. All the acting is mostly done with large bulky suits and with glass fishbowls on their heads. But they all get the point across. They are NOT in ‘a pineapple under the sea’, and they are NOT traipsing around on Bikini Bottom.  The story does not need to get into details, because the action always moving forward.

Perhaps audiences will take the plunge to sea – I mean ‘see’ — “Underwater”, and they will decide the movie is not all wet…