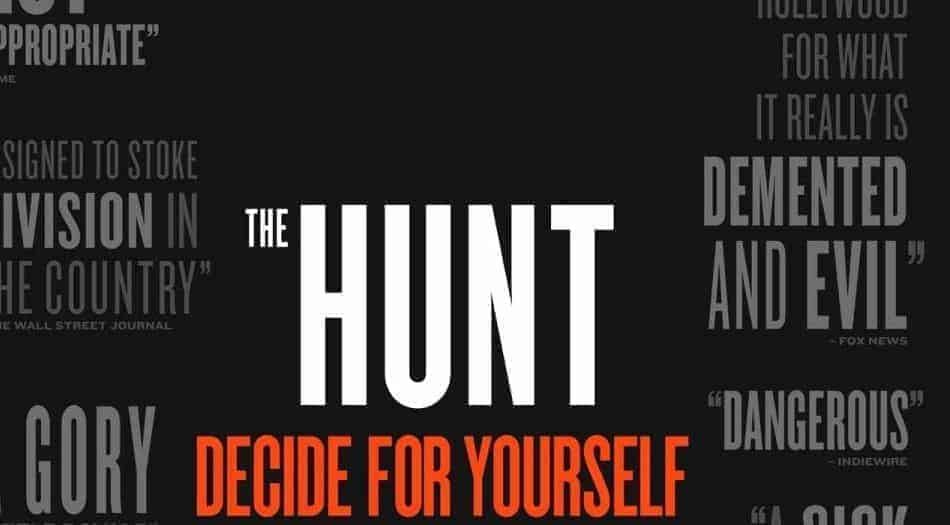 “The Hunt” is sure to get the ‘Radical Red State’ people and the ‘Blindly-Extreme Blue State’ folks all riled up. But for the rest of us, it will be a typical Action/Horror extravaganza. It takes the Black vs. White confrontation of “Get Out” and steers it into the Liberal vs. Conservative obstacle course.​

There is plenty of satire being poked at both sides of the political spectrum. Before you can say “Fake News” or start to worry about the “Climate Crisis”, “The Hunt” comes along to upset your apple cart. Based somewhat on an old short story “The Most Dangerous Game”, it proposes the most difficult thing to hunt are humans. But based on this version, the even more difficult thing is keeping your ‘huntees’ in check, especially when you mess up on who you select.

In the opening text message exposition (‘Text-position’?) there is revealed a group of Liberal Big Wigs who brag about ‘The Hunt’. This leads to a strange confrontation on a private jet, and in the shaded darkness a woman murders a very confused man. Then a diverse group of people wake up in a field somewhere, gagged and drugged. Once awake, they find keys to get out of the gags, and a large box. Some brave soul opens the box, afraid that it might be booby-trapped. Out trots a small pig, but there is also a huge cache of weapons. Everybody gets armed to the teeth, but then the murder and mayhem start. Most of the people in the field are picked off one by one. Lesser known stars get murdered first, of course. The rest of them run into the trees.

What is going on here? Why are people chasing them and killing them? Why, the biggest Good Old Boy in the bunch knows. It is the ‘Manor-gate Game’, or ‘The Hunt’. He read it on a Reddit thread, of course. Once a year, a big group of Liberal weenies gather up some ‘deplorables’ from all over ‘fly-over’ country. The good, God-fearing upstanding people must fight off the Atheist Monster Cult that started ‘The Hunt’. Then his head gets blown off. On to the next guy, I guess.

One guy, called Staten Island (Ike Barinholtz) helps others over a fence.  Three people get out onto a road and find a local county store, in Alabama (so they are told). But before too long, ‘The Hunters’ will need some new people to hunt. Then a different lady finds her way to that same store. Crystal (Betty Gilpin) is quiet and seems to be demure. But when she gets a little information out of the store owners, she turns lethal. She kills offs some Hunters and meets Gary (Ethan Suplee). She figures the best way out of there is on a train. But there are also illegal border crossers on that train, maybe? But then a military convoy stops the train.

Crystal is very, very cunning – and she determines that they are not even in America anymore. She and Gary meet up with another person who is being ‘Hunted’ named Don (Wayne Duvall). There is some major confusion and Gary gets away. But the American ambassador comes to take Don and Crystal back to safety. Or so he says, if he is who he says he is. But Crystal is way too smart – Don and she get away. And this time she knows where to go. She tells Don the story about the Tortoise and the Hare – but with her own little twist. They find a big group of ‘The Hunters’ on a high spot above the original field where they first woke up. But now it is time to give ‘The Hunters’ a taste of their own medicine.

Before long, Crystal is ready to take on the Liberal Leader – the Big Kahuna – The Big Brie Cheese. Athena (Hilary Swank) is ready for a one-on-one fight with the only other survivor. They both get a chance to explain a little bit of why this is all crashing down the way it is. Athena, and the other ‘Hunters’, were all destroyed in careers and in wealth – because of the Redneck Hicks who posted about them on Social Media. To settle the score, they ‘invited’ everyone to be together in the big field for a nice little bloodbath. But Crystal has her own story, and then the two of them mix it up in the kitchen. It is best Kitchen Fight since “Kill Bill Vol. 1”.

“The Hunt” was mired in controversy from the time it was first announced. Due to some actual mass shootings in the late summer of 2019, the studio pushed the release out until Mid-March 2020. There were some negative things said about the movie, even before anybody got a chance to see it. For the studio – that was free publicity that could not be bought! They just rolled with it, and will release it now. The studio, Blumhouse, does quite a few movies where the cost is minimal, and the return in Box Office is fabulous.

So, is this a good movie? The movie does a lot of things to skewer the Left and the Right, and it does it equally. It is violent and nasty, but the concept is so over-the-top that is winds up being fun – like a guilty pleasure. Betty Gilpin just rules this movie. She is smart and deadly, and full of fast-thinking action. She turns into a Jason Bourne type survivor. Hilary Swank is also pretty good, but her time in the movie is limited.

So, stash away all your Second Amendment guaranteed weapons – or hide your ACLU lifetime membership card – and meet your Red-State and Blue-State neighbors for “The Hunt”.