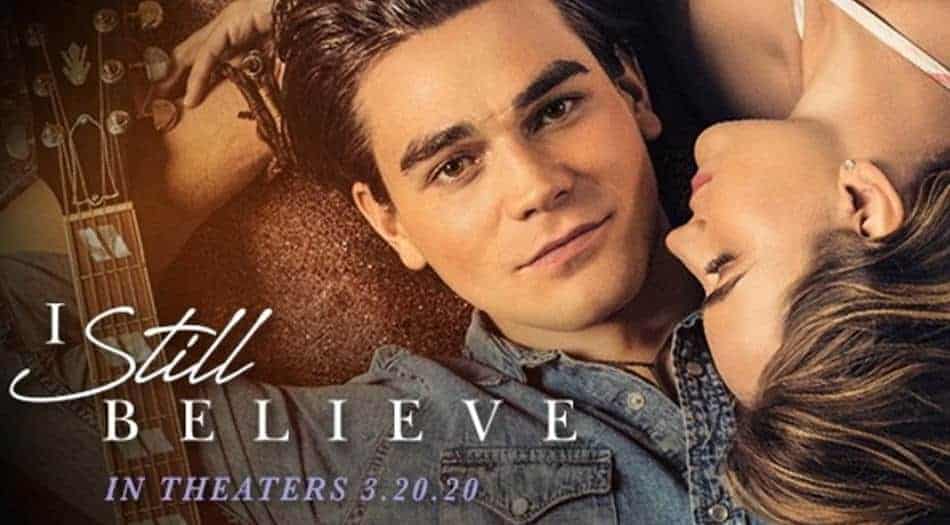 “I Still Believe” is a Christian themed story about a current Christian music star – Jeremy Camp – and the difficult journey he had with his wife, Melissa. Since this person is still around, the creators had Camp’s feedback and even his blessing on the way they tell his story. The story begins with him, but it ultimately gets back to his wife. She was stricken with a terrible physical burden and saw that it was lifted for a short time. Melissa then became ill once more, but her love and inspiration outlived her short experience on Earth.

Jeremy Camp (KJ Apa) was an Indiana high school graduate about to leave for California for collage. He has two younger brothers, one whom is disabled and teaches Jeremy all about love and acceptance. His mother Terry (Shania Twain) and his father Tom (Gary Sinise) are hard-working solid Midwesterners. They know that sending Jeremy to a far-off Christian college next to the ocean is dream come true. Jeremy has a little bit of songwriting and singing talent, which he got from his parents. Jeremy is very happy to be on campus where he can get his own faith-based music off the ground. He meet Jean-Luc (Nathan Parsons) who is a similar sing-songwriter – somebody who has made a break into the business…

But better than just Jean-Luc, Jeremy meets Melissa (Britt Robertson)- and he is immediately smitten and in love. Melissa is also close to Jean-Luc, so she does not want to make any commitments to Camp. She doesn’t want either of them to feel bad if she did not love only them. She is conflicted, and she turns to her sister – Heather (Melissa Roxburgh) – for guidance. But Jeremy is more persistent, and he wins her over. Jean-Luc is (of course) disappointed. But he sees that Jeremy has a true love for Melissa, and she does also for Jeremy.

Jeremy is away back home on break, and he gets a call about Melissa. She was admitted into the hospital. He drives straight back on his own to see her. Melissa had a tumor removed, the doctors have found cancer. She is scared, and Jeremy reassures her that God would be able to heal her. Jeremy starts to perform at more and more concerts, and he always has the crowd take time out to pray for Melissa. His parents were not sure that Jeremy should be attached to the girl who was so ill. But soon all the prayers are answered. Melissa undergoes a test – and she is cancer-free.

Jeremy and Melissa get married, and they plan a whole, new beautiful life together. But before the new life that they planned can even start – Melissa becomes sick again. Her cancer is back, and it is going nowhere this time. Jeremy and Melissa see the doctor to decide what can be done. Then Melissa takes a turn for the worse and the time has come for her. She now knows that if Jeremy tells her story, there might be more people who be given a reason to persevere – not no give up – to take up each as a gift and treat as the present (that it is). Melissa might not have a long live on Earth, but her devotion and the power of her love can still affect people into the future. Into a future where she will no longer be…

“I Still Believe” is a very good production about the popular singer and the trials that he and his wife endured. Yes, there is a bit of a formula to the whole movie, getting you emotionally involved in very typical ways. But KJ Apa (playing real-life Jeremy Camp) and Britt Robertson (playing his girlfriend/fiancée/wife Melissa) have a true honesty to how they portray these characters. There is a nice chemistry that exists between them. It takes the standard assembly of the scenes into the bigger picture – and gives the whole thing a believability that might not be there otherwise. These actors, along with Gary Sinse as Jeremy’s dad, take some average dialog and make into something better.

Sometimes when a movie is labeled “Christian-themes” or faith-based’ it can bring up thoughts of shoddy production values or wooden acting and script writing. This movie is not perfect, and it has more than a few awkward scenes and badly-written dialog. But there is an honest understanding that the pure heart of this movie is due to the love that Jeremy and Melissa will always share.