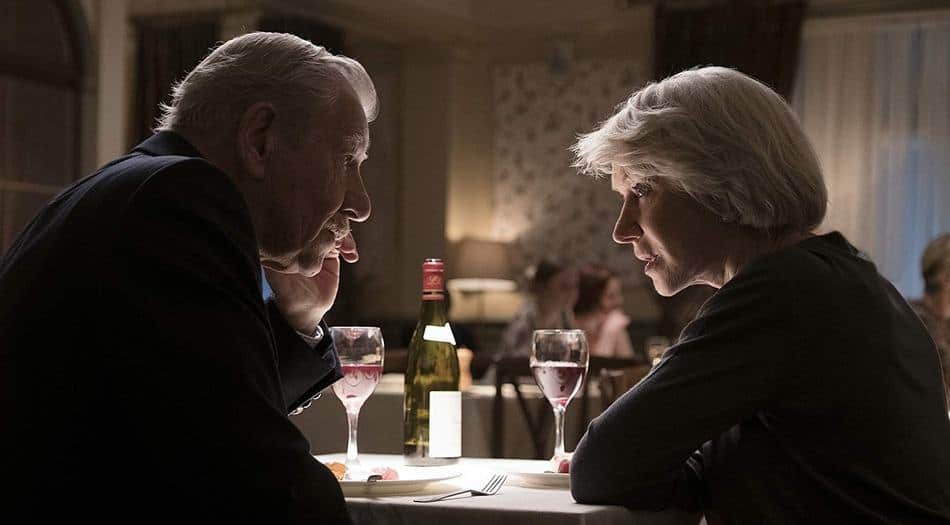 In ‘The Good Liar’ Ian McKellen plays a professional con artist named Roy Courtnay. We’re introduced to him when he’s innocently searching for romance on a dating site. He seems nice enough but there’s something about him that isn’t right.

The person he gets to know through the site is Betty McLeish (Mirren). The recently widowed Betty is looking for companionship and likes what she sees in Roy. After their first meeting, they agree to meet again. She opens up to him much quicker than he grandson, Steven (Tovey), is comfortable with. After injuring himself, she even insists Roy stay in her home. The two go to watch Tarantino’s ‘Inglorious Basterds’ which is an odd moment that will make more sense later in the film.

While the movie strolls on like this for a bit, dragging its feet in subplots to get to the main point, you know the destination will be worth the trip. The synopsis and trailer suggest as much. Since it’s slow at times, you’ll need to remember what you’re promised and stick with it. Your patience will pay off. And, if you don’t mind my saying, no matter how strongly you think you know what the ending of this movie will turn out to be, I assure you that you’re wrong.

The movie sidetracks to Roy’s life of crime, which is quite sinister. He’s cold, hard, and ruthless in his pursuit of as much money as he can get from his victims. He and his literal partner in crime, is Vincent, played by Jim Carter who has been in just about everything for the last forty years. Anyway, Roy is getting bored with Betty but once he finds out how much she’s worth, in the millions, his interest in her piques.

You can’t help but take an instant liking to Betty and knowing who Roy is, you hate knowing what he’s going to do to her. He and Vincent have a well-prepared confidence game they play on individuals and to keep you from guessing what’s really going on, you’re shown peeks into the grift and the consequences of people getting too close to them.

Director Bill Condon does a superb job of keeping your attention one direction, by also giving you only little morsels of back story and a few glances into who the main characters truly are. It’s at this time that the tension builds. Through the entire movie, as you would in any good thriller, you’ll keep guessing and wonder what’s going on. You’ll even be certain you know. It was fun listening to the audience gasp during particularly shocking revelations during our screening.

Though the stimulating script, score and cinematography work to regale and enthrall you, what works most to captivate, are the two leads. McKellen is horrifyingly malicious when not in the middle of a wire fraud con and you fear what he’s capable of. At the same time, while watching Mirren, conduct herself noticeably as sweet as syrup, you know there’s something more behind those eyes. Something else gives away that there’s more to Betty than meets the eye and that is that she’s sharp. The tell in the film is, how could such an intelligent woman allow herself to be bamboozled at all, let alone by this guy who’s evasive, has all the right answers and is oh so curious about her money? She wouldn’t be! So, maybe she does know who he is and how shady he is and wants to change him. Perhaps it’s a challenge she finds appealing. If she gets to know him well enough, can she turn him into a better man or is he beyond saving? I’ll let you discover what this movie is all about on your own. There’s much more to it than meets the eye. Keep yours peeled and see if you can see what everyone in my screening missed.