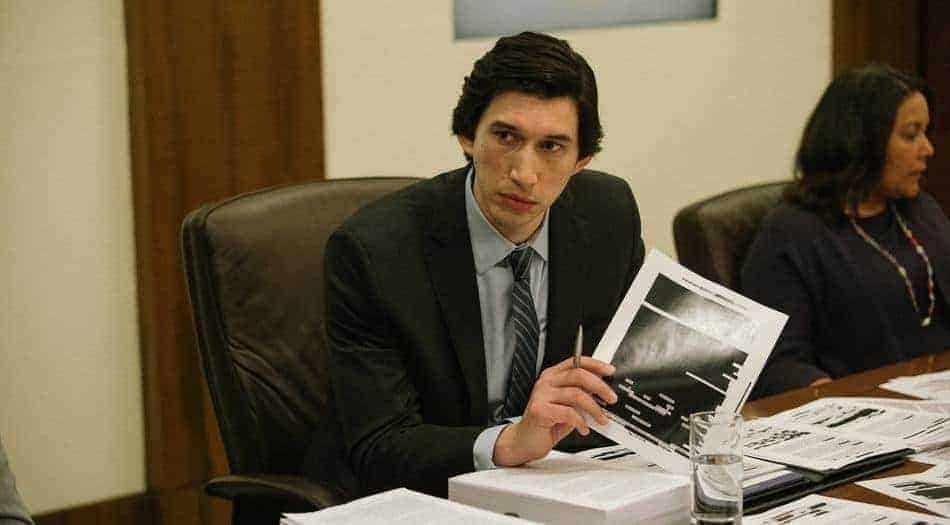 At this point in America, and for history’s sake, ‘The Report’ is essential watching. At the same time, because of the offensive attacks, it could receive, it would have been a difficult film to make.
‘The Report’ starts with showing Dan Jones (Driver) getting caught having stolen a document. Then the story is told in flashbacks about how and why Jones found himself in, for lack of a better word, trouble. As it turns out, it’s a good thing for us that he made the decision.

Writer/director Scott Burns takes us through several years of an investigation, based on actual events, that created the report the title points is mentioning. Senator Dianne Feinstein (Bening) asks Jones to be the leader of that investigation. He takes the job much more seriously than anyone was expecting him to, as he’s willing to journey where no one asked him to go to get the job done. The probe is to dig into the CIA’s program that had been created after the tragic events of 9/11, called Detention and Interrogation Program.

Since Feinstein is determined to do her job for the American people, in that she must provide oversight into the executive branch, Jones is savage in hunting the truth. He’s doing his best for her and ultimately for us, but at every turn, he’s finding a Republican party almost entirely unwilling to cooperate. During the time Jones is ferreting out intelligence from those who have it, Burns offers a lot for his audience to absorb in one sitting. That’s a good thing. What’s so good is that he zeroes in on specific subjects where several laws are broken by people who are to uphold it. They expect the American people to obey the law, but don’t themselves? That’s not how it works.

Burns illustrates that the evil deeds being implemented are known and hidden by those who must be exposed for partaking in the schemes. Since some of us don’t pay attention to the news, it’s critical that someone shows them what misconduct in government looks like so they can recognize it when it happens again. ‘The Report’ and the movie ‘Official Secrets’ are must-sees, in my opinion. It’s appalling to find out what the Bush administration was allowing. Dan Jones is more and more repulsed by what he finds.

Luckily, Burns doesn’t hold back. Visually, he fully reveals for those who didn’t know about it, and for those of us who did, the torture methods used on prisoners, be they guilty of any crime or not. You’ll be enraged at what you see and appreciate the impressive performance given by Driver, who not only shows shock and disgust, but the vital anger needed to continue his pursuit of the facts so passionately.

The CIA starts slowly by humiliating their prisoners and instilling helplessness in them. To achieve this, they perform mock burials, which is to confine a person in a box. That’s bad enough, but they liked to add cockroaches, as well.  They used sleep deprivation and wall standing. These methods were brutal, but nothing compared to the waterboarding and the rectal rehydration. At this point, the prisoner will agree to kill or sell their children to survive. The interrogation methods would hardly ever lead to any usable information.

Jones also uncovers how our top intelligence agency went on to eradicate evidence that would implicate anyone above them. What Burns’ script shines a light on is quite disturbing, indeed.

The supporting cast around Driver, who helps tell the story of who, what, when, and where, are convincing and persuasive. As thought-provoking as it is, ‘The Report’ will inevitably be compared to ‘All the President’s Men.’ Not that there’s anything wrong with that. Burns doesn’t tell you what to think, but while his thriller sticks to the source material, he does entertain as he provides some insight into what every American should know about their government.

The report Jones filed is 7,000 pages. The movie does its best to break down but a small percent of what’s in it. There’s too much to unfold for one little review, so I’d like to say that I highly recommend you watch it if you’re into politics today, as it offers a glimpse behind the scenes of what goes on with oversight and explains why it’s so desperately needed. It’s frightening what can go wrong without it.