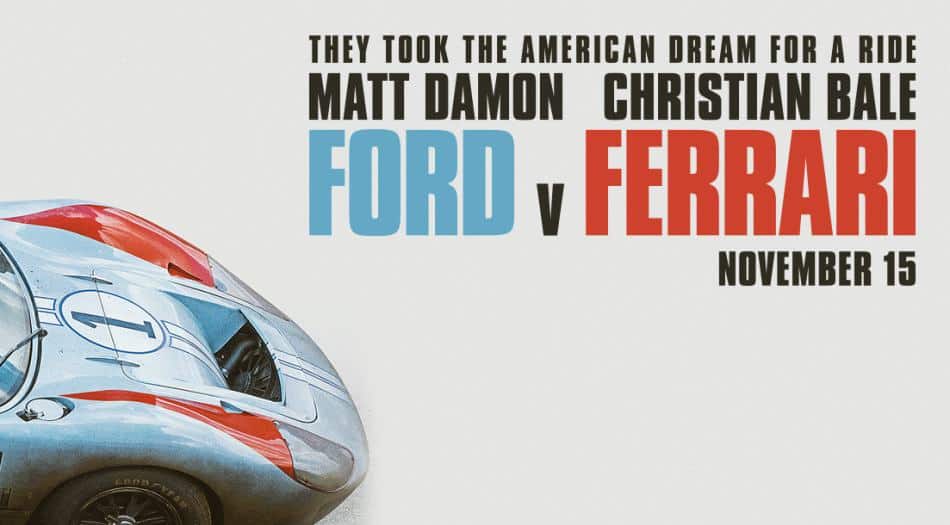 “Ford v Ferrari” is a true-life based story of power and speed, and the men behind the scenes that made the headlines. The early 60’s was a time of trouble for the Ford Motor Company. But a brash young executive comes up with an idea that seems insane. Ford could create sports cars that would rival the finely-tuned racing giant of Ferrari. The Italian company builds racing machines that have won the “24 hours of Le Mans” for a decade. Could an old fuddy-duddy car company come up with a strategy to beat the very best at the famed international race? Who could they find to design and drive such a record-breaking driving machine?

Henry Ford II (Tracy Letts) is a powerful force in the car industry. But his company has been losing its reputation as the leader in sales and quality. When a young executive named Lee Iacocca (Jon Bernthal) somes up with an idea to compete in the Le Mans, it sounds crazy. Another VP named Leo Beebe (Josh Lucas) says that the idea is worthless. But Ford II thinks that it needs to be investigated. Iacocca goes to find the only American who had every won at the Le Mans, a driver turned race car designer named Carroll Shelby (Matt Damon). Shelby has been out of driving for quite a while, but he has many close friends who are top-notch drivers. The best among them all is a British fellow named Ken Miles (Christian Bale). Shelby gets the approval to start a new design that would win the race at Le Mans.

Ken Miles is a perfectionist driver, and he will not suffer the interference that will come from the corporate overlords at Ford. He has a hot temper and he is set in his ways. His wife Mollie (Caitriona Balfe) and his son Peter (Noah Jupe) are ready to support him. Shelby knows that Ken Miles will rub the Ford executives the wrong way. But he wants the freedom to run this project as he sees fit. The racing car that they have put together will blow the doors off any driver in a Ferrari. But only with the perfect driver in the Shelby’s new perfect machine will the Le Mans perfection be possible.

Shebly has come up with a perfect vehicle to take into the ‘Ford v Ferrari’ battle. But Leo Beebe prevents Ken Miles from being the perfect driver. They of course lose, and Ford II is furious. His reputation is on-the-line. Ford II (and the other executives) go to visit Shelby and his team in California. Shelby, in a very creative way, gets Mr. Ford II alone long enough to convice him that the perfect driver is Ken Miles. Shelby now has full control to do what needs to be done. The next year in the Le Mans, it will be the big face-off between the upstart Ford team and the long-standing experts from Ferrari. All will hinge on this race, and the outcome will be one for the history books…

“Ford v Ferrari” revs up into a fine-tuned movie that features racing, but the real life story that is played out is fascinating. The cars and the track play a big role – but the human emotions of the people involved are what drives the movie. Christian Bale is a major heavyweight player as Ken Miles, and his portrayal hums along just like the Shelby engine. Matt Damon does a great job being the automotive genius Carroll Shelby, and he also hits the checkered flag of a winning performance. All the other actors contribute as an expert pit crew to this movie, getting passion and humor in each scene. Tracy Letts is especially fun to watch as the auto tycoon with very big dreams. The overall effect just blows the doors off any competition. James Mangold has crafted a wonderful movie that gives voice to the card nerds of the world.

“Ford v Ferrari” is racing into the theaters, and you best get yourself tuned up and fully fueled. Because this movie will rev your engines and blow your doors off. When you see this movie, make sure to try and see it on the biggest screen with the best sound system available.