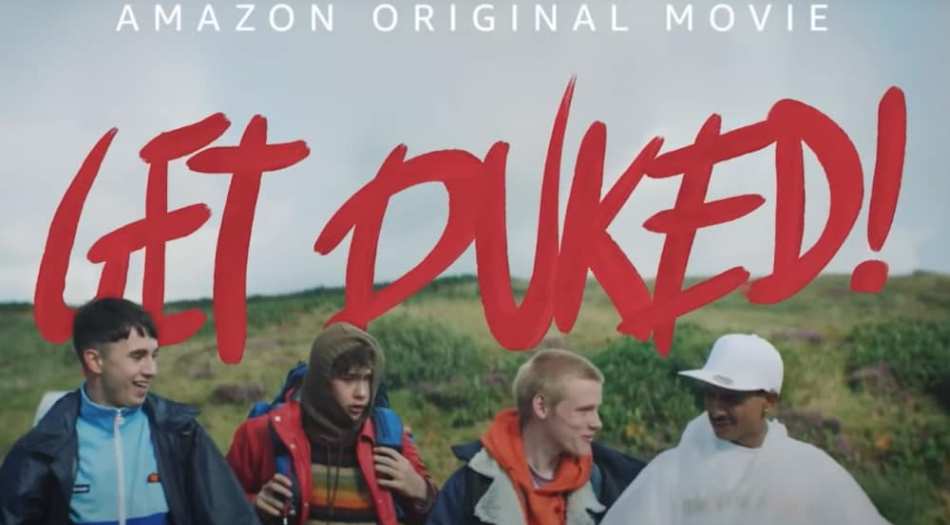 “Get Duked!” is the comedy-horror mash-up movie that follows some inner-city ‘Boyz’ who get dropped off into the Scottish Highlands for rigorous trek over hill and dale. Along the way they meet up with some Royals who have murderous intent. The young juvenile miscreants, along with one other home-schooled do-gooder, are avoiding criminal charges by taking the “Duke of Edinburgh Award for Trailblazing and Hiking” challenge. They do not notice that the first letters spell out DEATH…

END_OF_DOCUMENT_TOKEN_TO_BE_REPLACED 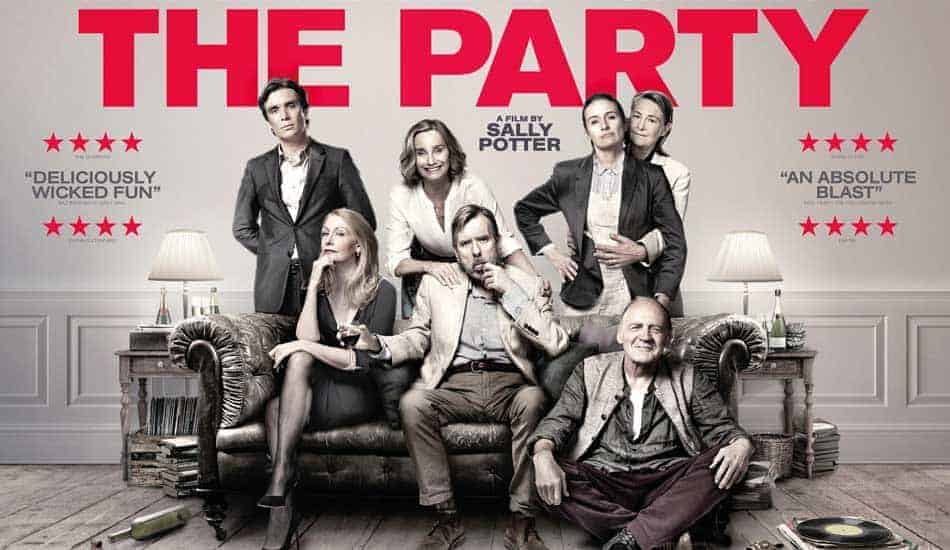 We start this cunning, noble achievement that writer/director Sally Potter (Orlando, The Tango Lesson) has presented us with, by waiting for a closed door to open as if we’re the ones about to be allowed entrance. Janet (Kristin Scott Thomas) opens the door but instead of greeting us with a smile, we are met with a gun to the face. Color me intrigued. That’s quite an arresting way to start the film. Potter wanted us immediately captivated and achieves this goal with the violent gesture which is a shrewd move for any director to make. Now that she has us hooked, she jettison’s us to an earlier point in the evening, before people show up for a celebratory dinner at the apartment she shares with her husband Bill (Timothy Spall). Bill mumbles to himself in the living room as if almost in a fugue state of some kind. This gets a little daunting but plays a large part in the story later.

To set the tone, The Party is exhibited in black and white, with the haunting yet seductive tune, ‘What is this thing called love?’ by Sidney Bechet playing on vinyl in the background. In fact, I have it playing as I write this. It’s splendid and both elements together give the film the vibe of an early Woody Allen picture. 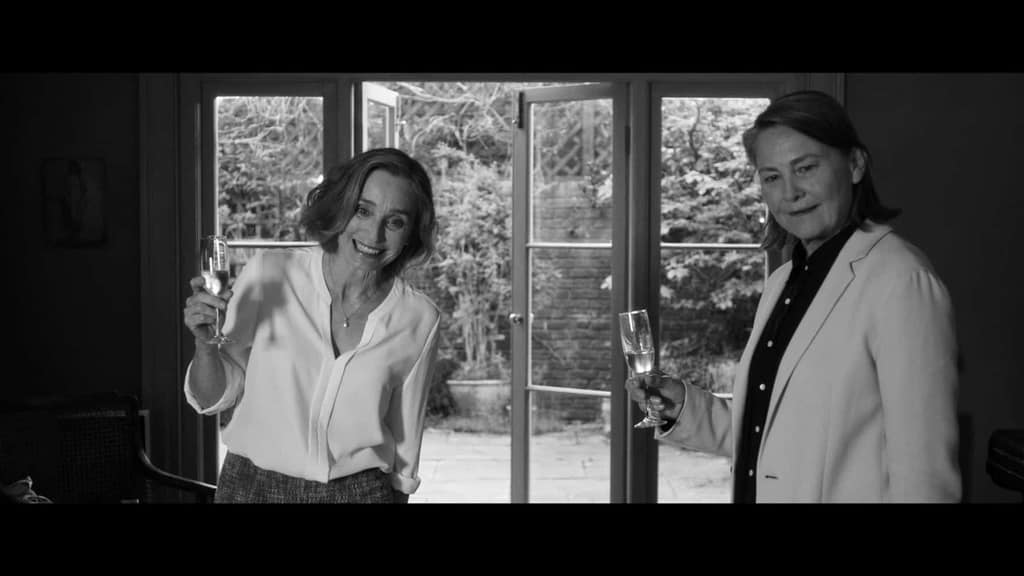 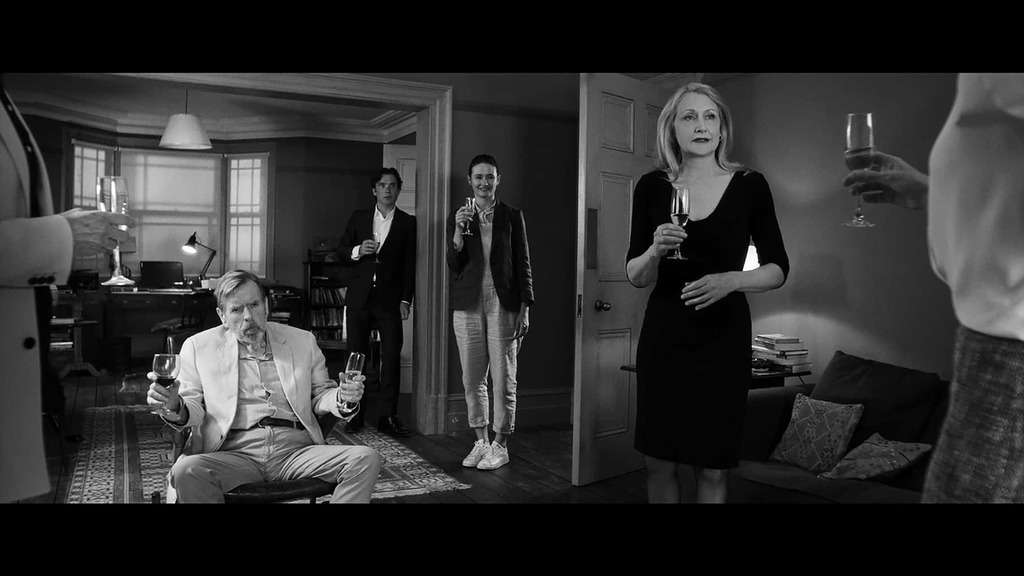 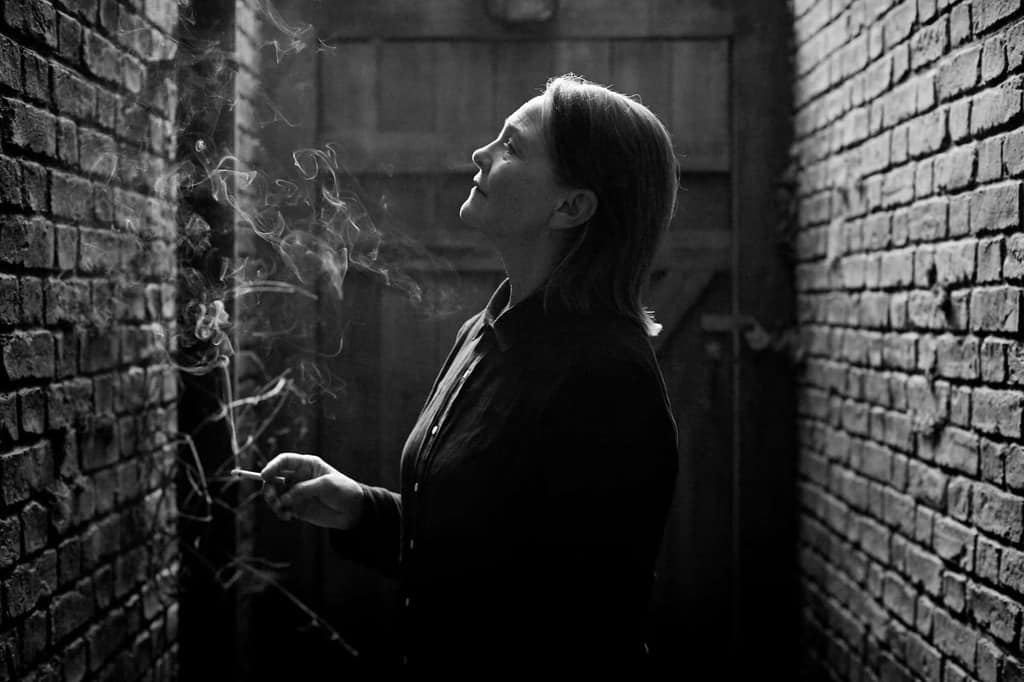 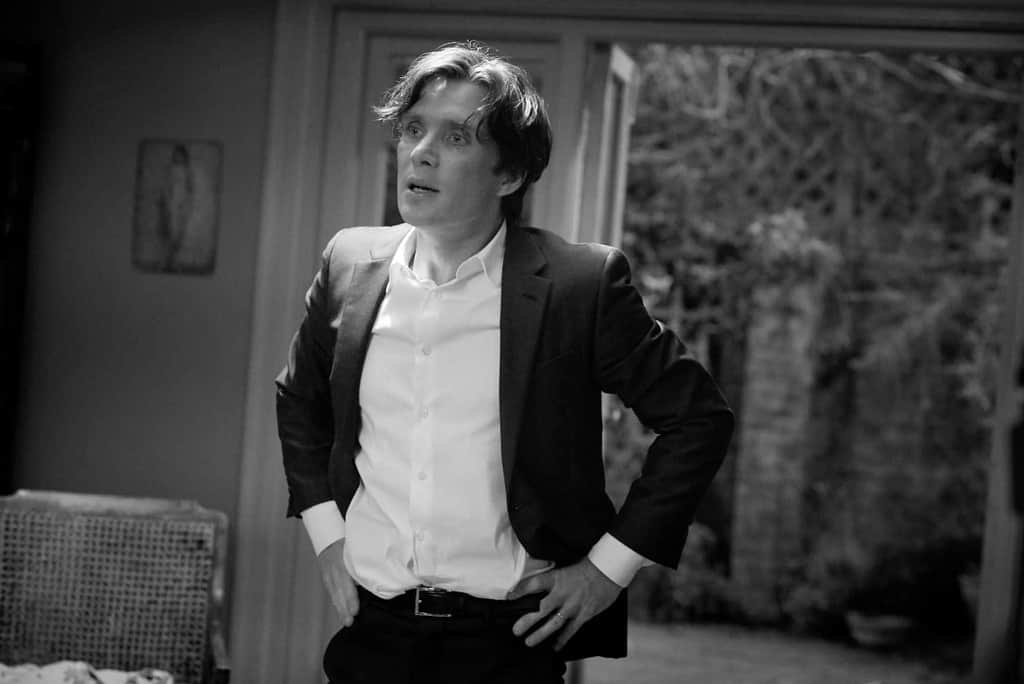 Soon, we’re introduced to the guests as they file in, staggered so that we may have a complete and thorough examination of their character.  Each congratulates Janet for a political accomplishment of some sort. Whatever the reason, and this is never quite made clear, this has all been a sophisticated setup to keep you restless and itching to find out the consequences as to why a celebration over a political win leads to a weapon being drawn.

Cherry Jones with her gravelly voice and unimposing self-assurance, is a strong presence in the film, playing Martha, married to the younger Jinny (Emily Mortimer) who is with child… with children. Martha, who came for a bash, now faces the biggest decision of her life.

The very memorable character, April, is played by Patricia Clarkson, who gets to somewhat portray the comic relief for the film but also carries the weight of being a more stereotypical female. Bitchy and ruthless, she attacks her beau Gottfried (Ganz) but she doesn’t discriminate, never holding her tongue. You can tell Clarkson has fun with the role getting to point out everyone’s flaws without regret.

Tom, played by the charismatic Cillian Murphy, walks in agitated and frantic about a deed he must carry out. When you learn why he’s there, you’ll wonder how he kept it together for so long. Murphy’s performance is aggressive and potent, however, I would have liked to have seen more of him.

All the players who postulate, proposing to know the reality of their situation, end up being fools, destroyed by their own egos. The actors who play them and bring this terrific tale to life, do a fantastic job of keeping the audience profoundly involved in the alternating storyline, without revealing the nuts and bolts of the situation and not exposing who they are or what’s going on until the director wants you to know.

Outside of these performances, what you’ll appreciate the most is learning what the party truly is… and how this yarn ends. Labeled a comedy/drama, the comedy is, to a large degree, missing and at times it feels like it doesn’t know what it wants to be. This is brilliant because struggles in life often turn out to be exactly that… not what you had planned. 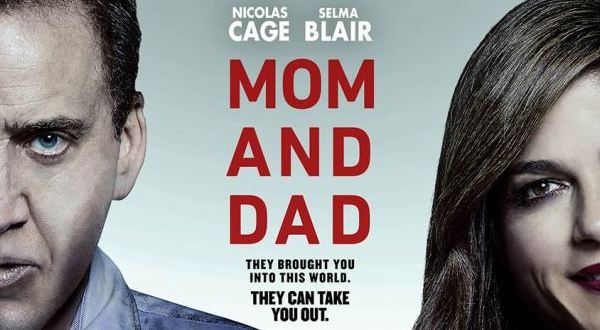 Say you could take a movie like “The Happening“, where a mysterious plague overcomes people and makes them want to commit suicide, but it changes the results a little. Now, it only affects the parents, who exhibit a change in the attitude from protecting their children, to instead wanting to kill them.  Now add the forever crazy antics of Nicolas Cage and you have “Mom and Dad”, bizarre creation that gives you another reason to demand that Cage hand back that Oscar he won back in 1995.

Brent Ryan (Nicolas Cage) and his wife Kendal (Selma Blair) have the ideal life in the suburbs with their two kids. Carly (Anne Winters) is a teen-ager in high school, and Josh (Zackary Arthur) is her younger brother. The whole family gets along pretty well, but Ryan is dealing with a mid-life crisis and Kendall wants to be back in a creative job like she used to have. Carly and her friend Riley (Olivia Crocicchia) would like more freedom to have fun. Carly has a boyfriend Damon (Robert T Cunningham), but Brent does not like him because he is older, and he is black.

But there is a sudden turn in events. The parents are overcome by an insatiable urge to murder their children. Regardless of age or disposition, they are driven like wild animals to slaughter the fruit from their loins. It happens slowly over the course of one day, and then the first reports come in of dead children. The news is ablaze with reports of theories of all sorts. It could be unusual microbe activity in the water, or a sinister plot of an evil foreign nation. But these parents are compelled to kill the lovely little shining stars in their lives.  They are guided by an unseen desire to destroy their spawn. 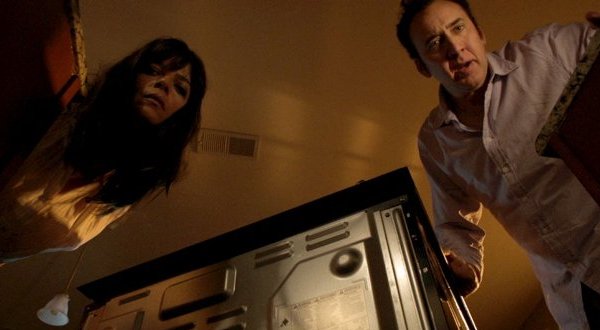 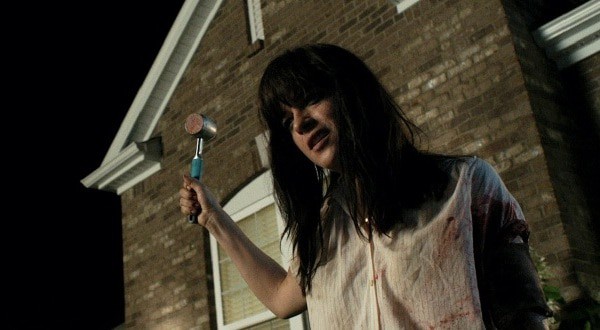 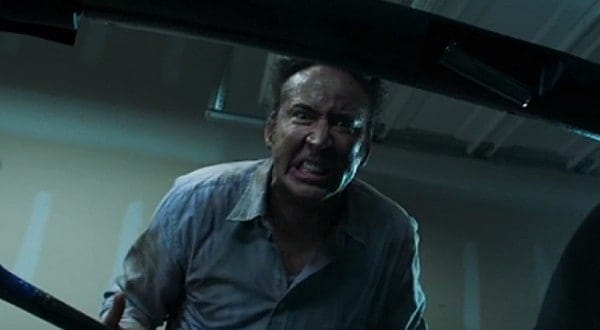 Carly and Joshua are caught up in the murder spree that is about to imposed by their parents, Brent and Kendall. The can hide and they can run, but they have nowhere else to go. Damon has been able to escape his own death-by-paternal-unit, so he comes by to help. Carly is clever in ways that can fight back, so she can survive with her brother. Oh, and of course, this all happens on the night that Brent’s own parents are coming over for dinner. His dad Mel (Lance Henriksen) is of course under the same spell and feels the need to do the dirty deed – kill his own son in a gruesome manner.

Yes, this is a frankly bizarre and twisted movie. But it is a crazy set-up that seems tailor-made for the frantic and manic performances for which Nicolas Cage is most famous. And he does not disappoint here at all. In a sequence (a flashback that is set weeks before the weird killing virus), Cage plays Brent at home in the basement constructing a large pool table. And then in a fit of rage and fury, he destroys the same pool table with a sledgehammer, all while singing the “Hokey Pokey”. Ridiculous? Yes, it is – but at the same time it is fascinating to watch.

Brian Taylor is also the writer and director (with partner Mark Neveldine) of movies like “Crank”, Crank: High Voltage” and “Ghost Rider: Spirit of Vengeance”. That is, writing and directing movies that are so tilted and perversely skewed is second nature to him. So this movie fits quite well into his wheelhouse.

Is this movie great or meaningful? Is it even good? The movie is competently made, but the soundtrack does not fit at all. The acting is somewhat uneven. Cage and Blair are really good, but there is no depth to being depraved. Anne Winters is the best, because she has a real emotion of fear and wanting to protect her much younger brother.

In Phoenix area, playing only at the Harkins Valley Art in Tempe.