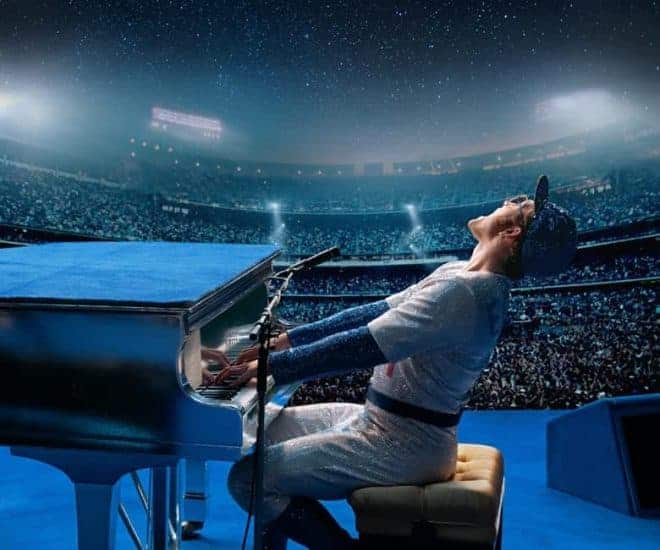 If you’ve always liked Elton John songs, recently discovered his music or have no clue as to who he is, you’ll enjoy the way this movie presents his life story. Most biopics tell you about the person using dialogue to describe them but since Elton John was such a big star, director Dexter Fletcher allows the songs to tell you who Elton, originally named Reggie Dwight, is. You may not realize what you’re in for when purchasing a ticket to see this, so I’ll inform you. The movie is similar in style to films such as, ‘Mama Mia,’ in that the narrative is largely told through musical numbers, complete with dancers. I wasn’t quite expecting that but enjoyed the way it went about telling the audience who ‘Reg’ (Egerton) became, through lyrics in his songs. Though the songs were written by his partner Bernie Taupin (Bell) and weren’t necessarily used in order of release date, the lyrics were meaningful and impactful, and you don’t question Fletcher’s decision to be part of the script; to have the lyrics chronicle Elton’s personal development, concentrating on the earlier years. At times, the film gets depressing, but if he hadn’t experienced heartbreak, he would never have become the musician he did.

The movie starts with Elton Hercules John going to therapy for the first time, telling everyone why he’s there. He’s a sex addict, a drug addict, an alcoholic and a shopaholic. When his childhood is brought up, a young Elton is singing on the streets of where he grew up. Adult Elton, dressed in one of the wild costumes that he wore to the therapy session, stands and watches the child. He’s invisible to the child, much as the child he once was is invisible to the parents in the scene… particularly to his father. Luckily for the little boy, and luckily for music fans everywhere, his grandmother Ivy (Jones), notices his talents on the piano. The boy can play by ear. She supports him and gets him piano and music lessons which then leads to a scholarship to the Royal Academy of Music. Once it’s clear how much talent the young boy has, it isn’t long before he’s playing backup for singers. Outside of his grandmother’s constant endorsement, he’s never had anyone really encourage him until he plays backup for a Soul tour from America. They’re more than happy to give him the advice he needs, which is to write some songs and let his inner musician out… stop hiding his true self. Since he can write music to a monologue, he takes that advice and finds a writer who needs music for his lyrics. That writer is Bernie Taupin. During this segment of the film, not only does Elton realize how talented he is but that he’s gay. Taupin supports him no matter who he is. They get on a record label and get booked in America at the famous West Hollywood nightclub called the Troubadour. The Troubadour has been hosting famous musicians since 1957.

Elton is excited for the chance to show America what he has until he finds out Neil Diamond is in the audience. He gets nervous but once that passes, he finds his strength and, consequently, this is where his unique style blossoms. He also meets John Reid (Madden) who becomes his new manager and lover. Scenes with Reid get rather steamy. This character and their time together aren’t exactly explained very well but go with it. You’ll figure out who he is and when their years together were. Reid is responsible for the young musician becoming the wealthiest musician in the world. Unfortunately, Elton is living proof that money can’t buy you happiness. His career couldn’t be better, but he still doesn’t have his fathers respect, something he has been trying to get since he was born. He tries to have thoughtful conversations with his mother several times throughout the film. The best she can do for him is to try and advise him that if he chooses homosexuality, he’ll never be loved.

Having mostly been disappointed by those closest to him, he eventually comes to the conclusion that, ‘Real love is hard to come by, so you find a way to cope without it.’ Soon after, he fights with Bernie and tries to end his own life in an underwater scene where wee Reggie makes another appearance. You’d think that her son trying to kill himself would soften his mother toward Elton but not Shelia (Howard). She gets worse. She likes his money, though. It’s hard to believe but she tells him that she should have ‘Never had kids.’

Next, comes the song, ‘Sorry Seems To Be The Hardest Word,’ which has the lyrics,

By this time, you’re most certainly invested in the film and the characters. The acting by Egerton and the entire supporting cast surpasses expectations and the script is authentic and true to who Elton was and is inside. After watching, you can’t help but think about the fact that most biopics of this nature are made after the artist passes on.
Knowing we’re all going to be watching, Elton gets to observe his life story unfold on the big screen and not only relive his experiences but see how others have interpreted his actions. It must be daunting.
After seeing the finished product, I believe he has to be happy with how it was done. However, why they decided to insert Egerton into the original video for ‘I’m Still Standing’ makes little sense, particularly since it was at the end of the film. That would have been a good time to have allowed the audience to see the real Elton John having some fun so using Elton in his own video would have been a better choice in my humble opinion. Regardless, see this movie asap! Good luck getting his songs out of your head after.

*Stay during the credits for more information.