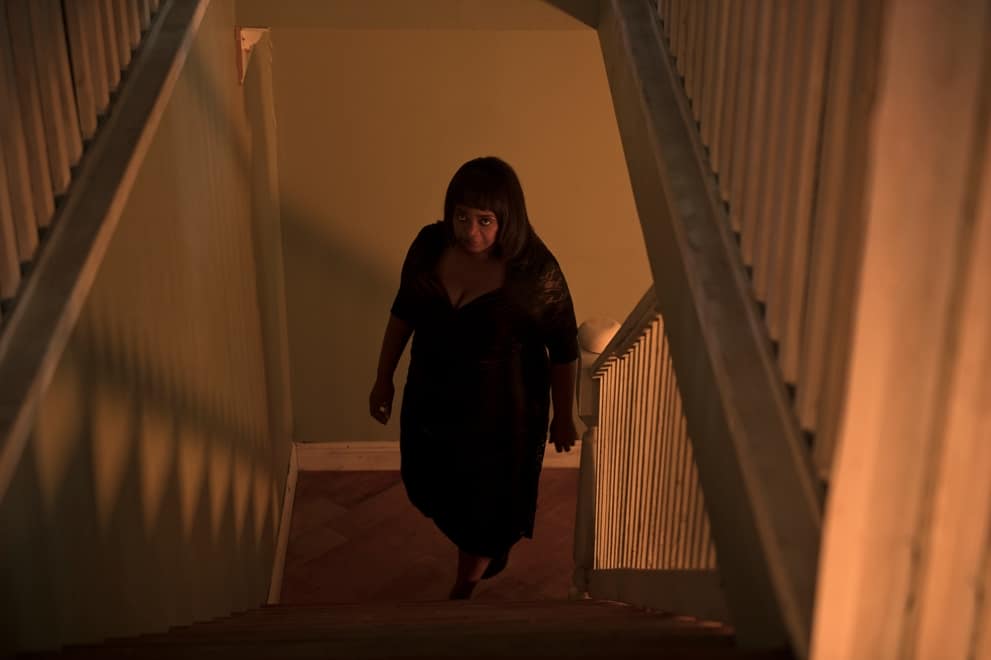 ‘Ma’ is a moderately gripping, riveting movie with a few good jump-scares but can’t quite live up to the genre that it’s labeled as. IMDB has it listed as a Horror/Thriller and the trailer sold us on the fact that this would be a terrifying movie. I generally count on a movie defined as a Horror to scare me at some point. I kept hoping for it and expecting it to come but the scares never did. ‘Ma’ was disturbing, and it was definitely macabre at times, but it wasn’t a horror film. Trust me… if you go in with lower expectations, you’ll enjoy it a lot more. That said, the characters are well defined and Ma, or Sue Ann, played on the nose by Octavia Spencer, is incredibly creepy with a cold stare that will send chills up and down your spine. She plays her as a warm, concerning a woman who’s a friend to everyone she comes across but as the story unfolds, she changes. It isn’t long before the veneer falls away and her real temperament comes through.

After moving to her mother Erica’s (Juliette Lewis) hometown, high school student Maggie (Diana Silvers) almost instantaneously hooks up and becomes friends with a group of kids from class. She’s a nice girl, innocent, but decides to go out to the rock quarry to drink with her new pals. With her mom working nights at the casino, what else is there to do? What they like to do is go to a liquor store and attempt to talk an adult into going in and, for a small fee, purchasing something alcoholic for them to drink. It isn’t going too well until Sue Ann walks up. She tells them no, too, at first but then she obliges, and they love her for it. While they’re drinking, she calls the police and tells them she saw some kids drinking at the quarry. She does this for a reason. Next time they want to party, they’ll have to find a safe destination with which to drink. Her basement perhaps? She offers it to them the next time she sees them. They agree and now she’s in. They’re her friends. When they’re in her home, she has influence over them, gets on their good side and she can do other FUN things.

As we get to know her better, we also get to know the kids and their parents’ stories. Turns out, the parents of these very students went to school with Sue Ann. She knew them quite well and they weren’t very nice to her either. Several of these plot points get a bit sloppy but if you don’t look at the script under a microscope, the development of the narrative could be considered intriguing enough to keep you interested in its outcome. Once you learn Sue Ann or Ma has a history with the parents of the teenage partygoers, the movie has a ‘Carrie’ vibe to it. If it had been bolder and gone darker, it would have pleased horror film fans more but as it is, director Tate Taylor (The Girl on the Train, The Help) takes you only so far before pulling back and ultimately leaving you wanting more. With his resume, this surprised me.
Anyway, ‘Ma’ is the kind of movie I can recommend you see but keep in mind that if you’re a veteran horror fan and want to check this out, seeing this at a matinee might be the best way to spend your time.