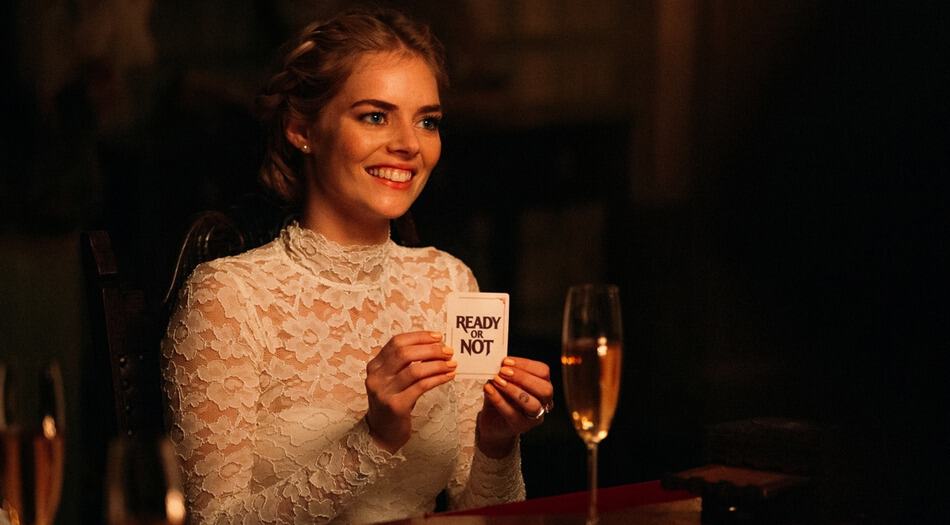 In-laws, am I right? No one ever wants to deal with the In-laws but Grace (Weaving) really wants to make a good impression! It’ll be especially difficult with the kind of family she’s marrying into… the filthy rich. Fiancé Alex (O’Brien) is a Le Domas whose family is of old money that has come from the producing and selling of board games.

Let’s go back 30 years. With amber hues that set the tone magnificently, the movie starts with a bang. The camera, Kubrick style, follows behind children running through the halls of a large home. Daniel, the older boy, hides the younger of the two, named Alex, in a cabinet when a man being hunted is seen. He’s been injured. The older boy screams to someone that he sees the man. People come from everywhere to both seize and harm the man. Daniel watches.

Cut to thirty years later. As I previously mentioned, Alex and Grace are about to get hitched. She’s ecstatic that she’ll not only be married to the man of her dreams but to be marrying into wealth. She’s never had money, let alone known a lot of people who had so much of the stuff that they grew up with servants. Now she’s about to have them, too. She looks out at the people waiting for her to walk down the aisle. She and Alex are to be wed on the grounds of the estate his family owns. Alex offers her an out and encourages her to take it; even suggests they leave. She tells him she’s all in.

He tells her about the tradition this gaming family has. It’s so important to them that they consider it a ritual. When a new member joins the family, at the stroke of midnight, they all meet to play a game. The newest member sits with the others at a round table and they learn of an important box that has been passed down throughout the years to where it now sits. They also hear who it belonged to and why it means so much. She’s told that she must insert a blank card into the box. The name of a game will be stamped onto the card and whichever game is on the card, she must play… no matter what.

This sweet girl can hardly contain her excitement. She’s eager with anticipation to show the family that she can, ‘Play the shit out of checkers.’ As you learn more about what can happen, you remember back to the opening scene and the injured man. Little hints are also dropped to the audience that gives you an indication that this might not turn out so well for the innocent young woman. As they sit at the table, one person says they pulled the game of chess. Another says they drew old maid. She’s so delighted that it’s finally her turn. She wonders what she’ll get. Except for one ornery character, up to this point, you can see she’s a charmer and that the family is happy with the choice Alex has made.

His mother Becky, played with classic elegance by Andie MacDowell, is particularly smitten and is happy that she has returned him to the family. However, feelings and games don’t mix. She pulls the card from the box and turns it over. It reads, ‘Hide & Seek.’ The air leaves the room. The members of the family all look at one another and at Alex as his face turns white.

There’s tension in the theatre, as well, because the filmmakers have done a spectacular job of getting you to know and like Grace in a short period of time. Actor Samara Weaving, who plays the role of Grace, is wicked good in the part. Her bright blue eyes penetrate through the dark tones used to create the world she is now forced to inhabit. I say forced because once the game starts, the doors and windows are locked. There is no way out and you feel just as shut in as she. For such a huge house, the poor thing sure can’t find a good place to hide! Seems the directors wanted to make sure you don’t relax. You fully believe that nothing she finds will be adequate to keep her from being found. Anyway, she has until the end of a song that’s played to hide in the mansion before the family entire start to search for her. If she stays hidden until dawn, she wins. Can she?

I could go on and on about what happens after, ‘Ready or not, here I come!’ is heard, but why spoil the fun for you? Knowing as little as possible is what will make watching the movie that much more memorable for you. If you want a little mystery sprinkled with your thrillers, this is the film to see. Myself? I wouldn’t really label this as a horror film as much as I would an incredibly dark comedy with some blood and guts in the style of the murder mysteries films of the past. Think ‘Clue’ or ‘Murder by Death’ mixed with almost any horror where a female is in peril. You’ll be pleased to learn that the script, by Guy Busick and R. Christopher Murphy, offers a running gag that you’ll enjoy. Rather than the intended target falling prey to the hunters, the maids seem to keep getting in the way. It’s fantastic. See ‘Ready or Not’ today! This would have been a fun Halloween release but since the candy is already hitting the shelves, why not start early on your frights, too!