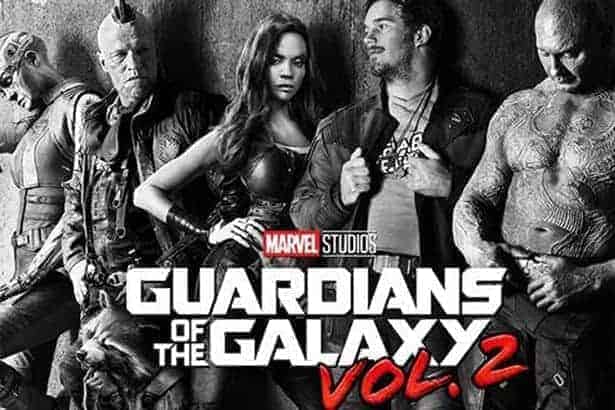 The Master of the Marvel Mix Tape is back. Yes, Peter Quill  and his gang of misfits have returned to the movies. “Guardians of the Galaxy Vol. 2” takes another step into the wilder side of Marvel’s never-ending stream of comic book heroes. Back in 2014, the first movie introduced the characters, and now you have more time to get to know your ‘Guardians’.

Quill (Chris Pratt), also known as Star Lord, is working with Gamora (Zoe Saldana) and Drax (Dave Bautista). With them are the two creatures; a genetically-modified raccoon named Rocket (Bradley Cooper) and humanoid tree-thing, now called Baby Groot (Vin Diesel). They are hired to fight off a monster for a group of gold-colored Sovereign people. They defeat the beast and win the release of Nebula (Karen Gillan), Gamora’s evil half-sister.

But soon the Sovereign leader is after the Guardians, and they hire a mercenary team of Ravagers led by Yondu (Michael Rooker). Yondu and Quill have a sorted history going way back to when Peter was kidnapped off  Earth. Peter Quill is still looking for his father, when the Guardians meet up with Ego (Kurt Russell). Ego is an ancient being called a Celestial, and he has created an entire Living Planet based on his brain power.

Quill learns that Ego (his human-like avatar, not the Planet) is his actual father. But Quill is still upset that Ego loved his mother, but then left her. Quill wants to go along with Ego, so that he can be a semi-immortal creature, too. But Gamora is wary, and she has a right to be. Not everything is as rosy as it appears. Yondu has his crew mutiny against him, but with help from Rocky and Baby Groot, he’s back in command. 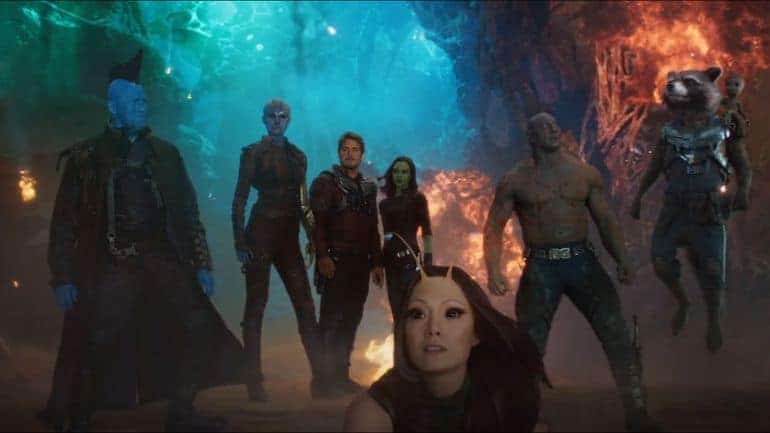 Nebula escapes and goes after her half-sister Gamora. They fight an attack each other, but they do eventually find common ground. Ego has plans, much larger than what Peter Quill can imagine. But his plans would cause death and destruction of thousands of planets. All of the Guardians, along with Nebula and Yondu, team up for a good old-fashioned fight to the finish. Ego is immortal and all-powerful, but he still has some weak spots. If the crew all work together, can they find the answers in time?

Marvel scored really big with the first ‘Guardians’ movie, and now they have a chance to double-down on the crazy fun of these characters. There is such a high-energy spark within this group that the easy dialog and funny situations just are a joy to watch. Each characters get a little time to develop more and become deeper and more intense. Some are real standouts, such as Yondu. His character was not much more than a cameo in the first movie. But here Michael Rooker really gets to make fantastic impression.

All the actors are great and well cast for the roles. The most fun is to see Kurt Russell coming back into movies big time, and this role for him is just icing on the cake. Baby Groot is such a little huggable sapling, that every time his image is on screen, you just want to say, “Awwwww”.  Quill is still clever and snarky, Gamora is strong and stoic, and Drax is a huge mountain of power, with a big soft heart.

The movie is full of pop culture references. Lots of things are brought up, such as Pac-Man, Cheers (the TV show), Knight Rider (the TV show) and David Hasselhoff. There are again lots of Marvel cameos, like Howard the Duck, Cosmo the Space Dog and (of course) Stan Lee. There are a few celebrity cameos: Sylvester Stallone, Ving Rhames, and Michelle Yeoh.

Yes, the “Guardians of the Galaxy” have come back, and they are saving the Galaxy again. As Rocky says, “We can really raise our rates now”. It seems that they have raised the quality standards, too. Hey, and it can also be found in 3-D and in IMAX format, which actually makes for Greater Guardians!