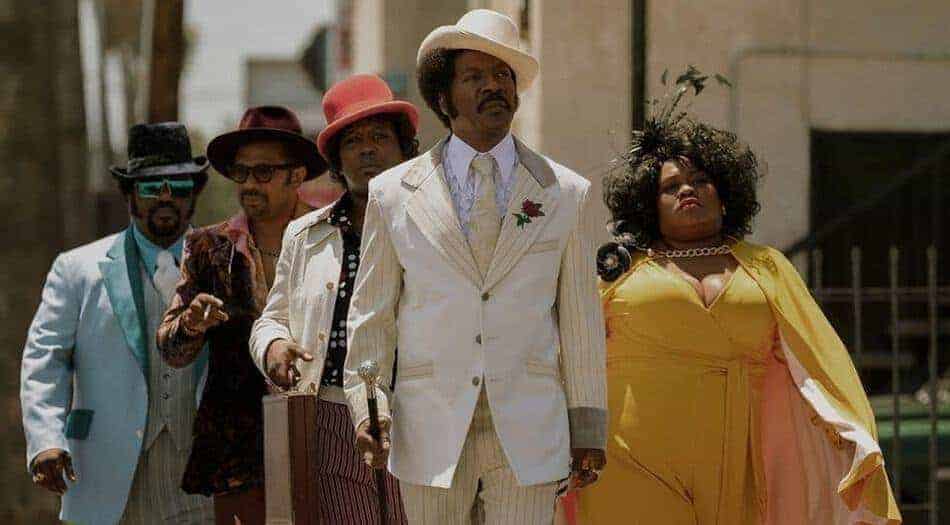 In this incredibly impressive performance of all-around entertainer, Rudy Ray Moore, Academy Award nominee, Eddie Murphy, becomes Moore and his famous film character, Dolemite. ‘Dolemite Is My Name’ is a tribute to Moore who spent every penny he had to follow his dreams and be what his farmer father said he could never be… somebody. The 1970s Blaxploitation phenomenon didn’t know what was about to hit them.
​

Moore was working as the manager of a record store but had big dreams of making it in Hollywood. He couldn’t stand not doing something toward his goals and as he stood in the record store he couldn’t help but wonder, ‘How’d my life get so damn small?’ Interested in stand-up comedy at the time, he hears a bum reciting a Dolemite routine. Later, he gets with the bum and some of the bum’s friends, he refers to them as the ‘Liquor Store Wisemen,’ and offers them a few bucks and some liquid refreshments to record every dirty joke they tell.

He takes their material home, changes and perfects the jokes and character, and makes it his own. As Rudy Ray Moore, his routine and gotten stale. As Dolemite, he was considered very original. The act blew people away. Word of his act spreads as he gets the attention of the clubs, the radio stations and soon starts climbing the Billboard charts. Opportunities he had always dreamed of suddenly become available.

Moore could dance. He could sing. He could make people laugh but when he looked at the silver screen, he finally knew what his true calling was; motion pictures. He got that idea when he and his friends went to see a comedy called ‘Front Page.’ None of them laughed because they couldn’t relate to the material. With the recent success he had selling his comedy albums, he got it into his head that he and his friends could pull off making and selling a movie, too. At this point he felt he was invincible so why not try?! He has friends who have always believed in him and supported him. After seeing the album become a big hit, they follow him into show business, too. Up until now, the movie is satisfyingly amusing. The characters and writing are solid; charismatic and appealing but when the team, writer Jerry Jones (Keegan-Michael Key), pompous director, D’Urville Martin (Wesley Snipes) among them, gets started trying to make the first Dolemite movie, it picks up more characters and more incredible actors playing hysterical roles. It’s a tough road but his movie finally gets released. And surprisingly, his many business failures just might finally come to an end as ‘Dolemite’ becomes a runaway box office sensation.

Though it’s a comedy and a damn good film, you can’t help but feel some sadness. For the time, Moore was bold, overbearing, brash and extremely arrogant. This turned people off for the most part. He was just a couple of decades ahead of himself. Today, he’d have fit right in. He’d probably be considered a genius and own his own studio. As you watch the film play out, you can see his ingenuity and how keen his eye was. This being the case, you might feel bad for what could have been. Many have praised him for his influence on them. He would have enjoyed that someone took time to notice. You will, too, and you’ll love this movie for who he was and for the fact that Eddie Murphy is back!

Dolemite Is My Name