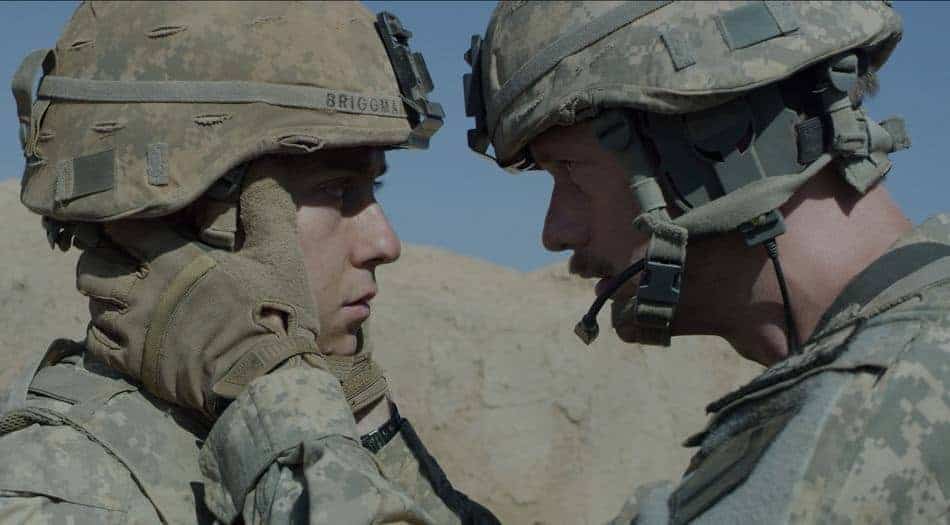 ​The point that a leader of young men is trying to recruit his greenhorns to perform illegal acts is peppered throughout the film in shocking and despicable ways. The narrative strongly focuses on Staff Sergeant Deeks, portrayed cold-heartedly by Alexander Skarsgård.

He’s more of a central figure than the protagonist, Andrew Briggman (Nat Wolff), ends up being. We see Deeks attempt to instill anything but exceptional values into his charges who are vulnerable little boys he wants to mold into tiny versions of himself.

That wouldn’t be such a bad thing if Deeks hadn’t become such a monster. Due to his appalling actions, he ends up combating the Army while on active duty. Dan Krauss is both the writer and director of the film. Interestingly enough, ‘The Kill Team’ is based on his 2013 award-winning documentary of the same name. The film is his chance to revisit the material by making this piece his narrative debut. Knowing the subject matter quite well beforehand helps his story come across as straightforward while also being frightening and entertaining. I’m not sure if this was Krauss’ goal, but after watching his film, you may change how you scrutinize the behaviors of commanders in the military.

Krauss opens on Briggman, who can’t wait to go into the Army, as did his father, William (Morrow), before him. He’s a good boy but wants to prove himself prepared to lead. Deeks is his ticket to measure up to his father. He lets his Sergeant know he’s in to give one hundred percent, which is what Deeks wants to hear. This admission gets Briggman immediately embraced.

However, his Sergeant and teammates do nothing but crush his dreams soon after, when he sees one of the main demands of him; murder. Briggman decides he can’t ‘play ball’ and does everything he can stop the actions of the rest. Scared out of his wits when everyone threatens him, he starts to break.

Having been a cinematographer on previous projects, Krauss insists his audience feels Briggman’s fear when fitting in is no longer an option, and staying clean may no longer be his choice. This yields some aggressive and powerful scenes for the actors to bring to life.

You’ll especially appreciate the bit where Wolff holds his own with the unhinged, ego-driven character Skarsgård plays so well. Krauss brings out worthy performances from these two actors. Their going head-to-head is reason enough to watch ‘The Kill Team’ unfold.

It’s a tragedy to watch Deeks decide his enemy is this idealistic young soldier, losing focus of his real mission, to fight for the principles of the American people. I won’t ruin it for you here, but a post-script at the end of the movie tells you what ultimately happens at the end of their journey together. An ending you may not see coming.