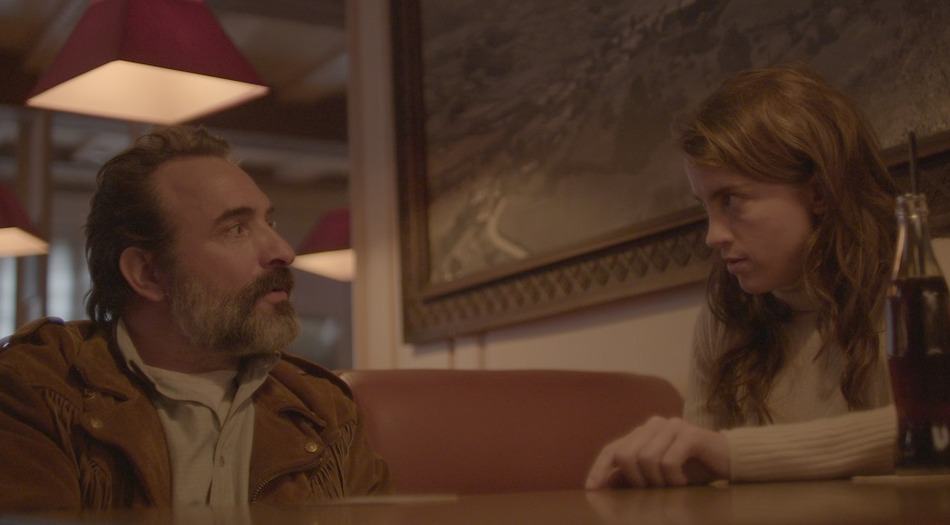 If you’ve seen ‘Rubber,’ you’ll know what you’re in for here. That film was from the inventive and peculiar mind of writer/director Quentin Dupieux who offers this similarly offbeat little number.

At the opening of the film, three people stand at the trunk of a car. They’re holding jackets in their hands. One-by-one, as they put the coats in the trunk, they swear this oath, ‘I swear never to wear a jacket as long as I live.’ A voice offscreen tells someone to close the trunk, and the scene ends. None of it makes any sense and leaves you scratching your head.

We move from that scene to one where our lead, Georges (Jean Dujardin of ‘The Artist’), is ramming his Jacket into a toilet bowl. I’ll let you in on a little secret. Those scenes will come into play again later.

Speaking of jackets, we next move to Georges purchasing a unique, 100% deerskin, fringe jacket made in Italy. He’s buying it from Monsieur B., who’s played by Julie Delpy’s real-life father, Albert Delpy. Monsieur B. tells Georges that along with his 7,500 Euros purchase of the suede, he’ll throw in an exclusive bonus. He’s getting a slightly used digital video recorder. What he also gives his customer, who’s going through a mid-life crisis, is a big ego boost when he tells him that he looks elegant wearing his new duds.

Georges then goes to an old hotel. Recently divorced, he rents a room for a while to start a new life as a proud deerskin jacket owning bachelor. The first thing he does is look in a mirror and admire himself wearing it. You notice he’s also admiring the coat a bit too much, developing deep feelings one never does with their apparel. Confident about his appearance, possibly for the first time in a long time, Georges goes to a bar and strikes up a conversation with a waitress and her female patron. Wanting to appear as if he’s a bigwig, to a limited degree at least, he tells them he’s a filmmaker. They think that’s very cool. He loves that response. All things considered, what you’ve definitely figured out by now is that Georges has never been cool a day in his life.

Not long after, he goes back to his room to play with his camera. While doing so, he finds out that the Jacket also has a lot of personality. By that, I mean he’s giving it life as he ‘interviews’ it. Is this in his mind, or does the Jacket genuinely have some sort of awareness and manipulative thought? It’s at this time, the Jacket seems to insist that they’re teammates, so Georges makes it clear to the covering that he’s the one in charge. It’s a good thing that he thinks so, anyway, but I’m not so sure that’s the case. Eventually, he and the Jacket want it to be the only Jacket in the world. When walking the streets, they’d be getting all the attention, which is something he eludes to earlier.

When Georges goes back to the bar, he strikes up a conversation with the waitress, Denise, who’s played by the ethereal, Adèle Haenel, from ‘Portrait of a Lady on Fire.’ She inquires more about his filmmaking because it turns out she’s an editor. I told you this to let you know that Denise ends up helping Georges with his film. What film do you ask? Exactly.

Since the Jacket wants all others eliminated, its owner, in winter mind you, has to think up clever ways to get people to give him theirs. He lines up coat wearing actors, asks them to remove their threads and put them in the trunk of his car. While doing so, they say the line I mentioned earlier, ‘I swear never to wear a jacket as long as I live.’

While Denise edits some footage of Georges and the Jacket that he gives her, plus the oaths he recorded, she begins to build a story. She has deduced that the subject is the Jacket or, as she puts it, ‘The fact that we all hide behind a shell to protect us from the outside world.’ Georges is excited about her enthusiasm. However, he’s not so thrilled about how his favorite piece of attire sees his progress of getting the jackets out of the way. When he has exhausted all reasonable ideas of how to please the parka, it looks like he’ll have to take drastic measures to satisfy it. He fashions a machete out of a fan blade and turns to murder next.

With this, Dupieux has taken us on the cinematic ride we never knew we want to make. ‘Deerskin’ is to be experienced, and I hope it’s seen for the dark comedy that it is. The main character is abrasive, pompous, and a bit cynical, which is twisted when bringing the tale together with the sweet and delightful, Denise. Still, the ending makes putting up with his not so charming attitude worth every second. Throughout the film, donned in his deerskin jacket, convinced he’s the coolest thing since sliced bread, Georges works not only on his film but collecting other articles of deerskin clothing, so he’s covered from head to toe. By the end of the movie, his goal is achieved but very short-lived. Turns out, he should have been concentrating on his character instead.

*You can purchase a “ticket” to stream the film through the Sedona International Film Festival on Friday, May 1st and at  DEERSKINMOVIE.COM