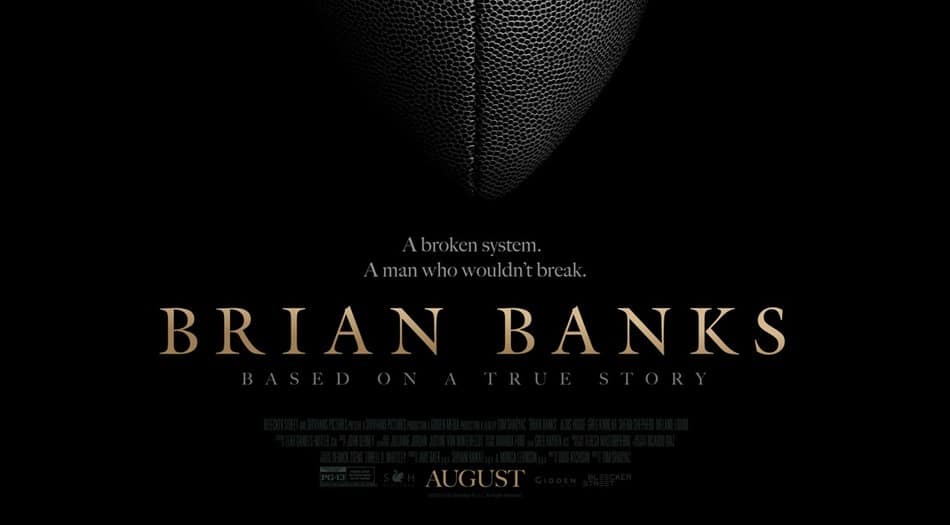 ​‘Brian Banks’ is an inspirational and moving film that’s based on a true story about a man facing overwhelming odds against him and overcoming them by refusing to give up. During high school, the naïve youngster was falsely accused of rape by a fellow classmate, Kennisha Rice (Roquemore). He served six years in prison for a crime he didn’t commit. Banks is played expertly by SAG Award-winning actor, Aldis Hodge. Hodge gives the character kind eyes and a sweet demeanor to make it easy for you to feel empathy for what Brian Banks endured. He’s been treated unfairly by a system that simply doesn’t care about what happens to him. He’s had enough and looks to change the direction of his life. Everyone sent to prison says they’re innocent. This man is and wants everyone to know it rather than just move on. In this hour and thirty-nine-minute movie, you’ll see how the real Brian Banks set out to prove his innocence.

He was an All-American high school football star who, by showing Pete Carroll his talent at Long Beach high, he was able to procure a full-ride scholarship at USC and was to attend in the fall after graduation. Well, that is until he made one bad decision and his world turned upside down. At age sixteen, Brian mostly thought of football, but girls would creep into his mind, of course, particularly Kennisha. The mistake he made that sent him to prison was that he had a make-out session with her. When she alone is caught, she’s faced with whether saying she was with a boy willingly or not. Knowing she’d get in trouble and have to face her ruthless mother, said she was dragged there and made up a story of how Brian forced her there against her will. This lie ruined this young man’s future and took from him all of his dreams. The lawyer assigned to his case, instead of helping him, hurt him. She has him plead guilty, promising he’d get parole and all of this behind him. Without doing any sort of research on Brian, witnesses or the supposed crime scene, he’s railroaded and prosecuted for rape. The judge sentences him to six years in prison and several more years on parole. While in prison, he meets his personal guru who mentally helped him release the negativity of the ‘he said/she said’ conviction that was eating him alive. They’re still friends to this day.

Once he’s released, he feels as if he’s still inside. With restrictions, he may as well be. His parole officer informs him of what he can and cannot do which all but ensures his failure when he tries to get a job. He must do something. He tries to reach Justin Brooks (Kinnear) who works the California Innocence Project. After several rejections, his loving and supportive mother (Shepherd) gives him the advice to stop telling him about the case and instead, tell him about Brian Banks the person and what he lost. This works. Justin agrees to meet with him, but he tells him the bad news that the only way to overturn a conviction and clear his name is if new evidence is brought forward. Brian gets some but it’s still not good enough because of the rules. Brian finds that since people ultimately interpret the law, you’re not innocent until proven guilty but the other way around. Truth doesn’t seem to matter. It seems the deck is stacked against you whether you’re innocent or not. With the help of the original ‘victim’ in the case, Justin sets out to get a confession of Brian’s innocence. Very competent and well-versed actors bring the story to a close to which you may have to hold back the tears, at the very least, your applause.

*Stay at the end and you’ll get to see and read about the real Brian Banks and Justin Brooks.