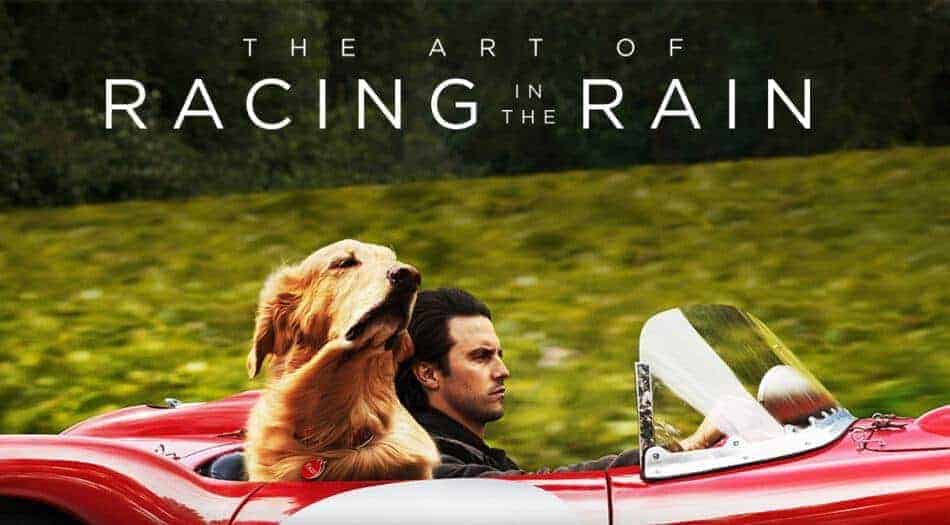 “The Art of Racing in the Rain” is based on a book of the same name. However, in this adaptation everyone involved is all wet. The story of a professional race driver, and the loves of his life, is told through the eyes of his trusted canine companion (named Enzo). But the story never rises above a weak melodrama with unoriginal plot points. The production values are fine, but the acting effort is sub-par. There is a nagging feeling that most of the people involved wished they were someplace else. The dog in question, Enzo, is a beautiful golden lab that moves with grace and purpose. The voice behind Enzo does not fulfill the promise of what this animal was supposed to be on screen.

Denny Swift (Milo Ventimiglia) is a racer, who has an appropriate name (he is Swift, ya get it?). Denny has a dog named Enzo (voiced by Kevin Costner). The name Enzo comes from Ferrari – so he must mean a lot to Denny. The story starts as Enzo has lived a full life and has many stories to tell about Denny. Enzo starts telling the story, beginning when Denny first found Enzo as a small puppy. Enzo, even when he is very small, still has the voice of a full-grown mature actor. And it seems like the voice of a very bored, uninterested actor. So, Denny and Enzo bond over the love of Formula One racing and the sights and sounds and smells of the track. How a dog can understand the activities of a car race are not made clear. But Enzo knows that he is a special dog that will someday be reincarnated as a real person. That is why he is getting all the information that he can about life. Denny takes Enzo down to the race track, which is owned by his friend Don (Gary Cole).

Denny meets a woman named Eve (Amanda Seyfried) and they fall in love. Enzo is not that happy about this, because he thinks it will take away from his time being Denny’s true friend. Eve has her parents who really look down on Denny. Max (Martin Donovan) and Trish (Kathy Baker) do not think that Denny can ever rise to the level that they think that their daughter ought to have in her life. After all, he is only a race car driver, and he takes too many risks. But Eve and Denny get married, and soon have a little baby girl. Denny is very happy, because Eve and the baby mean so much to him. Plus, he still can drive and loves to take Enzo out to track when he can. Enzo is recalling all these events and narrating the story as it unfolds. Then there is little glitch in the works…

Enzo the power to smell cancer (for some reason), but he is unable to tell Eve. Eve gets very ill and eventually dies. Denny is left to take care of their child, and that’s when the nasty in-laws take Denny to court. He is unfit to care for their precious grandchild – because Denny is on the road (so to speak) as a race car driver. He takes risks with his life and cannot be a good role model without a steady job. Denny is devastated with the loss of Eve, and now his in-laws have it out for him. After a scuffle with his father-in-law Max, Denny is arrested and now could lose custody. Everything gets worse and worse for Denny, and he even gets a scare when Enzo is hit by a car. What other troubles can befall Denny? What other dilemmas can come his way?

Throughout the whole movie, there are little sly statements about how racing can influence how you live your life. You need to know that ‘the race may not be won in the last stretch, but it might be lost in the first turn’. Or the secret of racing on wet pavement is ‘turning into a skid when rounding a corner and use the rain to your advantage’. Plus, the advice to ‘ignore the walls, and aim your car into the distance – where to want to go’. This is supposed to show that Denny is an expert driver and really knows his stuff. But mostly it sounds like silly ways to make his driving ability the major focus of his life. Mostly, it is Enzo saying these things – and it is much more awkward to hear these ‘profound truths of life’ coming from a dog.

Speaking of awkward, the ‘voice’ of Enzo is coming from Kevin Costner. But his delivery is so flat and uninspired that Costner sounds like he is bored out of his mind. There is no inflection, no spirit, there is no little dose of energy in this voice-over. It is a minimum effort to read the words, and the words are unusually flowery and over-the-top. It resembles a college professor, or even a script-writer, coming up with the biggest flourish ever for each sentence. Every other actor is also caught in a side current in the main flow of this movie. Nobody seems to get a good grasp on what the role that they play is supposed to be. Milo Ventimiglia is somewhat charming, but his character really goes nowhere. For being a race car driver, he never seems to pick up any speed.

The Art of Racing in the Rain