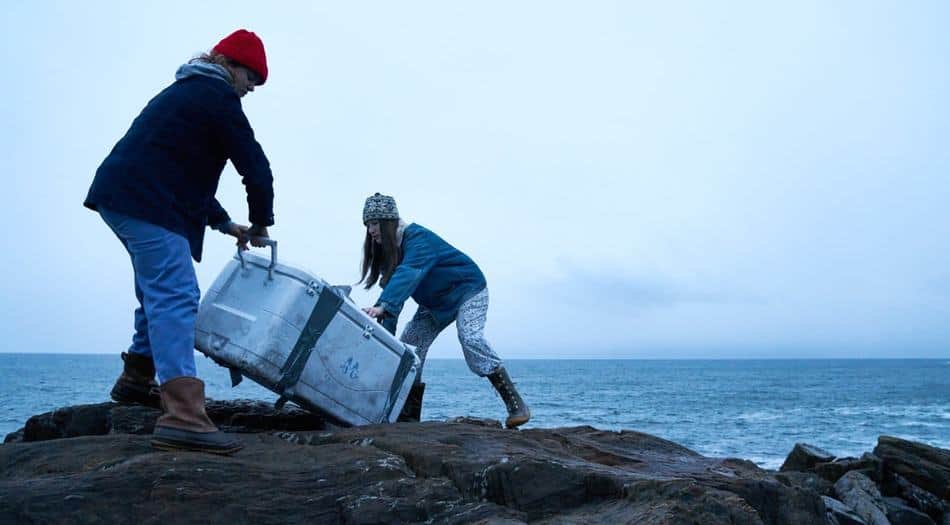 In Maine, there’s a little fishing town called Easter Cove. It turns out the tiny town holds many secrets; secrets that the young, teenage Mary Beth (Sophie Lowe) and Priscilla Connolly (Morgan Saylor) are about to discover.
The death of their mother, Mary Margaret, leaves them in a precarious position financially, which matches how they feel emotionally. The young women argue and fight, but luckily, they come together as family members should, when they need one another the most. Due to the fact that the town survives on its fishing revenue, almost everyone has a hand in fishing. The men go out to sea, and the women stay on land to prepare it, package it and sell it. But that’s not all they’re selling. More on that later.

Priscilla is a bit prim and prissy. She takes care of the house and fishing shop that their mother willed to them, and she worries. The wild and somewhat Naïve, Mary Beth is happy to let her sister take care of everything, leaving her with zero responsibilities. In fact, she wants to go out and have fun, preferably in another town. Mary Beth would like to disappear forever, if possible. One of her favorite pastimes is drinking, so she goes to the bar and runs into Gorski (Ebon Moss-Bachrach), who works for Enid (Margo Martindale). He seems like a fun-loving guy. She ends up behind the wheel of his car.

At this point, they’re significantly inebriated. She ends up crashing his vehicle and, without giving too much away, things spiral out of control. After finding herself unable to handle what has happened to her, Mary Beth runs straight to her sister for help. Fighting or not, they have a special bond, so Priscilla jumps in immediately to aid her sister in any way she needs. While attempting to get the situation resolved, the girls have a run-in with Enid, and information regarding the women of the harbor hamlet emerges.

From the start, the film is dark but more on the dramatic side. From here on out, the tale becomes more like a caper with a splash of the noir genre. The most prominent parts in ‘Blow the Man Down’ were given to females. That feminism vibe was a nice touch, especially with what is eventually exposed.

That being said, what doesn’t make sense to me are the singing fishermen. For some reason, they show up from time to time to belt out a tune that has something to do with the title of the film. Nothing against the crooners, but when they appear, it changes the tone of the film, and not necessarliy for the better.

I’m coming back now to what the girls find out. What was unveiled is that the girls’ mother, and the other female characters, June Squibb and Annette O’Toole’s included, have been involved in, now, or at one time, Enid’s brothel. Yes, I said brothel. Presently, they don’t want anything to do with it; even want it shut down. Enid wants her money.

She’s an evil character, which was nice to see come from Tony-nominated, Martindale. As she turns on the girls, she’s edgy and downright frightening, but she may have finally met her match. If you’d like to find out if she has, watch ‘Blow the Man Down’ starting today on Amazon Prime!

Blow the Man Down

@peepso_user_43438(Kate3) awesome action packed movie. Kept me on the edge of my seat