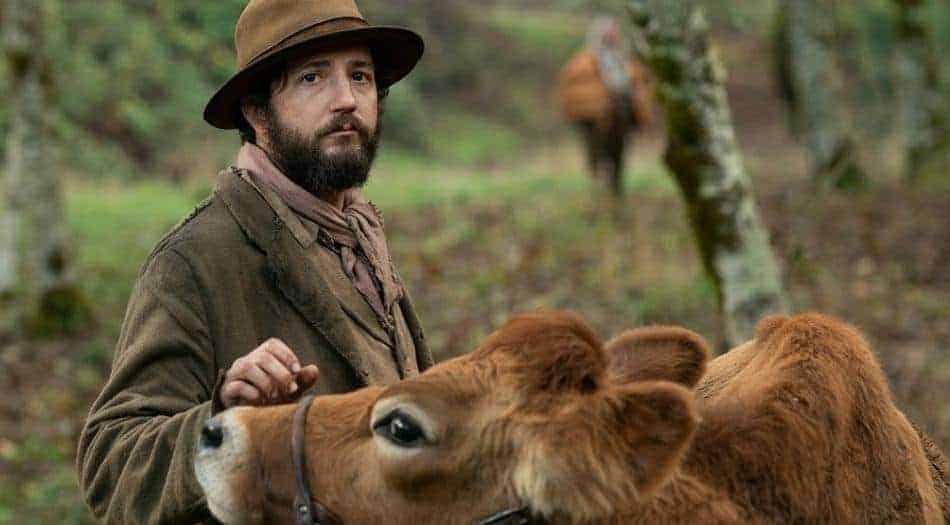 What a fascinating story, a peculiar story that’s much deeper than it appears on the surface. ‘First Cow’ is visually remarkable.

It’s also creative in the lesson in greed that it sends our way and quite a cow friendly treasure. If only it hadn’t been so slow. However, if you don’t let that get in the way, you’re going to add this to your favorite films of 2020, I bet, and it’ll stay that way for the rest of the year.

Director Kelly Reichardt (Certain Women, Night Moves, Wendy and Lucy), uses first-rate foley artist, Leslie Bloome, who has been in the business for thirty years, to tickle your otic sensibilities. Bloome’s skills in concert with Reichardt’s directing style work unbelievably well with cinematographer, Christopher Blauvelt (Speed, Gone in 60 Seconds, Don’t Worry He Won’t Get Far on Foot), to create a symphony of sounds and illusion. Scenes are so spectacular to observe that stills of Blauvelt and Reichardt’s images alone belong hanging on a museum wall. They are very specific and sweeping. Don’t miss this if you’re an artist of any kind.

The music also draws you in. It has you curious and eager to experience what the film has to offer, which promises to be something most unusual, based on the trailer. At first, we see a woman and her dog that has just unearthed some human bones in her master’s yard. What do we have here? There’s not only one skeleton, but two.

Based on the next shot of someone picking mushrooms, you’re acutely aware of the fact that this is the same place, more or less, but at a different time. What you learn is that the hands belong to Cookie Figowitz, performed by John Magaro (Carol, The Big Short and The Finest Hours), an indentured servant out of Boston, who’s a skilled cook on his way to make a new life in the Oregon territory. People are still rather simple, and there’s a pecking order where Cookie fits comfortably at the bottom. Cookie would never think of moving up in status, but that was before. That changes some when he meets a Chinese immigrant named King Lu, who he helps escape trouble. King, portrayed by the magnetic Orion Lee (Skyfall, Star Wars: Episode VIII – The Last Jedi), is on the run from Russians who want to kill him for killing their buddy. Before King came into his life, Cookie just wanted to live freely and somewhat more comfortably. The two seem to like one another right away but separate before reaching the fort. A little while later, they come to meet up again, and King invites Cookie to stay at his small farm. Long continuous shots of the men cleaning, taking care of the animals and finding meals to fix, gives you an idea of what life was like back then. Rather than enjoying themselves, they seem to always be in preparation mode.

An opportunity presents itself when a cow, owned by Chief Factor, who’s played by actor Toby Jones of ‘Frost/Nixon,’ ‘My Week with Marilyn’ and the ‘The Hunger Games,’ is brought to his farm. When Cookie sees the beautiful brown bovine, he dreams of being able to bake with the milk he could get from her. What King sees is a chance to sell baked goods. They hatch out a plan to steal some milk. With King as lookout, Cookie milks the darling girl. He pets her, tells her she has a nice place, and he thanks her for what she’s giving him. It’s a sweet moment.

King gets a taste of the first batch of Oily Cakes that Cookie makes and knows they’ll make a fortune selling them in town. They set up in the street, and their sweet delights go like, well, like hotcakes.

But the duo is aware that by stealing the milk, they’re, ‘playing a dangerous game.’ After selling their treats for an extended period of time, they have an abundance of money saved up. They’ve agreed they want to move to another town and eventually buy a legitimate business together. Knowing that the chief could find out about his cow being milked at any time, perhaps they should stop? This is a decision not quickly agreed upon and what finally tests their friendship.

That’s all you need to know going in. Sure, the film has some extra time on it for illustrative purposes and does the job nicely. If you’re worried about that, the pace picks up nicely about halfway through, so don’t let the length scare you away from watching this charitable and generous example of true friendship.