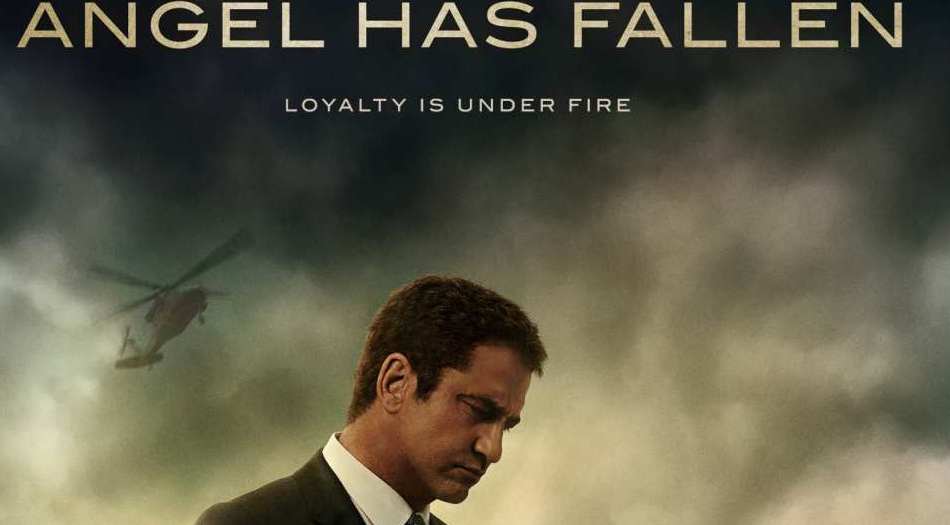 “Angel Has Fallen” is a new entry in the series starring Gerard Butler as a Secret Service agent. The stunt action is non-stop crazy, and the ammo is in endless supply. So, it is another action-based shoot-em-up where the plot borders between easily predictable and predictably easy. The previous movies has seen ‘Olympus’ falling, and then ‘London’ falling. Now, the ‘Angel’ is Butler’s character – who has been set-up as a patsy for an assassination attempt. But with Butler as the guy in distress, you know that he is going to fight back, and he will fight back hard. There are bad guys galore to kill, and Butler goes right at ’em.

Secret Service agent Mike Banning (Gerard Butler) has seen his share of major incidents. He was there when terrorists attacked the White House, and he saved the President. He was there in London, when terrorists attacked the city, and he saved the President. Again. So, he wants to relax now with this wife Leah (Piper Perabo) and the new baby. But the agency Director David Gentry (Lance Reddick) will be retiring soon. And now President Allan Trumbull (Morgan Freeman) is looking to have Banning take his place. The action and trauma have taken a toll on Banning, so this might be a good option. He visits an old Army friend named Wade Jennings (Danny Huston) – who is now heading a para-military contracting firm. They meet up and Jennings wants Banning to convince the President to approve of a new contract for company that Jennings runs.

Soon after that, President Trumbull goes out on a fishing trip out in the wild. Banning is heading up the Secret Service detail to protect Trumbull. But there is an attack that leaves everyone dead except for the President and Banning. Vice President Kirby (Tim Blake Nelson) takes control as Acting Prez. The FBI investigate, and find some details that point to Banning as the mastermind. Agent Thompson (Jada Pinkett Smith) is brought in to get deep into the background of Banning. Banning is put under arrest for planning the attack and attempted murder of his old friend. President Trumbull is alive, but in a coma – so he cannot help Banning resolve his issues.

Banning is taken by a security convoy, which is of course attacked by the same shadowy group that did the drone attack against the President and the agents. All hell breaks loose, as Banning manages to kill the attackers and get away. He is a fugitive on the run, stealing cars and trucks to get around. He even manages to steal a full semi-tractor trailer rig. Which he knows how to drive – because he is a Secret Service agent who knows everything? It sure is a good thing that there enough plot holes big enough to drive a semi right though them – because now Banning has gotten one of those, too… But he eventually makes his way to see a grizzled old loner who lives like a hermit out in the woods.

Banning has found his estranged father, Clay Banning (Nick Nolte). This guy is so ‘off the grid’ that just so happens to have high-tech cameras in the trees and a few extra pounds of C4 explosives placed in convenient places. When Banning’s old friend Jennings sends another shadowy group of killers out to get Banning back and kill anyone who gets in the way. Clay will have none of that, because he has the woods wired for sound – the sound of KA-BOOM. The Bannings both make it out of there and head back to the hospital where the President is being held. Agent Thompson sees that there might be an odd connection to the Presidential attack the company that Jennings is running. She goes out to make an on-site visit to question Jennings, but it does not end well.

Banning needs to get into the hospital and make it to the room where they are treating President Trumbull. But that would be impossible. Unless your name is Mike Banning. Banning finds a way to again save the President, and he has a face-off between him and Wade Jennings. Oh, and just like in ‘The Dark Knight’, a hospital wing blows up and numerous other casualties occur. But ya gotta do what you need to do, in order to protect the President, right? As long the ammo supply does not run out, and the explosions are big and loud – that must mean that the Good Guy is winning. If there are obsticles in the way for Mike Banning, he will just reload and take aim…

Look, this is not Shakespeare level of writing – and the plot has lent some of the extra holes over to a chunk of Swiss cheese. But it makes for a big load of dumb fun to see a lot of action and shooting and things blowing up. Gerard Butler can be a very talented action hero, and this is the role that makes it possible. He is full of energy and gusto, even when his character looks to be weak and suffering. Morgan Freeman plays a steady-handed leader, but has most of the movie in a coma. Nick Nolte has the look of the Unibomber, and cunning of a trapped cat. He finds a way out of anything, with enough things that go boom. Danny Huston is good playing the heartless old friend of Banning who would rather throw his friend under a bus – if it would get him a contract.

If you like your late summer entertainment full of action and not burdened down with logic, then “Angel Has Fallen” will be the perfect pick-me-up…