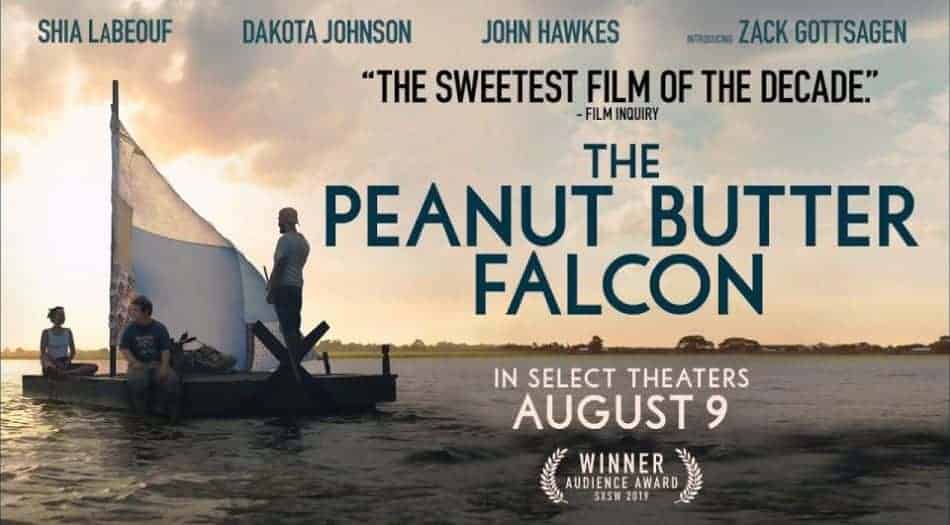 “The Peanut Butter Falcon” has created its own unique niche in movie history. It takes on a story that presents a young guy who goes on adventure. That part is not unique. But the fact that the young fellow is affected with Down’s Syndrome makes it unusual. Further making it unique is the fact that the actor who portrays that young man has Down’s Syndrome — well, that part does not happen too often. Combine that with the overall upbeat tone of the movie, and it makes for a fun way to get this particular story told. There is a daring escape, and there is an adventurous road and rafting trip, there is a new friend made along the way, and there is the final payoff. The young man gets to meet his hero, an old and out-of-shape Professional Wrestling Champion. Did I mention this movie has a unique niche in movie history?

There is a young guy named Zak (Zack Gottsagen) who has been taken in by a state-run retirement home down in the South. Zak’s family has nothing to do with him, due to his Down’s Syndrome condition. That does not stop Zak from getting the best out of his life. He spends his days watching old VCR tapes about a Champion Wrestler who calls himself ‘The Salt Water Redneck’. Zak’s roommate Carl (Bruce Dern) puts up with Zak, but he complains that Zak plays that damn tape too many times. Carl complains to the social worker named Eleanor (Dakota Johnson).  She understands, but Zak is just so sweet that nobody in the place does not like him. Zak thinks he would be much better out on his own, so makes a deal with Carl. If Carl can help Zak escape from the bars in the window at this prison of an old-folks home, then Carl will not have to listen to that damn tape.

Carl does help him, and Zak is now free. Wearing only his shorts, he runs in the cover of the night down to the docks. He sees a guy getting into trouble. That guy is named Tyler (Shia LaBeouf) and he also is another guy without any family and with no direction in his life. Tyler had pulled up some crab pots and tried to sell the crabs. But the crab pot owner Duncan (John Hawkes) found out and has it in for Tyler. He will hunt Tyler down and force him to repay. Tyler burned all of Duncan’s crab pots, and now Tyler is wanted by the law. Tyler escapes in a boat, but he does not know that he also has a stowaway. Zak is hiding and gets motion sickness. That almost lets Duncan know where Tyler is hiding, but the two of them get away. Tyler is trouble, and Zak is in trouble – but for different things. Zak tells Tyler his grand plan. He wants to find ‘The Salt Water Redneck’, because this Wrestler has a Wrestling School.

Eleanor is given the job to hunt down and locate Zak, before the state knows that he has escaped. Her boss wants her to get out and search high and low. Because how many young guys wearing only shorts who have Down’s Syndrome and a mad obsession with Wrestling can there be out on their own? She goes to look for Zak but does not know that Tyler and Zak are now travelling together. They travel on foot at first. Then later they travel using a raft. They do the Huckleberry Finn mode of travel, going in and out of many of the bayous and bays. Duncan is still hunting them down. Also, Eleanor is hot on the trail of the two fugitives…

Zak knows that ‘The Salt Water Redneck’ is out there. But he does not know that that fellow, named Chris (Thomas Haden Church) had given up Wrestling many years ago. Eleanor is able to catch up with Tyler and Zak about the same time that they find Chris.  Chris is confused why anyone would come to his place for Wrestling School. He gave that up years ago. Of course, Zak only had an old VCR tape from many years ago – and he did not know that ‘The Salt Water Redneck’ was not a thing anymore. Chris says what the heck – he dons his out outfit and decides to give Zak the experience that he deserves.  After all, Zak is just so sweet that nobody in the place does not like him.

“The Peanut Butter Falcon” makes a tasty treat for anyone who is ready to shed the cynical nature of the world. When you can see the good things in life through the eyes of Zack Gottsagen, it makes for a pleasing movie meal. Zack takes the fictional potrayal of his character Zak and makes him a hero you can root for. And just like peanut butter, he spreads out his amazing likability over everyone else in the movie. Shia LaBeouf can sometimes be a distracting actor in a movie, but here he hums along perfectly. He is down-on-luck and not in best of shape mentally (both Tyler and Shia). But this time that Tyler spends with Zak gives him a center back into his life. Dakota Johnson is very nice to have in the show, but her character is not as strong as the two main guys. She is a good sport and joins them on the journey.