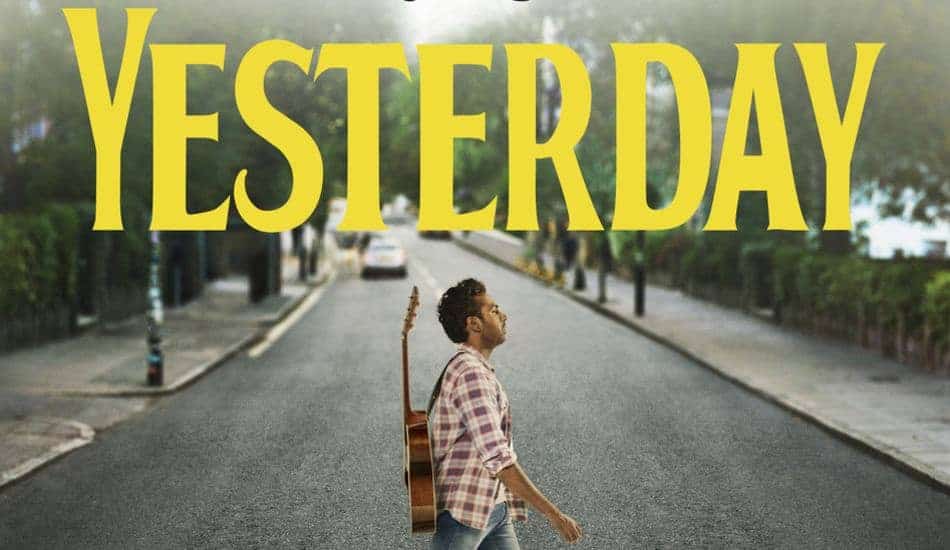 ‘Yesterday’ is from the writer Richard Curtis who has written several movies I treasure, such as ‘Four Weddings and a Funeral,’ ‘Notting Hill,’ ‘Love Actually’ and ‘Bridget Jones Diary.’ Because of his involvement, I couldn’t wait to see this film. ‘Yesterday’ is about a man waking up and suddenly realizing The Beatles don’t exist and the audience realizing, to quote the film, ‘A world without the Beatles is a world that’s infinitely worse.’ The film knows it, you know it, I know it so, an interesting theme to play with, no? Well… no. ‘Yesterday’ is kind of charming but other than that it disappoints. It starts off agonizingly slow, begins evolving into something palatable but dies out before becoming what was promised.

Our main character, Jack Malik (Patel) works a Costco type job at Price Star but his passion is singing and songwriting. His manager, who gets him jobs singing in local bars, is his friend from elementary school, Ellie Appleton (James). She’s been his best friend whilst supported him his whole life. We meet these two just as buddy’s and have no reason to believe that either one of them would be interested in taking it to a level beyond that. She gets him paying gigs and that’s that. He’s happy that he’s singing but his career hasn’t advanced beyond these small engagements. Ellie encourages him by telling him miracles can happen. He inquires as to when she has seen one and she offers the fact that Benedict Cumberbatch became a sex symbol proves it.

Then one night while Jack is on his bike, the power goes out around the globe for twelve seconds, during which, he gets hit by a bus. After he recovers, he discovers there are a few things missing. Two of his front teeth for one, which his friends prod him about every chance they get. Another that’s pointed out is the fact that Coca-Cola has never been developed. The drink that started it all. He finds other items that have disappeared, too, which is a running gag throughout the film. You’ll like the list of missing items, most spectacularly, the main focus of the story. The Beatles never got together to make their stirring and powerful music. My mind began to wander. If Coke wasn’t invented, anything Coke inspired would be missing, too. Meaning, no Pepsi. Anyone the Beatles inspired would be gone, too, right? At least, certain songs would be. Anyway, for a struggling singer-songwriter, this could be the miracle break. All he has to do is remember the music and the lyrics to their songs and they’re now his. As luck would have it, except for a few tunes, Jack knows their entire catalog. When he sings the song ‘Yesterday’ to his friends, they sit up and take notice, particularly Ellie. She seems tuned into him, too.

The well-known musician Ed Sheeran lives locally and has heard him, too. News travels fast in small towns. He approaches Jack about being his opening act on the road. Of course, Jack agrees. The first show is in Moscow where Jack has a booming night with ‘Back in the U.S.S.R.’ Quickly after, social media blows up over this new music god. Ed Sheeran, who is quite funny in the film, gets a bit jealous, telling Jack, ‘You’re definitely Mozart and I’m definitely Salieri.’ Sheeran is important to the movie is what he is. He has an everyman quality about him that says if he can be accepted, Jack can be, too. Since Jack is anything but confident in himself, you believe that Sheeran may have once encountered this struggle and see a message established. However, Jack is sure of these songs and no stage is too big for him while he’s singing them. Enter Kate McKinnon, a ruthless and cold manager who doesn’t much care for Jack but sees the new house she can purchase through this new product if she signs him. As is the case most times, she’s gold. You can’t get enough of her.

I want to tell you more but can’t go into detail without revealing too much. I’ll add that something extremely touching occurs toward the end. This could have made a big difference in the overall tone of the film had it been done correctly. I must report how the scene is handled here, as much of the film, simply misses the mark. In fact, the entire film feels as if the writers, producers and director, Danny Boyle, may have had disagreements throughout the entire process of making ‘Yesterday.’ Perhaps on which road to take to story, the more comedic or more romantic? They took a gamble on their attempt of blending the two but because of the setup and the lack of chemistry between Patel and James (there’s zero), it’s my opinion they overplayed their hand.

It’s fair to say that this could be studied as an example of the importance of casting. To close, it takes a lot of work for you to ignore the obvious missteps that were made. In doing so, you find a sweet story worth checking out if you have nothing else to do and only for a matinee price. Just ignore the clichés and try to move beyond the lyrics to some of the songs that wouldn’t go over today. Instead, think of how incredibly accomplished Patel is singing them, and you’ll enjoy yourself. It is unfortunate to announce this, but you won’t like ‘Yesterday’ as much as its clever premise would lead you to believe you will.

@peepso_user_46589(dodgeOrBURN) I LOVED Yesterday. It is a sweet, funny and clever film. It had me laughing and crying all the way through. Mostly laughing 🙂 In a time where dark films have the prestige and success at the box office, Yesterday will have you singing along and feeling great about the beauty of music in life. I look forward to seeing it again!
1 person likes this

@peepso_user_45675(ShariK.Green) I love your comment. Maybe I'll watch it again with a fresh perspective. 😉