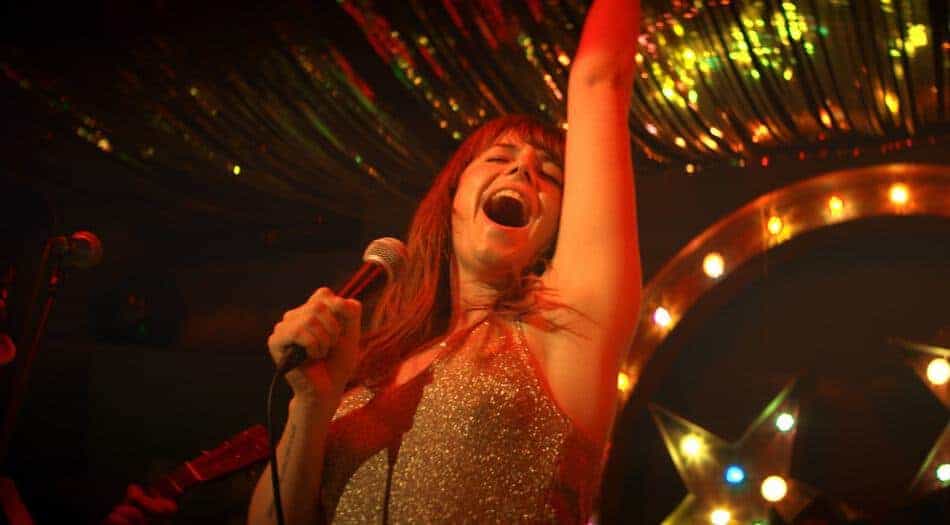 ‘Wild Rose’ grabs you right away with its intense opening song which introduces you to Rose-Lynn (Buckley), our protagonist, and her plight. Rose has been the singer at a bar named Glasgow’s Grand Ole Opry since she was fourteen. She’s had dreams of singing at the real one ever since. When we meet Rose, she’s getting out of prison where she’s been for a year due to an issue with the drug heroin. Though she hasn’t been on stage in a long time, she still dreams of going to Nashville and hitting it big. She just needs that lucky break. She needs money to get there. She needs to not have the two kids she has. Her mother, Marion (Walters) has been watching her two young children who aren’t comfortable around her and who Rose barely knows. Rose has a beautiful singing voice and knows she has something special. If she doesn’t get help to fulfill her dreams, who is she? There’s a lot stacked against Rose. Can she make her dreams come true? At the moment, her goal is nearly impossible to reach. It gets even harder when she goes to the bar to get her old job back and she’s turned away. She’s no longer needed there.

She gets a job cleaning a large house for a wealthy family. She loves being enveloped in the beautiful surroundings, believing one day she’ll live in the same manner. She gets to know Susannah (Okonedo), the woman who owns the house, by talking country music with her and eventually singing for her. She tells her of her desire to get to Nashville for which Susannah quickly becomes her biggest advocate. However, while she’s off trying to get her life started, her children are without a mother. Marion decides that Rose needs to grow up and face the fact that they exist. She stops helping, leaving her daughter to take some responsibility. As Marion was long ago, Rose is on her own to house, clothe and care for her family, something that up until now she has been pretending she didn’t have. Susannah makes a video of Rose singing, the video is seen, and people are interested. Now it’s up to Rose to make something happen with her life… or will she realize that her life is in the two little faces who stare up at her as she tucks them in at night? All she can do is sing, she doesn’t even play an instrument. Is that enough talent to fly from Glasgow Scotland to Nashville, Tennessee with only the hope of making it?

There are some incredibly touching moments in ‘Wild Rose.’ It’s not great but it’s not a bad script. It’ll be accepted by anyone who has ever fantasized about being in the music or entertainment industry. In fact, anyone can relate to it. Her character can be kind of hard to take, she has no filter, and her accent too thick to understand, but Buckley has great chemistry with Walters. Their scenes together are what sells this film. You’d think they were mother and daughter in real life. I enjoyed the music, especially the song at the end called ‘Glasglow.’ As Rose sings it, there’s a lot of power and emotion in Buckley’s performance. Tears stream down her face because she isn’t just singing a country song. She’s singing her song. The one she wrote and that makes all the difference. A loving gesture by her mother, who refused to give up on her, puts her on stage singing the song. The bond they have ends up being stronger than a mere lesson Marion wanted to teach her. This mother and daughter love story is one I hope you see soon.