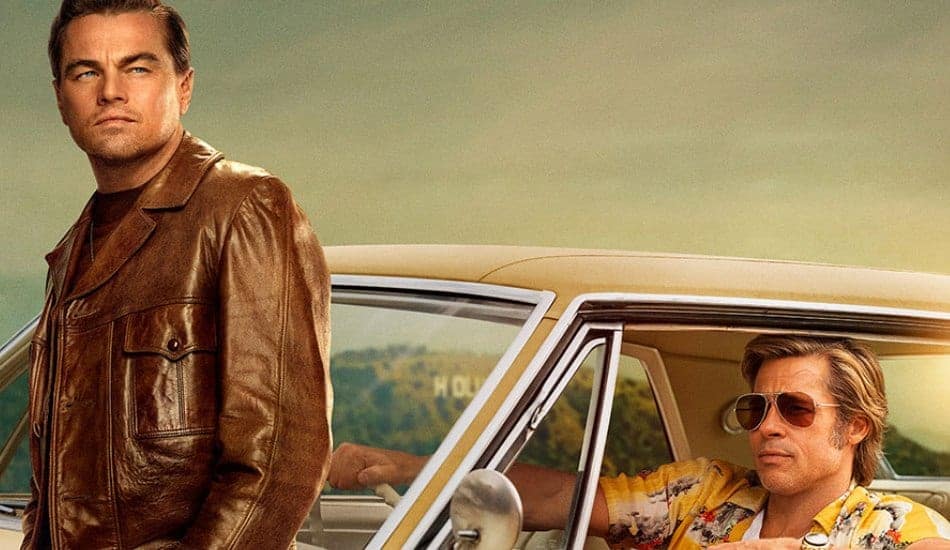 “Once Upon a Time in Hollywood” wants to show people that this world belongs to Quentin Tarantino, and we are all just living in it. His writing takes the direction to glamorize the glamour capital of the world, Hollywood. His direction takes liberties with our recollection of history, and makes up new facts. But with such a talented cast and crew, the long journey into the year 1969 takes us on a slow and steady discovery of the Tarantino World. This is the world as he would want it to be, not exactly as recent past history shows it. This alternative world is full of interesting characters, and some potential dangers. Fictional character live along-side real people that we have known and the results can be mixed.

A fading TV star named Rick Dalton (Leonardo DiCaprio) lives in the luxury of his past success. His best friend is Cliff Booth (Brad Pitt) who worked as Rick’s stunt double years ago when Rick started in a TV Western series call ‘Bounty Law’. But the glory days are over, and Rick’s dwindling roles are coming and going quickly. After a couple of tough-guy movies, Rick has settled down to guest star on newer TV shows as a bad guy for one episode. Cliff is pretty much unemployed, except for getting limited stunt work with help from Rick.  Cliff also acts as Rick’s driver and handyman/gopher – just to get food on his table and canned slop for his dog. Cliff lives in a little trailer behind a drive-in, while Rick’s house is up in the Hollywood hills.

Rick finds out that a new neighbor has moved in next door. It is a rising young actress Sharon Tate (Margot Robbie) and her French director husband. Rick also meets up with a agent named Marvin Schwarzs (Al Pacino) who is working to get Rick some work over to Italy starring in spaghetti Westerns. Rick seems to turn up his nose to that, but his guest role in a new TV show is not going well. Rick gets Cliff on the set to do some stunt work. The Stunt directors are uneasy to work with Cliff, because he is known to be hot-headed and difficult to work with. He might have killed his wife years ago, but that was a different story. Cliff does OK, until gets into a fight with the co-star of the new TV show “Green Hornet”. Cliff winds up fighting Bruce Lee (Mike Moh). They kick Cliff off the set and later he picks up a young girl hitch-hiking.

She calls herself Pussycat (Margaret Qualley) and she wants a ride out to George Spahn’s Movie Ranch. Cliff and Rick used to shoot many episodes of ‘Bounty Law’ at the Ranch. Cliff knows George Spahn (Bruce Dern) and wants to make sure he is doing OK. There are a large group of ‘hippies’ who have taken over the Ranch, and they are led by some crazy-eyed guy named Charlie (as in Manson). Cliff talks to Spahn and figures out that the guy has lost it since the old days of the Movie Ranch. The hippies are running the asylum, and the cult leader is making them do weird things. It is going to build up to frantic finale that everyone knows how it shook out, about 50 years ago.

But then, in the Tarantino World, everything can be flipped in different direction. The tragic parts of the real story can be revised and edited and put into a new perspective. All it takes is a couple of fictional characters who live next door to the real-life characters. The ending result can much less dangerous for the people around Tate, and much less successful for the mind-numbed hippie murder crew. But that is how Quentin Tarantino can spin this outcome. After all, this is Tarantino’s World…

This movie may not follow the lead of many other Tarantino movies. There is much less bloody gore and excessive violence (well, for the most part). There is a slow and steady rhythm to the story of Rick and Cliff – and some may even call it boring. But the accolades must go out to the man who has brought Leonardo DiCaprio and Brad Pitt to star in a movie together for the first time. Margot Robbie has a difficult role playing a true life person associated with a tragic end, but makes her performance light and airy. There is a huge list of great actors who show up in scenes and deliver their roles with a lot of heart and emotion.

Tarantino World is back to show some honest respect for the Hollywood of old. But it is also there to bring together two of today’s biggest stars. The result is not this writer/director’s very best work. But even a less-than-perfect effort from Tarantino is way better then many of the super-sequel mega-peats that normally clog the theaters. You know all those other movies that don’t have much respect for Hollywood. They just live there.

Once Upon a Time in Hollywood

MPAA Rating: R for language throughout, some strong graphic violence, drug use, and sexual references