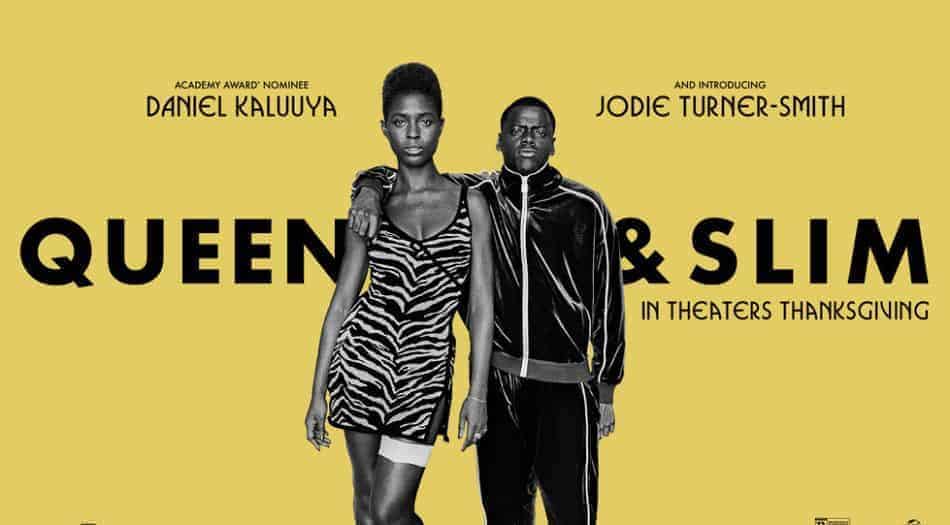 “Queen & Slim” shows that the way criminal justice is approached and doled out in this country is as different as Black and White. The perceptions of crime and injustice become the realities of our lives. Based on social status, and skin tones, these differences are the fuel that power the journey that is this movie. The two main characters are first living ordinary lives. But when an aggressive police incident creates a struggle for freedom, these two outlaws hit the road for a new chance to live free — or die.

For a first date, the two (unnamed until the end of the movie) people struggle to connect in a dinner. The woman – later known as Queen (Jodie Turner-Smith) is not getting along with her Tinder date – later known as Slim (Daniel Kaluuya).  She is strict and structured, a lawyer for the underclass who often sees her clients get the death penalty. He is an easy-going, and church-going, retail clerk who has close ties to his family and his God. She does not believe, and he would not know how to cope without believing. They end the dinner and he is driving her back home. But Cleveland’s finest decide to stop his car for minor violations. The police encounter escalates, and the (probably racist) cop pulls a gun on Slim.

But tempers get out of control, Queen is wounded — and after a fist-fight — the cop is dying at the side of the road. Queen and Slim know that even self-defense would not prevent Slim from being a new death-row inmate. So they run — from Ohio down to the South, so that Queen can make a stop to get some help from her uncle. But midway down into Kentucky, Slim remembers that he forgot to fill the tank. Out of gas at the side of the road, Queen and Slim find that a friendly cowboy hat wearing, pick-up truck driving good-old-boy will help them. Until he is found to be on the other side from the two outlaws. They take the truck and get moving on down the road. A few Black people that they meet seem to know who they are. After all – the news coverage is plastered everywhere. Cop Killers on the Loose!

Queen and Slim make to New Orleans to visit her Uncle Earl (Bokeem Woodbine). He runs a low-level brothel out of his house, and at first, he wants nothing to do with these two on the lam. But Queen reminds him of his debt – and reluctantly he agrees to get them a different car, new clothes, some cash – and just a place to rest.  Queen later explains the complicated relationship with her Uncle Earl. But the LAW is still on their trail, so they take a light blue Cadillac and get moving again. Uncle Earl was proud to help out the “Black Bonnie and Clyde”, and they begin to see the rising tide of social media and mainstream angst that surround them. They are wanted criminals, yet there is a level of society that is rooting for the underdog couple. They were the ones to ‘Take It To The Man’.

But through the entire ‘on the run from the law’ thing, Queen and Slim start to see that there is an intimate connection between them. The rest of the world seems to be on fire with hatred. But these two are finding love and acceptance. But there are still some miles to go, and other encounters to narrowly avoid. They are on their way to Florida, where a small plane can take them to Cuba. But there are car problems, and a stopover at the home of a white couple (Chloë Sevigny and Flea). And when the cops are tipped off — they barely ‘Get Out’…

“Queen & Slim” touches on some very sensitive subjects. There is police intimidation of Black people for starters. And then it gets into race relations, viral images and how they affect the public, the way that perceptions can/will shape our belief systems. So, there are a ton of heavy messages, just below the surface. But there is a road trip movie and a decent love story mixed in there, also. The movie from last year (“The Hate U Give”) did a similar theme – it took an incident of police violence against Blacks and showed how it divides the community. This movie does that same thing, but with a heavier hand.

This movie would not work without the stellar abilities of the main leads – Daniel Kaluuya and Jodie Turner-Smith. They take a story that spins out beyond their control and shows how it affects a much larger group. Daniel Kaluuya plays a very down-to-earth type who is pushed out into an abyss by something that he could not foresee. His pain and remorse are always in front of his mind – yet he never says it. Jodie Turner-Smith plays a very proud and controlling woman who has the worst day of her life turned into an Internet meme. She is never willing to drop an illusion of stability and control – even when she knows it is all for show.

“Queen & Slim” is an interesting movie to watch, and it raises many different questions about equality in society. But parts of the movie seem to take it a little bit over the edge in terms of ‘Black Power’. But with the performances that overshadow the story, it is at the most basic level a love story. It is just a love story that is wanted in all 48 contiguous states…