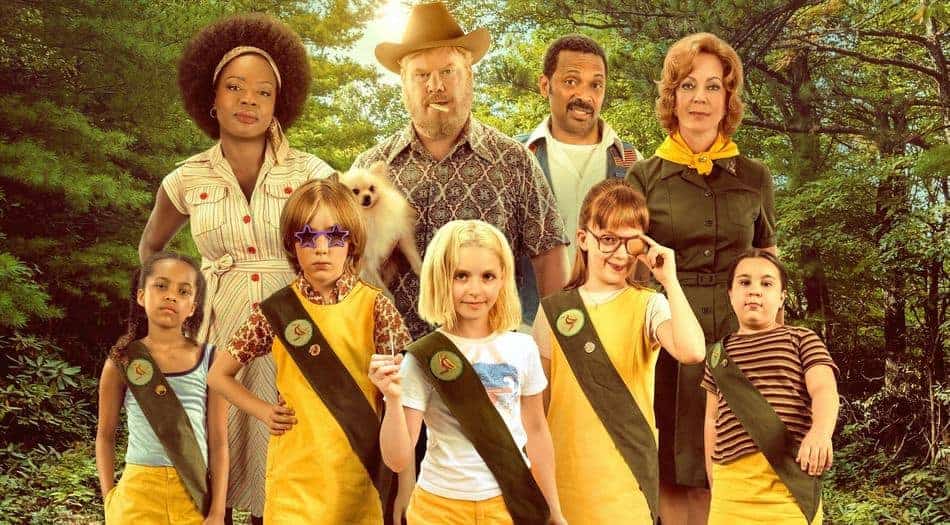 I’m so happy that I sat down to watch this true underdog story. I’ll speak of the child actors by saying that this is an adorable cast that performs sensationally. On set and in the story, they’re put through the ringer and come up with a winner.

The center of the story, Mckenna Grace, plays a lonely little girl named Christmas who recently lost her mother and is having trouble getting over it. Her parents naming her this holiday virtually guaranteed she’d be picked on, which she is constantly. Students even cut her braids off. Kids do this because she’s a bit dirty and a skinny little thing who doesn’t have a lot of self-confidence. Her father Ramsey, played by Jim Gaffigan who got the accent down perfectly, isn’t a lot of help in that department.

He’s a busy lawyer out helping everyone in the community, most of the time without pay. He’s nearly oblivious of the fact that his child lays out and gazes at the stars every night. Her mother believed in aliens and Christmas inherited that belief, clinging to it now that her mother is gone as a connection she doesn’t want to lose. She knows her mother and the aliens are floating amongst the stars and she doesn’t want to miss it when they send her a message, so stargazing is her biggest passion.

‘Troop Zero’ is set in the tiny Wiggly, Georgia in 1977, the accents are thick but there’s not a lot of southern hospitality to be found. Though she has a few friends, Christmas is stuffed in lockers on the regular and the teacher, Miss Massey (Janney), knowing who’s at fault, isn’t there to defend Christmas but instead accuses the girl of bringing it on herself. Miss Massey has her favorites and guess who isn’t one of them.

Christmas and her friend Joseph (Charlie Shotwell) overhear that the Birdie Scout Troop, some of the most wicked bullies around, are about to get the chance to attend a Jamboree and enter a contest. The contest pertains to NASA’s launching of Voyager. It’ll be launched soon and on Voyager will be the ‘Golden Record’ which will be playing a ‘Greetings from Planet Earth’ message. The winning Scout Troop gets to have their voices on that record; their voice launched into space. Christmas wants this more than anything. The girls who pick on her won’t allow her entrance into their troop. What she must do is create her own. Not about to give up, she gathers every misfit and excluded child she can think of. Joseph, though not a girl, joins immediately. When the group starts earning badges, of which they must all have one to be able to attend the Jamboree. Joseph obtains the Beauty Badge.

The last thing the troop needs is a troop mother. Rayleen (Davis) is talked into taking on the task. Her character is fantastic and when she starts getting more involved with the molding this group of kids, she sees that even though no one was there for her, she can take joy in helping them reach their goal. Once they get going, they run into plenty of obstacles along the way. As they overcome those obstacles, and support one another, we also see them blossom. ‘Troop Zero,’ you’ll love why they’re called that, is funny and at the same time touching. It’s a good movie to watch with the family because it’s filled with valuable, positive messages.

*Watch the credits for something special.

This Charming, Delightful Comedy will be Available in over 200 Countries and Territories on
Prime Video Starting on January 17, 2020

About Prime Video
Prime Video is a premium streaming service that offers customers a vast collection of digital videos—all with the ease of finding what they love to watch in one place.