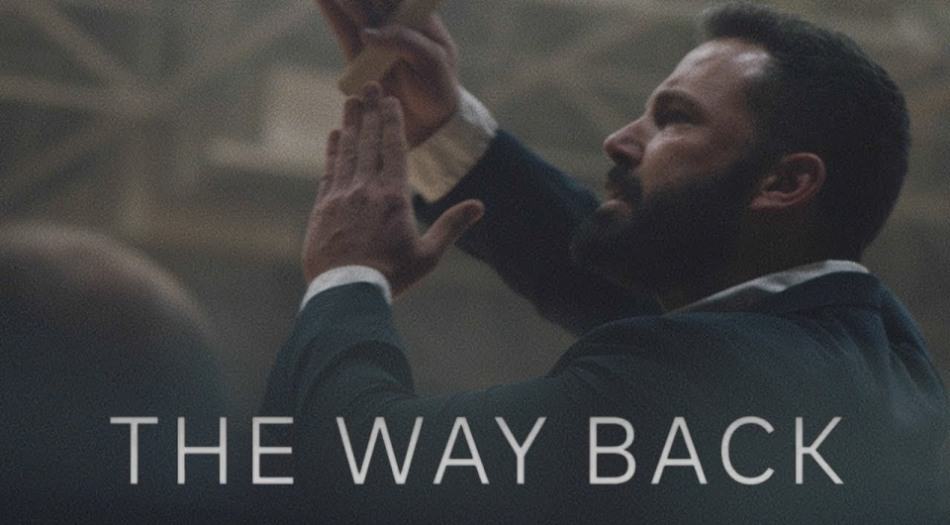 “The Way Back” pretends to be about a struggling high school sports team. But it is actually about a former star player at the school, who has entered a very rough period in his life.

His marriage is dissolving away, and his dependency on alcohol is growing stronger. Recent events have had tragic results, and his outlook is on life is expressed in bitter indifference. But he has a chance to turn things around for the basketball team at his alma matter. But by becoming involved with the team and getting them back on track – he might also find “The Way Back”…

Jack Cunningham (Ben Affleck) is getting by each day as a functional drunk. During each day, he drinks multiple beers in the morning, hard liquor hidden in a cup on the job as a construction worker, and always a long night of shots and brews until he can barely stand. He is separated from his wife Angela (Janina Gavankar) and almost never sees her. He occasionally visits his sister Beth (Michaela Watkins) and her family, so he does not spend much time with anyone. But he gets an odd call from the head of his old parochial high school. The current basketball coach has suffered a heart attack, and they want Jack to come back and be the new Coach. Jack has a thousand reasons to say no – mostly all selfish. But he gives in and takes on the task.

Jack meets the assistant coach named Dan (Al Madrigal), who is a full-time teacher at the school. He meets the squad that he must take over. They are cocky, boisterous bunch. There is little bit of talent, but not much training or drive to succeed. Even at the Catholic school – where the emphasis in on respect and dignity over just winning – Jack spits out a stream of F-Bombs and other choice phrases to get the guys attention. The sports chaplain, Father Whelan (Jeremy Radin), is distraught at the constant language and tells Jack to calm down. Dan also tries to get Jack to focus on the team, and when Jack gets it in gear – he starts to make a difference. Team size and skill are no longer going to be keeping them down. He teaches the kids to play with heart and dedication.

At first, Jack is still gulping down alcohol at an alarming rate. He believes in a Liquid Lunch, as well as a Malt-based Morning, and an Everclear Evening. The team is getting no better and Jack is still swimming in his sorrow. He and his wife broke up over a year ago because of a tragic death in their family. It could not bring them closer, because Jack shut out every emotion and feeling. But after a little while, the basketball team figures out ways to win, based on Jack’s ideas. He was the star of the team the last time his school got into the playoffs. Wouldn’t that be great if that could happen again? The interactions that Jack has with the players and with Dan are starting to soften his hard shell. He stops drinking.

The team has ups and downs in the season, but with Jack’s help they are able to finish strong. They lose a game that could have gotten them into the Playoff round. But the only other chance is a rematch with the biggest and best school squad in the division. It is do or die time, and Jack makes the team members understand what is at stake. They might be small, and they might be somewhat talented – but if they focus on the little things and make every possession count, then they might have a chance. They get that win, and now they are all set for Playoff victories. But what if Jack made some bad choices in the first few weeks, and he had alcohol at the school? What if he had been told his teaching a rough and thuggish style of ball did not match the school’s ‘Code of Conduct’? If all these little things added up, would Jack even have that job when the Playoff games begin?

“The Way Back” gives Ben Affleck a lot of room to show his emotional range, and to display what a talented actor he is. The character has had some rough times, and he has kept the lid screwed down tightly. But the resulting pressure makes Jack drink way too much. Instead of being a better husband to his wife – he closes himself off totally (after their son passes away). Al Madrigal also plays very good in his role, being a math nerd who has made it into the coaching arena. He is bookish and mousey at first but being around Jack gives him some self-confidence. Janina Gavankar is also a fine actress in that role. She makes it clear to Jack that she did not leave him. He was the one who drove her away.

“The Way Back” (this 2020 movie) should not be confused with “The Way Back” (2010 movie) about an escape from a Soviet gulag. Plus, it should also not be confused with The Way, Way Back” (2013 movie) about a boy on vacation in Cape Cod. Please do not confuse this with the ‘Wayback Machine’ – a concept from the old “Mr. Peabody and Sherman” segments, in the “Rocky and Bullwinkle Show”. There might be other things with which you would not want to confuse this movie. If you know of any – then let me know.

@peepso_user_49128(ipaczal) Great movie, with a very personal and inspirational story, told well. Ben Affleck shines in the leading role and gives a very strong and believable performance. The story is somewhat predictable, and it has some obligatory elements from other sport movies, but it has its own voice and own ways as well. It focuses more on tje personal struggles of the protagonist, and less on the coach-team dynamic and the challenges they face during the season. It's definately worth to check out.
2 people like this.

@peepso_user_45175(JMcNaughton) The movie lives or dies with the performance of Ben Affleck, and he hits it out of the park (Opps! Wrong sports metaphor) . But he really does carry the movie, and there are some nice little turns towards the end that shake off the 'standard sports movie' cliches.
1 person likes this