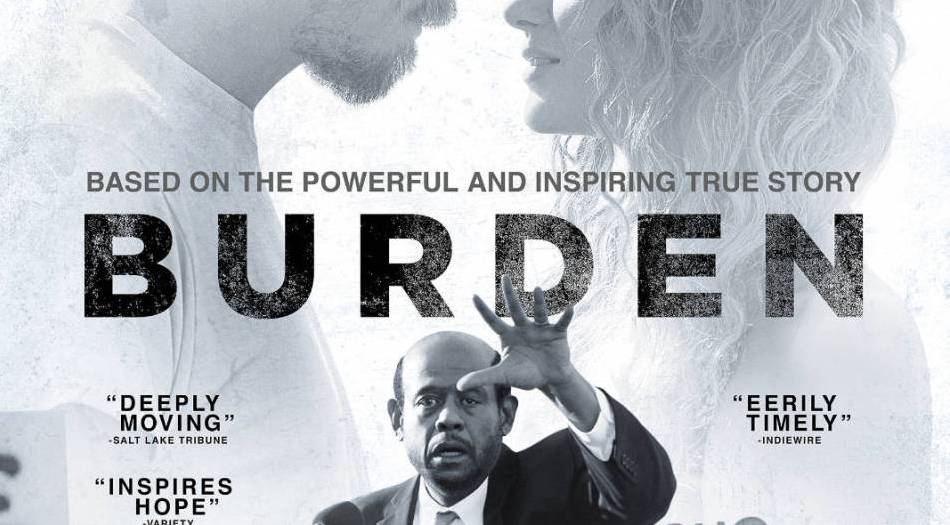 “Burden” follows the life of a ‘good old boy’ Southerner named Mike Burden. Yet, he was not really all that good. He was fully ‘integrated’ into the dark side. He was a Ku Klux Klan member, and a bigoted racist with a chip on his shoulder. He would deliver biting epithets, as well as severe beat-downs, to any person of color. He was raised with these views of hatred and white superiority that ‘colored’ his perceptions about race. Yet, he found that love could creep in like a thief in the night and replace his cold, dark heart with something less vile. His life turned around and he joined forces with a Black minister to end violence in his town.

Mike Burden (Garrett Hedlund) was abandoned as a child and raised by a local couple in the small Alabama town. Being raised by Tom Griffin (Tom Wilkinson) and his wife Hazel (Tess Harper) seemed fine at the time. Mike did not understand that Griffin was the head of the local KKK, and Mike was indoctrinated into the lifestyle of hatred and anger. Mike Burden lived with no goal or joy in his life.  When Griffin bought a closed movie theater, he turned into a weird little ‘KKK Museum’. Mike and all of his other friends thought that was a great idea. One person who did not share that idea was a local pastor at a Black church, Reverend Kennedy (Forest Whitaker).

Mike then met Judy (Andrea Riseborough) and they strike up a romance. Judy has a young son, and Mike feels the need to give the youngster protection and wants to help raise him. Judy knows that Mike has been living a racist lie for so long; he does not know how to quit. Tom Griffin still thinks Mike is an honest Klansman, and he gives Mike the deed to the new KKK Museum. Mike still has run-ins with more Blacks, whom he mistreats (and sometimes beats). But slowly, with Judy’s help and assistance, he begins to see beyond the white-sheeted future that Tom Griffin had in store for Mike. Mike examines everything that he has ever done and knows that he has come up short. His hatred and rage has consumed him, but he knows there is another way.

Mike Burden has a change of heart and tells Tom Griffin that he wants out. He is out of the Klan, out of the cycle of hatred, and out of the small-minded thinking of white superiority. But he has no way to get out of that town. He and Judy are soon stuck with no place to live and no jobs to generate income. Judy and Mike, along with Judy’s son are destitute. But Mike is free from his miserable past being angry all the time. But since Griffin has friends with all the town’s cops, he makes sure the pressure is put down hard on Mike. He has no place to go, until by chance – he meets Reverend Kennedy. The good Christian minister decides to open up his heart, and his home, to the needy family. Kennedy’s wife and son are less than thrilled with a former Klansman in the house.

Tom Griffin does everything in his power to make Mike Burden regret his choice to exit the Klan. Mike gets a job with an all-black work crew. He works with a guy he remembers from his early school days, a friendly Black fellow named Clarence (Usher). But Mike is grateful for the job, but he still gets into a tussle with his supervisor. Mike seems as though he will never change. But then remembers something that Tom Griffin gave him a while back, and he talks it over with Reverend Kennedy. Wouldn’t it be funny if the Black church that Kennedy runs somehow got control of the that old building in town that Griffin is using to house the ‘KKK Museum’. Well, it does seem that God works in mysterious ways…

“Burden” takes an interesting story that centers on a man meny would find despicable. But Garrett Hedlund does a superb job of making Mike Burden a person bigger than a stereotypical ‘Southern Cracker’. He shuffles, moves his shoulders, tilts his head and holds the wad of ‘chaw’ in his mouth so truthfully – you would swear that he is keeping a white hood in his back pocket. But as the movie progresses, Mike starts to turn a corner – and Hedlund takes baby steps to make Mike seem stronger and more open. Andrea Riseborough also is wonderful as Judy. She shows that Southern woman who is usually kept in a weak position does not need to act weak. She loves her son, and she loves Mike – and showing him a way to change that is best for all involved. Forest Whitaker does a decent job showing the toll that all the turmoil now in his household is having on him.

A couple of other recent movies about true events that involve the Ku Klux Klan have been made recently (“Best of Enemies” and “Blac KKK lansman”). Now this movie, “Burden”, is more focused on a couple of individual – rather than a whole town or a local police investigation. Watching these other movies gives you a bit of an education and both are enjoyable. But then follow it up with this movie – and it won’t even be a ‘Burden’…

Opens on Friday March 7 – in Phoenix area – will play exclusively at the  Harkins Camelview.

@peepso_user_49128(ipaczal) I really liked this movie, especially because of the performances. Mike Burden comes off indeed as a despicable character, who is does terrible things, but I appreciate that they went with this seemingly honest portrayal, rather than saying "he was always the good guy at the bottom of his heart, he just got bad company".
1 person likes this

@peepso_user_45175(JMcNaughton) It is very much like the 'Nature vs. Nurture' argument. If he had been brought up with different circumstances,there would be no doubt that Mike Burden would have turned out with a better attitude and with more compassion...
1 person likes this

@peepso_user_49305(tjusgorjus2) I didn’t know what to expect, but with Forrest Whitaker as a main character and the movie plot, I was all in come what may. I enjoyed the movie in spite of the movie synopsis, because it’s a subject that AmeriKKKa has woven within its society...sadly. I think, given more time, Mike Burden’s character would have been better developed from the beginning. It was a great movie, with a sensitive subject.