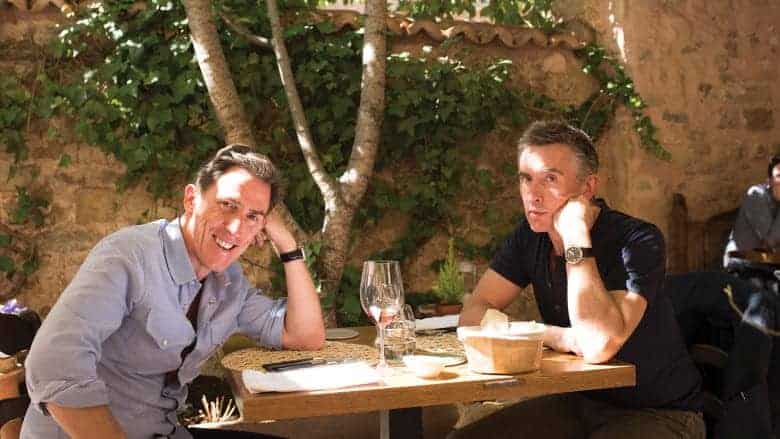 Two good friends, Steve Coogan and Rob Brydon, have taken journey’s together eating wonderful food while Coogan writes about their experiences at the restaurants and the food they enjoyed.  The Trip to Spain is the third adventure they’ve had so far.  The first go-round was to review the best restaurants that the UK had to offer.  He was thrilled with the opportunity but when his girlfriend couldn’t join him, it was Rob who took her place.  Rob and Steve are very similar and constantly nag one another but they got through the trip without killing one another and the writing was successful.  Their second trip was to travel around Italy.  They went to Rome and Tuscany and though it has the same spirit, their travels and the film itself wasn’t quite as entertaining.

Well, the boys have decided to do it once again and I’m very pleased they did.  Here, Brydon will work on a series of restaurant reviews while Coogan fits in time to put pen to paper on that new novel.  They take a week to wine and dine their way through beautiful Spain, enjoying one another’s repartee while basking in the magnificence of the scenery around them.  I’m not sure they take enough time to truly appreciate where they are for they are probably cracking wise too often to take it all in but director Winterbottom makes sure that we absorb the beauty of the land.  Once again, we go through every breathtaking moment of the trip simply in awe of where they are and what they get to do for a living and he makes the film better by accompanying the backdrop of Spain with the most marvelous music.  He takes us through the winding roads, the tiny villages and into the kitchens of the restaurants as the food is being prepared.  Most of the dishes will have you wanting to jump through the screen to join them.

And then we have Steve Coogan and Rob Brydon.  It seems Coogan is having a rough time of things.  When the trip started, everything was fantastic but as we move further and further into the week, more and more of his life seems to get complicated and plans begin to fall apart.  On the contrary, Rob’s life couldn’t be better, especially since he can get away from his crying baby for a week without question.

But evading everything when he can and concentrating only on the trip, Coogan battles Brydon as he did before in impersonating stars they romanticize and respect such as Robert De Niro, Sean Connery, Mick Jagger and John Hurt.  One of the best moments is when they, like a couple of gossips, discuss men having children too late in life.  They take it deep with how old Jagger was when he had his last child.  Never being able to avoid doing it, they both give their best Jagger impression and then get into specifics of why theirs was better than the others.  It’s a classic moment because they then start feeling their age but bury it quickly by adding they feel they are in the ‘sweet spot of life.’  I don’t think either of them convinced the other of that either.

This banter continues throughout and rarely gets old.  Speaking of never getting old, Brydon takes out his ‘small man trapped in a box,’ at one point and when the topic of the death of so many celebrities enters the conversation, they examine another favorite; David Bowie.  Coogan defines Bowie’s death as almost an ‘artistic act’ and starts to sing some notes.  Rob topped Coogan with explaining how he found out that before his death, Bowie followed him on Twitter.  This, of course, could never beat Coogan’s relationship with Dame Judi Dench or his Oscar nomination for Philomena so, of course, there’s plenty of time to mention this in case Brydon has had a chance to forget.  There are several musings which are hashed out in the previous films brought up again in this one but this adds to the charm of this The Trip to Spain.  It proves these characters know one another very well.  You buy into the characters more and by doing this, it makes you feel like you’re a part of this friendship, as well.

As if it would be hard to tell they were fans, they give a nod to Monty Python’s brilliant work and award a fair amount of time to the Spanish Inquisition.  Being a big Monty Python fan, I applaud them for this decision.  Python has touched us all at some point so it was special to see them included here in this very witty film.  They also talked about Terry Gilliam’s work.  The dialogue surrounding this accomplished writer/director’s is another highlight as they get into how much they value him.

The film isn’t perfect because I must point out that on occasion, Braydon did get irritating.  The most bothersome is when Coogan explains the history of the Moors, and is even getting a little political, Brydon constantly interrupts with his Roger Moore impression.  I was enjoying what Coogan was saying and the interruption by Brydon was a bit much but, again, it makes the film authentic and maybe this was the intention.

At the end, with Coogan blissfully upset that he is being dropped by his agent, replaced as the writer of an upcoming film, his son (who he was looking forward to seeing) can’t fly in now… he’s feeling lost.  That said, the ending couldn’t have been better.  The trip wraps up with the line, ‘It’s always good to say goodbye in the mist.’ Steve is left alone and when you think things may turn around for him… they don’t.  We are perfectly set up for The Trip to…???