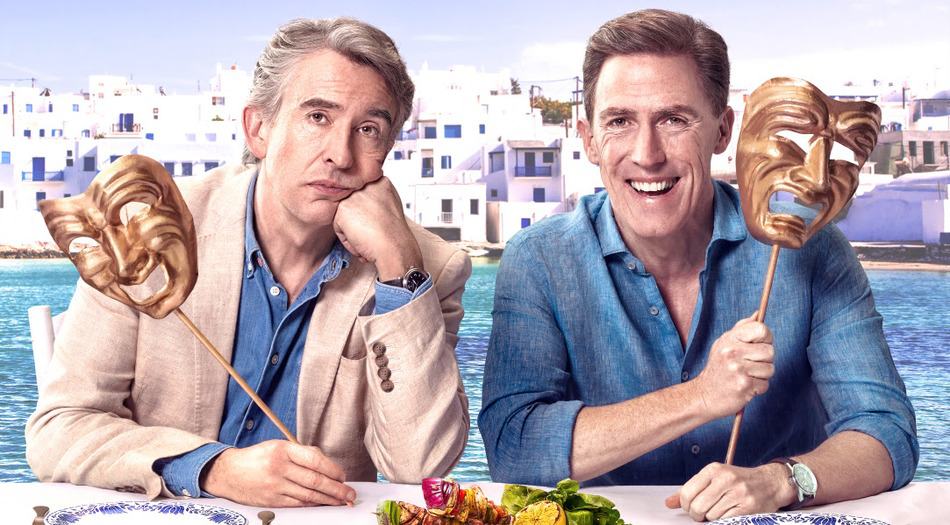 Watching one of Michael Winterbottom’s ‘The Trip’ movies is always an enjoyable experience. That goes without saying. However, it was quite sad to learn that this is the final chapter in the series. If you haven’t watched any of them yet, DO! Can you start with this one? Yes. That’s not a problem.

In ‘Trip to Greece’ as with the others, good friends Steve Coogan and Rob Brydon take a trip together. In fact, that’s the premise of all the films. Each dives into a different area of the world and is unique in the perspective of the land and in how they represent themselves. These movies also give you beautiful views of the city the men are venturing into. This one is no different. Ariel shots following them through country roads and towns will take your breath away. Then there’s Coogan and Brydon themselves. They’re the real justification for watching a movie about two men on a journey. They have unbelievable chemistry. Their lengthy conversations (most of it through improvisation), about scenery, food, women, themselves, and their work, as they sip wine in the most gorgeous of dining rooms and cafés, are highly entertaining. You get all of that, and you may also learn about a place you’ve never visited. Case in point, I’m now dying to go to Greece. Time to plan.

In each film, they purposely set an agenda that chronicles moments from the past, so there are deeper grounds for them to be at the location, rather than just two men on vacation or on assignment.

Here, they are retracing Odysseus’s journey home, from Troy to Ithaca. They spend time in the Temple of Apollo at Delphi, the Ancient Agora of Athens, the Ancient Theatre of Epidaurus, the unique island of Hydra, Nestor’s Palace, Niokastro Fortress in Pylos and the Caves of Diros, where they sing. These locations will blow you away as much as their discussions, and singing voices will.

The conversation about Lesvos leads to a curious exchange between the two. Especially when they say they think staying at the ‘hotel Lesbian’ would be a dream of theirs. This comes from a moment when it’s declared that the word Lesbian comes from the name of the island Lesvos. Who am I to question them?

In another scene, they go on about battles and origins of the word Marathon. That and also where the word Nike was first heard. Hey! I learned that Nike was the Goddess of Victory. Steve goes on to tell Rob he’s done a marathon. Through the word marathon and because of their love of film, they go into Dustin Hoffman’s performance in ‘Marathon Man.’ This then leads to thoughts on, and impressions of, several of his other movies and their co-stars. These transactions are quite humorous. I particularly liked them talking about how they think they look better now that they’re older. That’s what they’ve been told. Going on about the historical marker they’ve just stood in front of also makes this film enjoyable. The comedy will have you clamoring for more. There are plenty of laughs, but there’s also melancholy. In fact, Coogan has to leave early due to the death of a loved one. These scenes are handled really well as it shows Brydon staying behind with his wife while an emotional Coogan deals with complete heartbreak. They’re apart but have never been closer.

I don’t know exactly why they feel the need to end their treks within ‘The Trip,’ but I hope Winterbottom changes his mind and soon gathers Coogan and Brydon together again to take us through another outstanding destination.

CATCH UP ON THE ENTIRE TRIP COLLECTION

The Trip to Greece