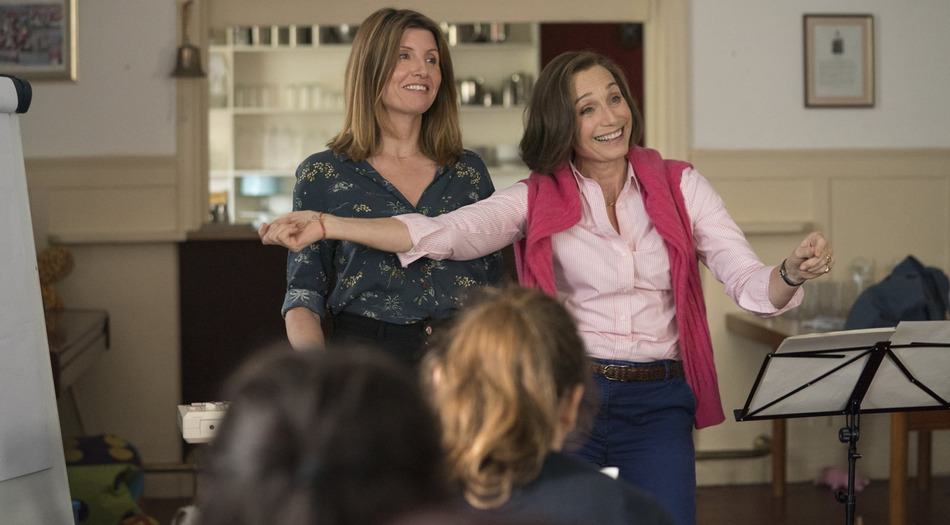 Because of what the world is dealing with, ‘Military Wives’ just might be the perfect movie to watch at home with the family. It has a positive message, and it’s an admirable feel-good story based on actual events. Those events revolve around a group of military spouses who need what we all need right now… something to do to keep us busy.

While their partners are serving in Afghanistan, they’re left behind on a military base near London. As you’d imagine, they are anxious, worried sick, and lonely. After a few meetings, they have some debate about what they’re all good enough at to form a club around. They agree rather quickly that they have rather pleasant singing voices and enjoy music, so they decide to create the very first, of what is now seventy-five chapters strong, Military Wives Choir.

I’ll admit it’s formulaic, but when one thinks about it, formulas continue to be used for a reason. The reason is that they work. In this case, we have a delightful, well-written story with characters you can relate to, coupled with veteran actresses working with qualified, young talent to bring out the best in the script. As a matter of fact, that also happens to be precisely what’s going on in the storyline, as well. The older women, who’ve already seen their husbands march off to war before, or have lost someone close to them, are there to help the younger wives on the base deal with loneliness or loss if and when it hits them. They support one another no matter what.

Kristin Scott Thomas (Sarah’s Key, The English Patient), plays Kate, a veteran of waving goodbye to her loved ones. Her husband, Colonel Richard (Wise), has been on several tours. Being the wife of a Colonel, it’s assumed that Kate instigates the goings-on with the spouses when those in the service of their country are away. She seems to be a natural leader but also an overly ambitious one. Never afraid to be overbearing and firm when needing to be, Kate sometimes rubs people the wrong way. If anyone needs their minds refocused, it’s her. The group and the normalcy it offers her is incredibly essential… even if she doesn’t see that right away.

Kate isn’t interested in doing so, but she ends up splitting leadership duty with Lisa, played by Sharon Horgan of the comedy ‘Game Night.’ The other women appreciate their differences. What works is in how each woman grows, no matter their place in line, when they set their diversity aside and accept one another. Lisa isn’t afraid of letting Kate know exactly what she feels, which Kate’s not used to experiencing. One expects, almost demands, a certain kind of respect, earned or not when their husband is the colonel. That being the case, it’s kind of fun watching her get put in her place. One example is that Kate is overly aggressive about going through scales; Lisa will have none of it.

They both do an excellent job of getting the choir ready to sing in front of an audience. Lisa made sure they were getting fun songs to sing, such as ‘Time After Time’ by Cyndi Lauper and ‘Shout’ by Tears for Fears. Because of this, and larger interest builds, and individual members begin to stand out. It’s clear that everyone is improving, having fun, and lightening up. They’ve made so many improvements that they’re invited to London to perform at the Royal Albert Hall at the Festival of Remembrance. They’re equally excited and nervous about the opportunity they’ve been given to perform live.

There’s a lot of conflict and hardship in the story, but there’s also a bit of humor. There’s a funeral that will have you in tears but also fights that will leave you speechless. Most of the movie is covering the choir, but the moments when real life creeps in is what makes the film so relatable. Because the plot is so obvious and you know which direction the movie is steering, the subplots make this film.

You can’t go wrong watching ‘Military Wives’ this weekend. I recommend it for all the little things that stand out in the script, the singing, and the cast. Enjoy! See this starting today! Here’s how:

* Free to stream for Hulu subscribers*

@peepso_user_43438(Kate3) Looking forward to catching this with my sister, who happens to be a military spouse
1 person likes this