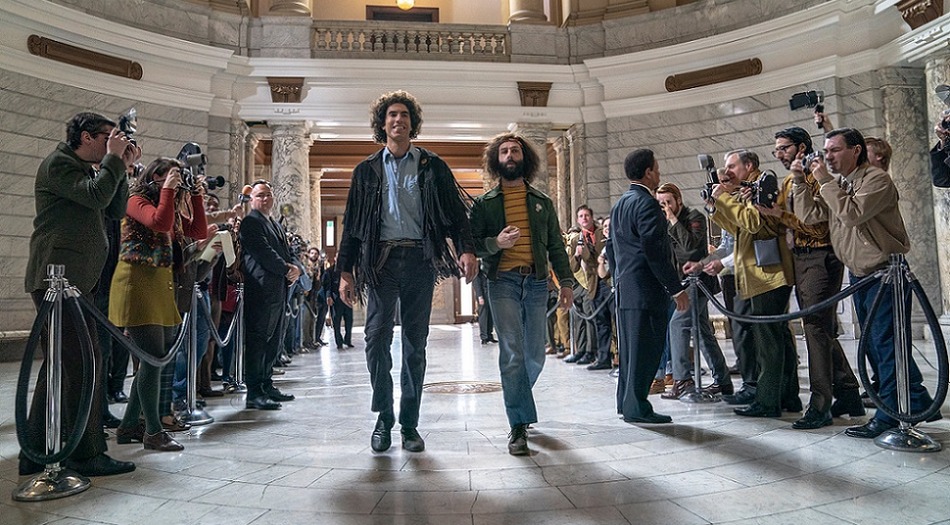 In Aaron Sorkin’s film, ‘The Trial of the Chicago 7,’ we learn of the seven political radicals’ notorious trail, who were arrested in 1968 before the Democratic National Convention.

The film is based in 1969 after they were charged for organizing a protest and inciting a riot. Right away, and quite rightly, we meet the men, one by one, to familiarize the audience with not only where they fit into the story but to get to know their personalities. The trial is one of the most well-known in our history, not only for what justice did or didn’t do but also for who these seven people were. They hated the War, they were angry about the dead, and they were disgusted about the fact that 500 unarmed Vietnamese civilians were slaughtered at the hands of an Army company. That last bit was something not yet commonly known.

The defendants, not fans of the Vietnam war, were Rennie Davis and Tom Hayden, leaders of Students for a Democratic Society. Then there were two ‘Yippies,’ or leaders of the Youth International Party, named Abbie Hoffman and Jerry Rubin. There was also a pacifist involved. His name was David Dellinger. Dellinger was the chairman of the National Mobilization Against the War. The other two were named John Froines and Lee Weiner.

For you, knowing their positions in the event is helpful, so pay attention when they’re introduced.

At the beginning and for most of the trial, an eighth member joined them at the defense table. His name was Bobby Seale. Seale was a black man who was a co-founder of the Black Panther Party. Bobby knew right away that he was only there to intimidate the jury, but no matter what he did or said, the judge wouldn’t listen to him. Bobby wasn’t one to sit and allow maltreatment of his person, so he stood up for himself whatever chance he could get. His attempts to get through to a judge who was deadest against him doing so, got him bound and gagged, beaten, and eventually sent to jail for contempt of court.

During the trial, they all received plenty of media attention. This was something they wanted since it usually worked to get their message out about President Johnson, increasing the number of soldiers that died every day. It also worked in other ways. The seven needed the citizens of America to see how the judge, a man half off his rocker named Julius Hoffman, played rather convincingly by Frank Langella, was treating them.

Mark Rylance, from ‘Dunkirk’ and ‘Bridge of Spies,’ plays their attorney, William Kunstler. He’s a principled man who seemingly knows the law better than the judge, or at least not to bring bias into the courthouse. He knew how to handle the judge and refused to let him push his defendants around. He does everything he can to get through to judge Hoffman, who Kunstler was convinced had his mind made up before the trial even began.

Sorkin keeps us in the trial for an extended period of time before he starts showing flashbacks of what happened the night of the riot. With his handling of similar dramatic and political narratives such as ‘The American President’ and his giant hit, ‘A Few Good Men,’ you’re well entertained throughout the film. The brilliantly written script, also penned by the director, is penetrating and stimulating, but what else would you expect from a Sorkin film? The dialogue gives us several heated exchanges between individual parties, which makes this well worth the watch. That said, so do the actors. While Sorkin takes on writing and directing tasks, actors Sacha Baron Cohen, Joseph Gordon-Levitt, Frank Langella, Yahya Abdul-Mateen II, Eddie Redmayne, and Mark Rylance are responsible for keeping you glued to the screen. I predict that’s where you’ll be once you start watching this two hour and nine-minute movie. It’s not a bad place to be considering who all was involved in getting you there in the first place.

Two other notes of interest. Pay attention to what the film is saying to you. How far will your government go to stop you from having a voice? Shouted at the end of the film is, ‘The Whole World is Watching!’ That it is.

*Stay for information on the Chicago 7 after the film is over.

*For more information, go to www.netflix.com/thetrialofthechicago7

The Trial of the Chicago 7

@peepso_user_45675(ShariK.Green) Thank you for sharing these!!