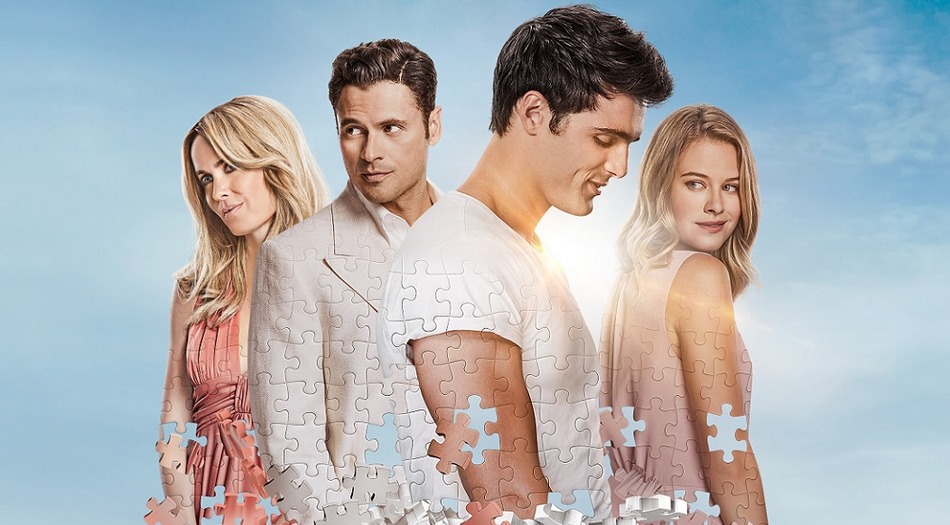 This film is based on an emotional true story. ‘2 Hearts’ is about two men, two couples, and two noticeably significant life-altering events.

We start by getting to know a young man named Chris, played by the young Australian actor, Jacob Elordi. He’s a college freshman who falls head over heels in love with a student he bumps into named Sam. Sam is played by Tiera Skovbye. In a short period of time, she helps the boy grow up and start taking life more seriously, especially his schoolwork. He likes to goof around with his friends, who regard him as the slacker he is but see an observable, and positive difference in him since he met the young woman. One substantial change in his life has to do with her philanthropic endeavor called ‘Safety Buddies.’ For people whose driving is impaired, she picks them up in her car and drives them safely home. She enlists Chris to help her, which, since he’s so obsessed, he’s more than happy to do. However, and oddly considering his age, he has never gotten a driver’s license. Along with improvements in his schoolwork, she helps him get his license, too.

When we first meet Chris, he gives us an introduction to the other man involved in the film. After Christ tells us in voiceover that ‘life happens for us, not to us,’ he tells us about the young Jorge, played by Adan Canto from TV’s Narcos fame. Jorge is from another place and time altogether. Their roads will converge later.

The doctor told Jorge’s very wealthy parents that their son would not live past a certain age. As his life went on each year, they refused to accept the doctor’s opinions. All the same, since he might have been living on borrowed time, they make the best of what they have, and they want the best for him. When he meets a flight attendant, Leslie, played by Radha Mitchell from the outstanding film, ‘Man on Fire,’ the family tries to get him to end the relationship. His parents only push him closer to Leslie because the next time he sees her, he proposes. She says, ‘Yes.’ She has told him that she wants a big family, which becomes an issue later in their marriage.

While Jorge pretends he’s as healthy as an ox, the audience being steered in a specific direction has already begun. You could think the story is going one way, but you might not be accurate. No matter the picture your imagination is creating for you, what happens near the very end is largely well done. The message is essential, and the plot is relatively strong. Sorrowfully, some of the script, particularly when it comes to Chris, is childish and prosaic to the point of boring you to tears. He comes off immature, even when he was supposed to have grown. That said, if you like intense love stories and getting emotionally involved in the characters, ‘2 Hearts’ is for you. It’s slow, but you’ll enjoy the end result.

Produced by: Conrad Hool (The Air Up There, Flipper) and Lance Hool (Missing in Action, Man on Fire). The Director of photography is Vincent De Paula (“ReBoot: The Guardian Code,” Don’t Let Him In). Executive producers are Aaron Au (“Firefly Lane,” Elsewhere), Shawn Williamson (The Company You Keep, “The Good Doctor”), and Veronica Hool.