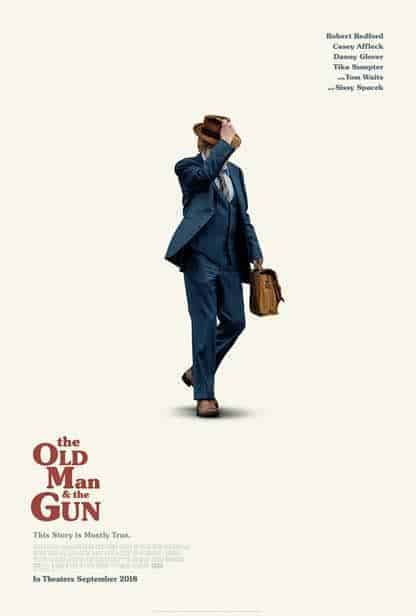 ‘The Old Man and the Gun’ is one of the most curious films of 2018, so far, that’s for certain. I’m not saying I disliked it but it’ll take some maneuvering to describe just what it was I liked about it. You’ll see what I mean by that when you see it and I recommend that you do. The way the story is told is incredible. It’s set in the 80’s just as the country was coming out of the 70’s with its long hair and darker colors but before florescent clothing and the mullet hairstyle hits. The country is open to change but isn’t quite there yet. To structure the film properly, Director David Lowery used all the tools he could, such as a grainy, VHS quality look to the picture, its comfortably casual canter, it’s pitch and vernacular appropriate for the time and as I mentioned, the drab color scheme everywhere. He doesn’t miss a thing. What’s particularly special is this… to make it feel even more real Lowery uses clips of Redford from films of his past. Very clever.

Lowery designs his films in such a way that you get deeply involved in the characters and take the utmost interest in their survival and success; no matter what it is their entangled in; good or bad. Honestly, I thought his film ‘A Ghost Story’ was one of the best and most overlooked films of 2017. Like ‘A Ghost Story,’ people may not appreciate ‘The Old Man and the Gun’ or see the brilliance right away but given the talent involved, I do hope you overlook any criticisms and view it despite anything you hear. It’s different but there’s nothing wrong with different. In fact, it’s refreshing.

Redford plays Forrest Tucker who has spent most of his life in and out of trouble. He’s been in prison and has escaped over fifteen times for which he has become famous. He even escaped from San Quentin. Did I mention this was based on a TRUE story?! So, we meet him, learn of his criminal activity and then move directly into discovering who he is on the inside. He meets Jewel (Spacek) and is smitten with her right off the bat. He tells her who he is and what he does, but she doesn’t believe him. No one would be honest about a thing like that, right? He’s an elderly, seemingly trustworthy fellow and is very kind so she warms to him as they sit in a café getting to know one another. This is what’s so exceptional about Lowery ’s technique. He makes us aware of the two-sided nature of Forrest that even Forrest isn’t cognizant of. You, as does Jewel, immediately like his gentle personality.

As you watch, you see that one side of him just wants to do what it’s told it can’t do. This is what he and his friends have been doing for years… robbing banks. He’s the gangs’ guy who nonchalantly strolls in, tells the bank manager or the teller that he’ll need their money and he exits with no fuss. He always keeps everyone calm, doesn’t bring attention to himself by smiling, being polite, hurting no one and then he leaves.

He and the audience are aware that perhaps his age has brought him to a moment in time where he’s finally conflicted with this side of him. Maybe it’s time to stop running and settle down?

Detective John Hunt (Affleck) knows of Forrest after he and his son happen to be inside one of the banks he robs. He makes a personal commitment to himself to bring this thieving gang of old-timers to justice. The character of John Hunt isn’t all that impactful at first but toward the end of the film, you realize how important he was in the grand scheme of things. As his search widens, he gets to know Forrest more and gets to respect the man he was and who he’s become.

I told you this would be a bit difficult to analyze for you but let me finish with this. It’s short, it’s a fascinating mix between comedy and drama and the cast is spectacular. It opens this weekend. Go see it. I can’t think of one reason for you not to.