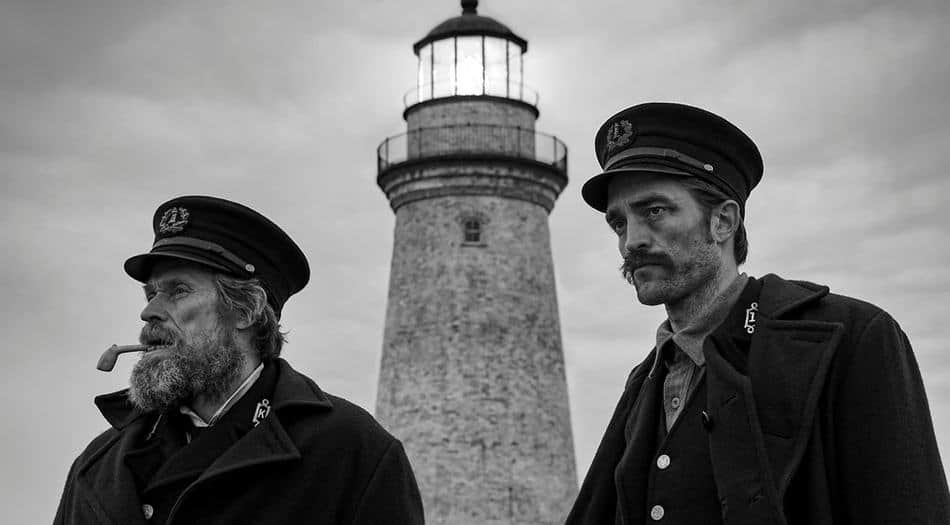 The opening of ‘The Lighthouse’ reels you into 1890 rather quickly and very skillfully. It was shot in 35mm, to be as beautiful as it could be, but then is taken down to the dimensions of the early sound era of filmmaking, which would be 1.19:1; more of a square. This move is intentional as it’s the size that was commonly used in the period with which the film is set. Doing this takes the audience deeper into director Robert Eggers’ (The Witch) lighthouse in a way that couldn’t have been achieved without that decision.

Going with those small dimensions helped accentuate a feeling of being boxed in. ‘The Lighthouse’ quickly became a festival darling. Eggers used black and white images, too.  That created an even more visually magnificent film. It’s shot so beautifully; you feel as though you’re walking through an old photograph. Better said, you’re looking at a ‘moving picture.’ I know. I know. That’s what a movie is, so don’t pick me apart for making that comment. I just feel it describes what you’re about to witness.

His choice to shoot in Nova Scotia also gives the appearance of the hostile environment and imprisoning terrain so desperately needed to sell the story. It must start and end in the same timbre, and it does. On top of that, the sound engineering is exquisite. Birds are flying overhead, rain, wind, the stirring seas, and the foghorn penetrating the air through the speakers, pounding in the heads of the characters… it’s just as impeccable as the visuals.

The attention to detail, the little things such as Thomas Wake’s (Dafoe) farts, burps, and disturbingly loud snoring and Ephraim Winslow’s (Pattinson) resentment of Wake’s bodily functions, draws you into this mind-blowing masterpiece. The two actors, yes, only two actors carried this entire production, were incredible. Don’t let the idea of a small cast turn you away, thinking the movie possible not entertaining enough.

We meet two lighthouse keepers, one rather on in years, and one trying to make a fresh start, as they work their four-week work shift on a remote island in New England. We watch Wake attempt to avoid the doldrums, something he sees as evil, and try to drag a conversation out of his assistant. However, Winslow isn’t interested in getting to know the eccentric old Sea Captain and doesn’t want Wake getting to know much about him either. Any more than he needs to that is. Wake gives up; they fight, he tries again.

The film goes back and forth from the men wholly offended by the behavior of the other to times when they’re dancing cheek to cheek. Anything for some human contact, so they don’t turn into animals.

Wake has already drifted into mania long ago, but the story arc here shows that though you may have thought Winslow somewhat sane, he’s no more lucid than his boss. This story is laid out very slowly for you on purpose as you watch the younger of the two men, become what he has grown to loathe.

Wake does none of the grunt work; he only tends to the light. Why? As animosity builds, so does Winslow’s disregard for specific warnings. The killing of a seabird is a bad omen. He’s told that they carry the souls of fallen sailors who have met their maker. Well, once dreams of beautiful mermaids and his masturbation no longer work to keep him somewhat levelheaded or to cure his loneliness, the life of a gull no longer matters. Winslow kills a seagull in a mad rage. It’s quite disturbing but propels the story forward in a more measure clip from that moment on. By the way, the seagull in question could be considered a character, so I guess there are three actors?

With this, Eggers says a lot but leaves you with a lot of questions, as well. Its madness and the hysteria in the performances will leave an indelible impression on you. So much so, I know I have to see it again. Was any of this real? Are Wake or Winslow in an institution somewhere?! I’ll watch again to ferret that out.  I wasn’t crazy about Eggers’ first film, ‘The Witch,’ but after watching the insanity of the psychotic relationship delivered to us in ‘The Lighthouse,’ I’m looking very forward to his next movie called, ‘The Northman.’ I do not doubt that it’ll be unique and that he’ll keep improving every step of the way.

*If you’re in the Phoenix area, ‘The Lighthouse’ opens this Friday at these locations: