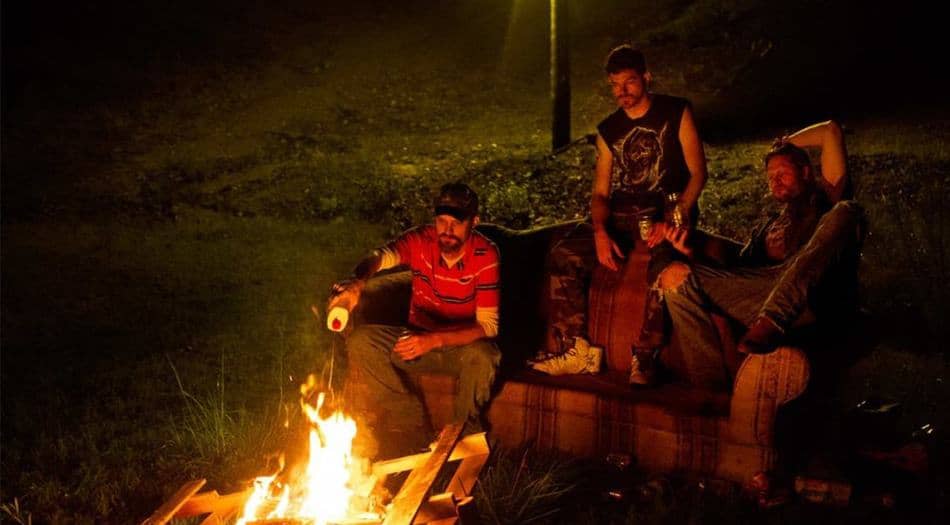 The film is set in rural Alabama. The story centers around characters three main characters which are the stereotypical ‘white trash’ types. This group of three friends are, Zeke Olsen (Abbott Jr.), Earl Wyeth (Hyland) and, of course, Dick Long, played by the director himself who never mentally grew beyond their high school days. They also continue their youthful antics. Ignoring their families, they get together to get drunk or get stoned or… oops! I almost gave something away. I’ll let you find out that last part on your own. In the opening sequence, we see that the ‘men’ have partied so much that their friend Dick needs some medical attention. They dump him near a hospital entrance and run. Little do they know at the time; they were too late.

Later, Zeke, who has a very inquisitive wife and daughter at home, does his best to keep something about last night a secret. Once the hospital examines Dick, they find out what the big mystery is. What it is, is given to us by way of an investigation after his death. Clues are given, and the tension builds by means of an investigation. In case you haven’t gathered this by now, it’s the why and how Dick’s death occurred that will ultimately shock, possibly repulse you.

Zeke’s attempt at covering up the events from the previous evening, lest the reason discloses too much of what the three men have in common, is what puts the men square in the middle of it all. What’s the famous quote, ‘It isn’t the crime it’s the coverup?’ I was thinking of this quote as I watched these two men, Zeke especially, try to get away with innocently knowing nothing about what happened to their friend. The harder they work, the worse it gets for them. In what I consider to be a weak avenue for a screenwriter to take, Billy Chew has much of the yarn unravel through inadvertent questions and answer sessions with Zeke’s nosey and unusually observant daughter, Cynthia (Poppy Cunningham.) Had this not continually happened, the script would have had a more uniquely crafted style. Though some of it was whimsical, this play was the most disappointing. Cynthia or Cyn as she’s called raises the suspicions of officer ‘Duds’ Dudley (Baker). News travels fast in a small town, and if someone isn’t acting right, it’s noticed and not forgotten.

The female characters that pop in and out of the film, most especially the two female police officers, are especially memorable. The expressions actress Virginia Newcomb makes are priceless. My favorite scene has Dudley questioning an emotionally unstable Zeke in his kitchen. This happens because his wife Lydia (Newcomb), not realizing she’s putting him at risk, calls 911. By doing this, she ends up giving Dudley clues for the investigation that her husband is trying to avoid being a part of.

I’ll remind you that if ‘ya’ll wanna get weird,’ this is the movie that’ll do that for you. Go into it with low expectations, and you won’t be disappointed. It’s a fascinating character study. It includes the kind of light humor, like the fact that Jane is the name of Dick’s wife but can go from ridiculous to unheard of in the blink of an eye. So be ready for it.

I want to mention that it also has an incredible soundtrack which includes artists such as Hinder, Nickelback, Creed, Stained and The Avett Brothers. The opening song was Brenda Lee’s gorgeous rendition of ‘Break It to Me Gently’ that, after hearing, I couldn’t get out of my head.

The Death of Dick Long