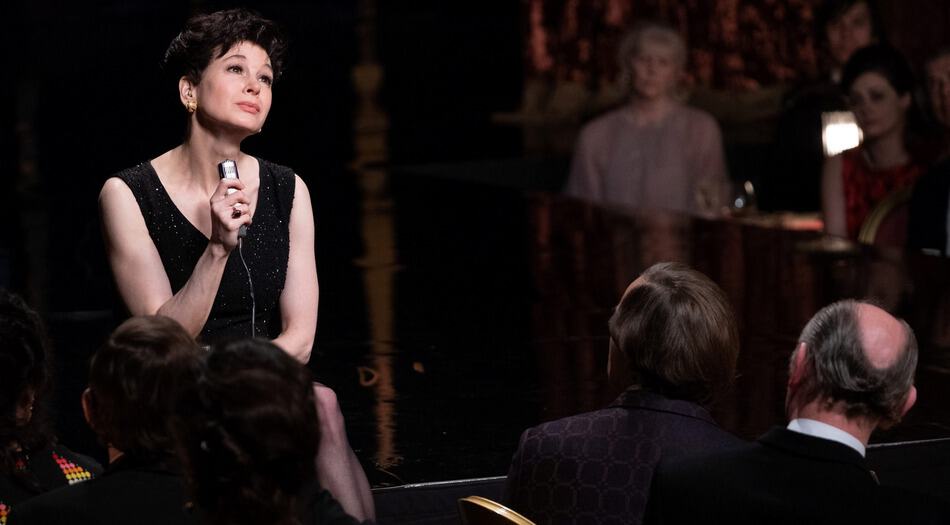 I knew Renee Zellweger could sing from watching her in ‘Chicago’ but… wow! She can belt out a show tune like nobody’s business! If you like her performance in the film, and you will, Renee, who spent a year in vocal training for the role, is going to give you more to like.
She’s about to release a solo album of Judy Garland covers. When you hear her, you’ll see why she made that decision.
However suitable her singing in the film is, and it was magnificent, her portrayal of Judy was equally as good. She dressed like her, stood like her, walked like her, spoke like her. She completely embodied who Judy was. So much so that I thought Renee was Judy a few times. That said, Renee’s accent did fall a bit into Bridget Jones’ territory a few times, but other than that, she did Judy justice. Know that she didn’t make fun of her. She never once made light of Judy’s situation, instead, she shows you how complicated her life was and in doing so, she and the filmmakers behind this project give the late performance artist the ability to reach the people who still, after all these years, admire her work and say, ‘Thank you.’ It’s a fitting tribute to one of the most beloved performers in the history of the silver screen, and she deserves it.

As far as story, the expectations were higher. The film only covers a part of who Judy was as an adult, so it doesn’t go very deep. It would have been nice to see more of her successes but what I appreciated was that it shows you what she went through right before her death at the young age of forty-seven. It also plunges into the past to reveal what made her who she was. Mostly Louis B. Mayer and an out of control studio system which treated their child actors like slaves, working them to death, forcing drugs on them to keep them awake and giving them drugs again to help them sleep. She was never allowed to be a child, never able to have fun, and when she wanted to date, that was out of the question. God forbid she consider eating a piece of pizza.
This movie reveals how devastating an impact growing up in the Hollywood system had on poor Judy. She was treated like a piece of meat, spoken to terribly, and had no one to turn to for help. She was stuck. I’m glad it shined a light on that period of time. We couldn’t know her otherwise.

It’s 1968, thirty years into her career at this point. She goes to London for five weeks to work, but when she leaves America, she leaves everything that matters to her behind. She realizes she can’t bring them with her but is desperate for her children to know that she still loves them. There’s a line in the movie where she says that she doesn’t want them ever to be involved in Hollywood or’ anywhere near the bastards who run it.’ If she can’t be with them, she’ll try and protect them from not allowing them to work in the business that took her childhood. Knowing she needs the money; she performs in London and is treated like royalty. Sadly, she mainly disappoints those who hired her but pleased the audience… for a while anyway.

The last scene of the film is fascinating and memorable. ‘Judy’ is based on Peter Quilter’s play called ‘End of the Rainbow,’ and in the final scene, she breaks down when she starts to sing, ‘Somewhere Over the Rainbow.’ The audience watches her struggle and, very sweetly, a man stands and starts singing it to her. Soon, the entire audience is singing her song to her. They’re thanking her for what she gave up for them, not that anything could make up for what was taken from her, but it’s a lovely thing just to try. It’s very touching and a respectable way to end the movie. She looks at them and asks, ‘You won’t forget me, will you?’ Nope! We never have. ​

Tile of the Film