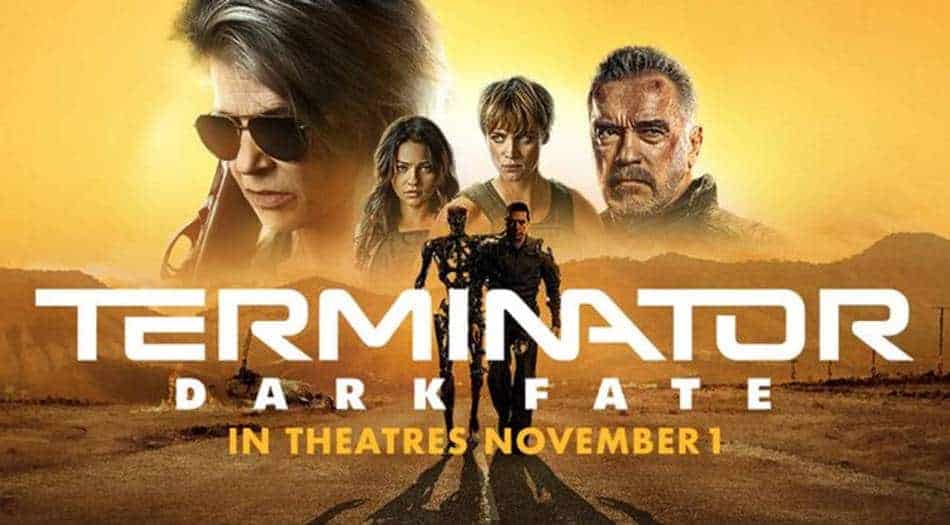 “Terminator: Dark Fate” is a return to form, a flexing of muscles that have not been used since – say – 1984 and 1991? That was the last time that a true James Cameron ‘Terminator’ story worked along with actors Linda Hamilton and Arnold Schwarzenegger. Back then, it was “The Terminator” and “Terminator 2: Judgment Day” that blasted onto the movie screens like a T-800. Big Box Office receipts saw to it that more sequels were made. The three lower quality movies caused interest in the Terminator franchise to fade just like the red light in the T-800 mechanical eye as it is going dark. The mishmash of new ideas and concepts are about to be wiped clean. That is because Cameron will take the “Terminator: Dark Fate” story directly from the ending of T2, and it will ignore the others. That makes this new Terminator a more ‘advanced model’ compared to the other three sequel/reboot attempts.

Sarah Connor (Linda Hamilton) believes that she averted Judgment Day and she and her son John are safe. But down at a beach in Guatemala, a T-800 Terminator (Arnold Schwarzenegger) proves her wrong. With John dead, Sarah lives only to hunt and kill any remaining Terminators. But twenty years later in Mexico City, a new dark force has come back from the future. An enhanced young future woman soldier named Grace (Mackenzie Davis) arrives to protect someone new. That new target is Dani Ramos (Natalia Reyes) who works an auto plant. For some reason Dani gets a new style Terminator called a Rev-9 (Gabriel Luna). This is a killer cyborg that was sent back in time from an alternate (but still dystopian) future.

The Terminator franchise can’t be bargained with.

Dani is on the run from a lethal force called a Rev-9. It can mimic any human that it comes in contact with. But Dani has an enhanced protector named Grace, and she can use her ultra-strong powers to fight off the Rev-9. Grace and Dani find that they have another protector, Sarah Connor. Sarah has been given secret information about any Terminator sent back from the future. So, she is here to put down the Rev-9. There is a big battle on the freeway. But Dani is very confused, and Grace does not trust Sarah – and Sarah does not trust Grace and thinks Dani will be the new ‘Mother of the Resistance’. They are in Mexico, but they need to get to Laredo Texas. Time to (illegally) cross the border.

The Terminator franchise can’t be reasoned with.

The trio get captured by Border agents and taken into custody. The Rev-9 gets there and makes a bloody hash of anyone who gets in its way. The three women elude the Rev-9 and find the source of Sarah’s secret information about the Terminators. It is her old friend Carl (Arnold Schwarzenegger), who is the T-800 Terminator that killed her boy. Before Sarah can make a buckshot sandwich for Carl, Grace stops her and says he can help. The Rev-9 is out to get them, and the more power they have on their side, the better. So, there will be (another) big battle set in the sky.

The Terminator franchise doesn’t feel pity, or remorse, or fear.

There is a final showdown with the Rev-9 coming after Dani and anyone might stop the evil future killing machine. Grace can slow it down a little bit. Carl, the T-800 Terminator drapery man, can slow it down a little bit. Sarah can let it beat her up, thus slowing it down a little bit. But there will need to be a huge sacrifice and a big final battle. The Rev-9 has some impressive powers, but it does not have any heart. So, will Dani be able to walk away and be able to save a future day? Will Sarah Conner finally put aside any mental anguish from her son’s death? Will Grace have the chance to go back to her time and see if she has made a difference? Will Carl ever be able to hang any more drapes for his clients?

And it absolutely will not stop, ever, until you have spent your money on the new “Terminator: Dark Fate” movie…

“Terminator: Dark Fate” is a new opportunity to juice up the Terminator franchise, after the latest attempts have been less than stellar. Being directed by Tim Miller (who did “Deadpool”) is a good start to creating a good movie. Getting original actors back is also helpful to making it a good movie. Getting a story from James Cameron is also a positive sign. Of course, when the final product needed to have multiple screenwriter credits and multiple story credits – that can send up a warning flag. There is a lot of action, and much of it is in a CGI overload. But the story holds together well, and the characters (both the old and the new) do a great job.

But the Box Office will have the ultimate ‘Judgment Day’. That will determine if “It’ll be Back”!